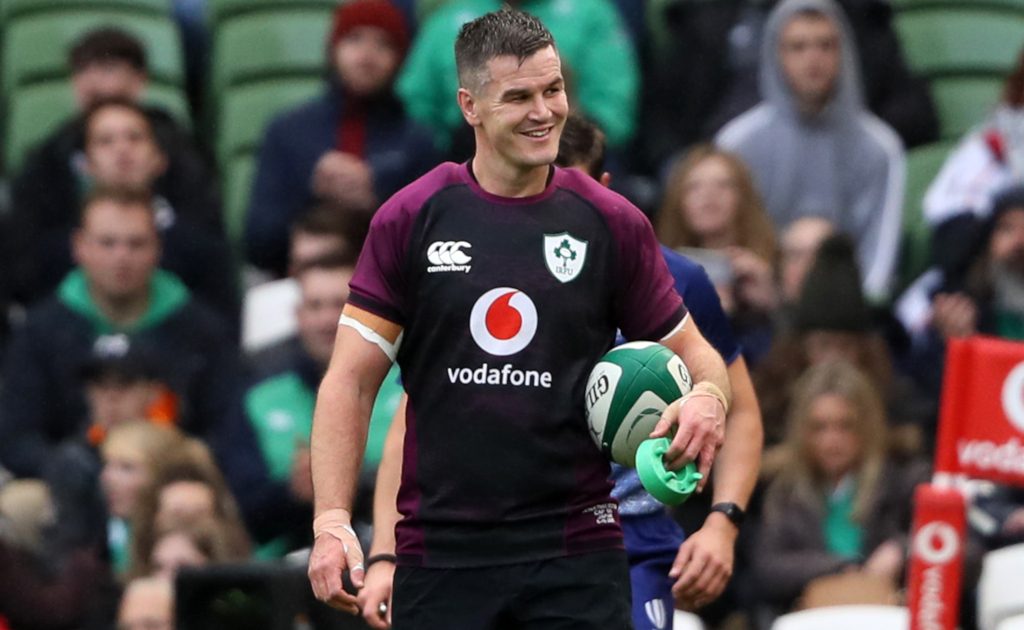 Ireland have been given a major boost after captain Johnny Sexton gave a positive fitness update ahead of the upcoming Six Nations.

Sexton has struggled with injury after suffering knee and ankle damage in Ireland’s impressive triumph over New Zealand.

He was then hit by Covid-19 but has since recovered and got good game time in Leinster’s 64-7 away victory over Bath in the Champions Cup last weekend.

Took time to get back fit

“I had a frustrating couple of months, post the New Zealand game,” said the 36-year-old.

“But thankfully over the last few weeks I was able to step up in training and get back on the field unscathed.

“I was back from the knee injury ready to go and then obviously picked it (Covid) up and was sick for a week or so with it.

“Then obviously it takes a little bit of time to get back fully fit, and then a couple of games were cancelled.

“The first game back was a European game so I blew the lungs out on that, it was a shock to the system but I felt much better last week and hopefully now we’ll train hard this week and it will be another good step in my preparation.

“I know I need to train well to earn my place in the team and my focus is getting as fit and ready as possible to challenge for that spot.”

Ireland begin the Six Nations at home to defending champions Wales on February 5.

With Andy Farrell’s squad preparing for a pre-tournament training camp in Portugal, Ulster captain Iain Henderson is the only major injury doubt.

The 29-year-old has not played since sustaining an ankle issue playing for his province on December 17 but could yet be fit to face the Welsh.

“To sum it all up, we expect everyone bar Iain Henderson to be training fully with us by the end of the week,” said head coach Farrell.

“That’s not to say he’s out of the Wales game yet. We’ll take it day by day with him and see how we go.”

Carbery is competing with Sexton and recalled Connacht man Jack Carty for the number 10 jersey on the back of a fine cameo against New Zealand and a man-of-the-match display in the subsequent win over Argentina.

His availability is a major boost for the Irish, with Farrell declaring him “all systems go”.

“Joey has been keeping fighting fit from week two after his injury to his elbow, so he’s fit as a fiddle,” said Farrell.

“He’s been doing all of the ball skills. The only thing he’s had to wait for is to get the all clear to get back into contact and he’s had that now so he’s all systems go.”

In-form Ireland are on an eight-game winning run following three stylish displays in the autumn.

Farrell is eager to continue the recent progression.

“If you dissect it properly and be honest with yourself, you’ll see how you can do things better,” he said.

“In the scheme of things, you can look at the results and think that everything went swimmingly but in reality it didn’t”

“The week after the Japan game or the All Blacks game, they were irrelevant. We’re on to the next thing.

“This is the start of a new competition that means a lot to all the nations and we know we’ve got to be improving constantly to make sure we’re in with a chance.”

Leinster wing James Lowe was the notable absentee from Farrell’s squad due to a hamstring injury.

Asked if the player could return later in the championship, Farrell replied: “We’re expecting it to be a few weeks, we don’t know how many just as yet. With every hamstring, it takes its own course.

“James is absolutely gutted. He will be doing everything he possibly can to get as fit as soon as he can and we’ll assess it from there.”