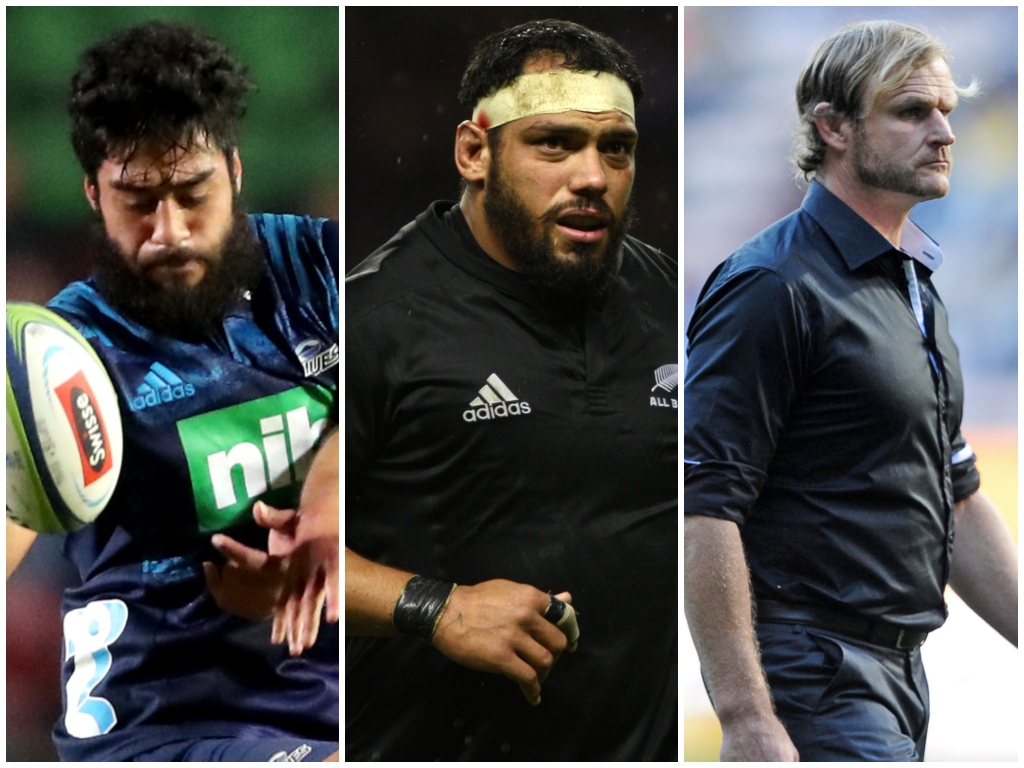 With the start of the 2021 Super Rugby Aotearoa season almost upon us, we delve into some of the talking points with Blues legend John Afoa.

Born and raised in Auckland, Afoa played for the franchise for eight seasons before moving to Europe and plying his trade at Ulster, Gloucester and now Bristol Bears.

The tighthead prop earned 36 caps for the All Blacks and is looking forward to the new campaign where he is expecting big things from his former side.

Blues to challenge the Crusaders

I definitely think the Blues will be one or two. Watching them last year and knowing how Leon MacDonald runs the team, they’ve been building nicely. It will be strange without Beauden Barrett, but they’ve got some good options to deputise. Since Super Rugby started, everyone’s gone after that number 10 jersey but some people say they haven’t had a good fly-half since Carlos Spencer left.

Even in the years I was there, it chopped and changed. We had Nick Evans playing for a little bit, while Isa Nacewa and Jimmy Gopperth also had stints in the 10 jersey. They’ve now got Otere Black, Harry Plummer and Stephen Perofeta, who are all excellent options in that position.

I also love the pack. They will be a serious unit this year, with Nepo Laulala coming up from the Chiefs. They’ve already got Ofa Tuungafasi, captain Patrick Tuipulotu at lock and the loose trio, so I will enjoy watching them.

I haven’t seen too much of the Mitre 10 Cup but I’m backing my boy Akira Ioane to really kick on. If he links with Hoskins Sotutu and Blake Gibson, or whoever it may be in that loose forward trio, the Blues back-row could be the best in Super Rugby. They’ve got size and they’ve got speed, an ability over the ball, ability in the wide channels – they could be a real threat. If I look back, it will be similar to the Jerry Collins and Rodney So’oialo combination, which just dominated.

At hooker, I’ve always been impressed by the qualities of Asafo Aumua. I saw a tackle he made and his headband was flying off at the same time. I was thinking ‘oh my God, that’s some serious force.’ Thankfully I’m not playing against him.

He hasn’t quite made the step up to Test level yet but that could be for a variety of reasons. He may have more free reign at the Canes or Wellington to do whatever he wants, but sometimes that international game is a bit more structured. You have to do that job at that exact moment and, if you don’t, that might ruin everything. There can be less freedom, or sometimes there can be more, but it’s just the ability to adapt and change to whatever level or team you’re in.

😮 Asafo Aumua behaving like a winger! Will he repeat this effort when @WgtnRugby host @crfu this Friday night…#Ours pic.twitter.com/eNRWhdATFS

South African absence a blow to the All Blacks

If you’re not playing the South Africans, you lose that knowledge. If it was the old Super Rugby, you would play the South African teams, you would make the All Blacks and play the Tri Nations or Rugby Championship having already faced that guy. Yes, it’s not international level but you’ve got a feel for them, whereas now, when they’re playing the Boks, taking on Argentina, they won’t have had that experience.

In the front-row, you’re pretty much against them all the time in the scrum and maul, so the players aren’t getting that exposure now. I remember doing an interview and talking about why the English Premiership is so good at the moment and that’s because you have all these international players coming over, giving you this mix of abilities and styles. You might be playing an England international, a Welsh player and then you’re in Europe and taking on a French representative. You get this opportunity to face different teams and players to give you an all-round game or a better knowledge to deal with things.

If it stays like it is and they don’t get as much exposure, I think it might shock them a bit more up here in the northern hemisphere. The games and tours between the respective nations are not as regular, and all they’re doing is playing against each other. Yes, they can analyse and they can look at all the teams, and they’re always going to be strong because they’re well coached, but it’s nothing like actually playing the real thing.

Prospects for the Chiefs, Hurricanes and Highlanders

The ‘Canes are always a decent side but TJ Perenara’s not there, which will hamper them and, while the Highlanders have got some good players, they are maybe not what they were a few years ago when they won Super Rugby.

The Chiefs I imagine will be rebuilding a little bit too. However, the boys down in Hamilton, that’s where the real dislike is. I’ve never liked playing the Chiefs and never liked losing to them. That was a real love-hate relationship. The Canes, on the other hand, was like playing your brother as they were both similar teams, so it was almost a bit of a laugh, while also trying to smash each other.

When I was playing for the Blues, there was an element of the national coaches dictating how they wanted the teams to play. The All Blacks are the main focus and, if they’re doing new techniques, that’s naturally going to flow through the five franchises.

You’re always going to have individuals or little things that might change week-to-week but the majority of those teams are playing very similarly. However, the Crusaders have done things slightly differently with Scott Robertson bringing in Ireland legend Ronan O’Gara and ex-Wales international Mark Jones onto the coaching staff, which brings in a different dynamic.

Robertson’s men have dominated over the last few years, but I will never say the Crusaders are definitely going to win, it would break my heart! I definitely respect them, though, and what they’re about. It’s like a mutual disagreement with a good friend, there’s always some tension there.

My first start was against the ‘Saders in 2004, when Carlos Spencer scored that famous try. Kees Meeuws might have been injured and they said: ‘You’ve got to start.’ Greg Feek had come up from the Crusaders so me and him were playing in the front-row. I remember running, well waddling because it was the last play, out of a ruck and just seeing the boys go. Madness. Carlos then flipped the bird at the home supporters and that’s the kind of relationship we have with them! It was a good day and even better night.