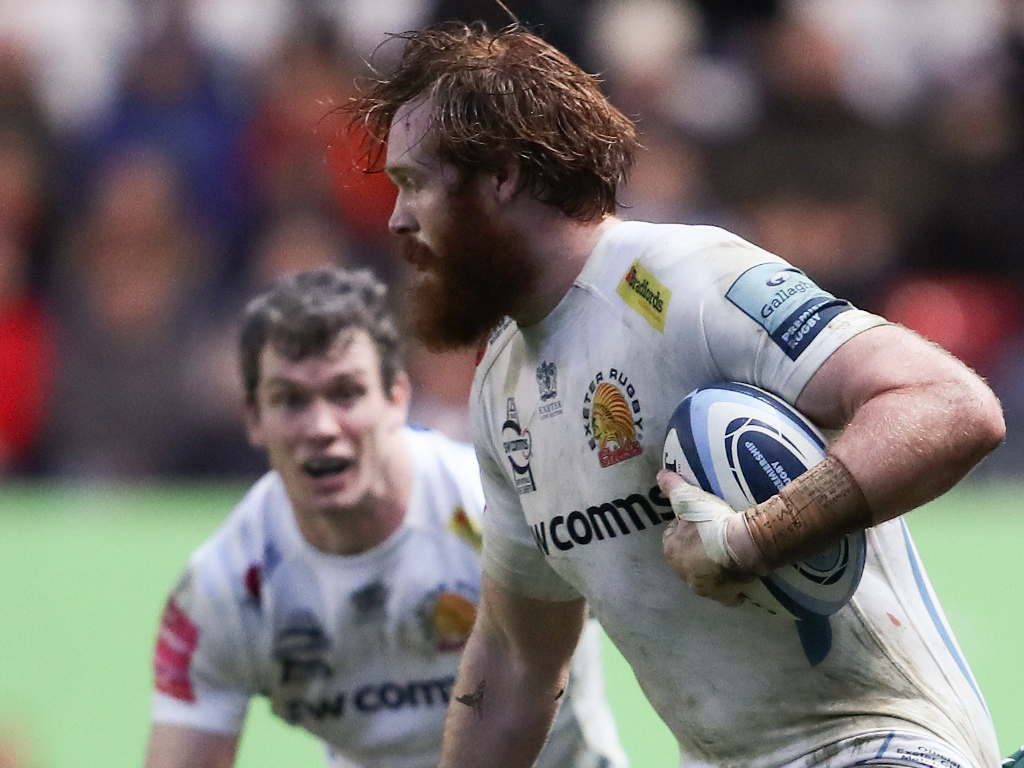 Exeter Chiefs have announced that second-row Jannes Kirsten has committed his future to the Premiership club after signing a new contract.

Brought in last summer as injury dispensation for summer signings Tom Price and Will Witty, the 26-year-old former Bulls forward has certainly delivered on all fronts since arriving in Devon.

Kirsten’s hard-hitting, no-nonsense approach, together with his fantastic work ethic, have not only won him many admirers within the game, but has also seen him establish himself as an integral cog in the Exeter engine room.

With three tries in 22 games already, even Exeter Chiefs director of rugby Rob Baxter admits Kirsten’s form has probably exceeded his own expectations.

“Obviously, Jannes has had a great season so far,” said Baxter. “When we talk to players about coming in and they ask me about what they think we as a club can do for them as a player, I always tell them that we will create an environment here which, if they are prepared to work hard enough, they will thrive in.

“In Jannes’ case, that’s exactly what he has been willing to do. From the moment he turned up from South Africa, he’s just go on with things and done everything we have asked of him. He’s played a lot of rugby and dropped into things very quickly, but that’s down to him and wanting to learn and get involved as soon as he could.

“Initially he showed all the things we knew he had in his game, like his physicality in his carrying and his tackling and that he was a good set-piece forward, but what he has also been able to show over the period of time he has been at the club is develop other parts of his game without losing that input he is having in games.”

Baxter continued: “If I’m being honest, he’s ticked an awful lot of boxes and probably has exceeded my expectations a little bit. The speed in which he has done things and the influence he has brought in games, those are things you hope for when you sign a new player, but sometimes you don’t always get so early on.

“Very often for players their first year is not necessarily their best year, it’s normally a tough year and they start get better and improve over the next year or so. Jannes, on the other hand, has been heavily involved from day one and he has to take an awful lot of credit for that.

“He’s come in and really impressed in a short space of time. It was a big call for him to make, coming over here on a one-year deal, but he’s come in and he’s proved his value, on and off the field, and that in turn has earned him a contract extension.”

🗣️ "For a player like myself, the club ticks every box. It has great coaching staff, a great squad, the culture is amazing and for me, Exeter is home." #GallagherPrem

Alongside compatriot Jacques Vermeulen, the two South Africans have been very much at the heart of a lot of Exeter’s success this season, helping the Chiefs not only lead the Premiership, but to also book their place in the last eight of the Heineken Champions Cup.

The two house-mates have been destructive, on-field forces for Baxter’s side and it’s little surprise their leader has been singing their praises.

“We talk a lot about retaining our players is a big part of what we are about here at the club, simply because they know what we do and what we expect each season,” explained Baxter. “That said, you do need a little bit of turnover because you need everybody to be challenged and you have that freshness within the squad.

“What you’ve seen this season with both Jannes and Jacques coming in is two guys who have got stuck in from the outset and who have helped to re-establish some new challenges in and around the back five of our scrum. It’s fantastic the energy and the enthusiasm that they bring, but they are also helping to keep standards moving upwards.

“Any successful squad has to have good depth to it, but it also needs to be competitive in all areas as well. I’m more than comfortable that guys come in and shake things up within a group. That’s what they have done and in turn it has helped to bring the best out in others as well.”