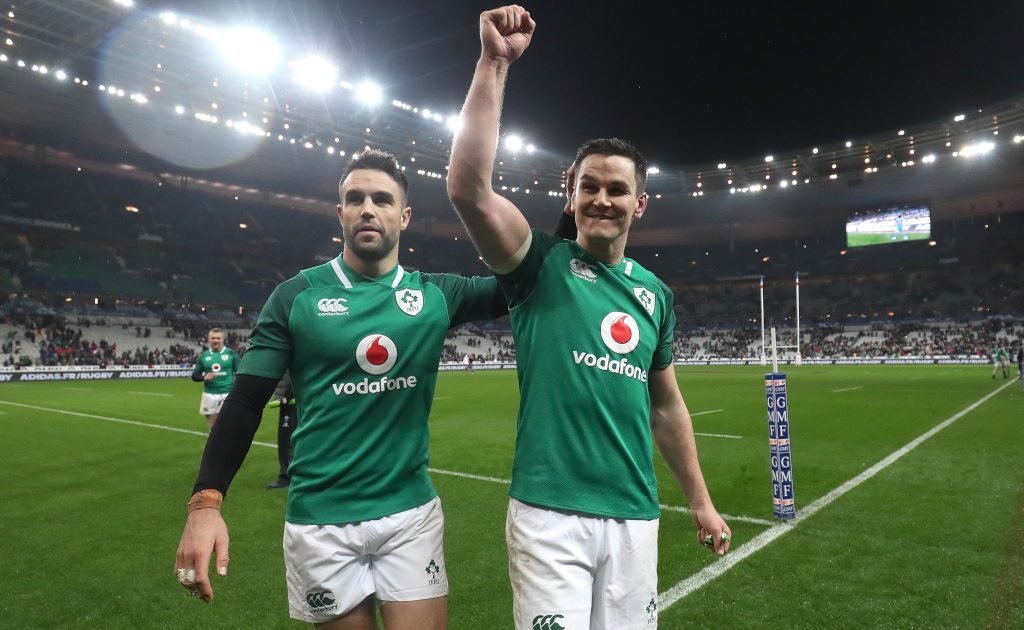 Ireland scrum-half Conor Murray has praised long-time team-mate Johnny Sexton as the fly-half prepares to earn his 100th cap for his country.

The Leinster playmaker is set to start against Japan and become just the seventh Irish player to reach a century of appearances.

Sexton has achieved some remarkable things in a green jersey, helping them to Six Nations titles, a Grand Slam success and two wins over the All Blacks.

As well as his excellent all-around game, it is the 36-year-old’s relentless drive which particularly stands out, as Murray discovered early on in their relationship during the 2011 World Cup.

“My journey in that World Cup was just enjoying the ride almost. I probably didn’t have the level of detail that Johnny was expecting from his nine inside him and I remember we got to the touchline, and he wanted me to play the pod of forwards off the touchline.

“I ripped it out the back to him and hit him, and he wasn’t expecting it.

“He just launched a kick or Garryowen of some sort and the names he called me while we were chasing that kick, it instilled in me really early that I need to be all over my detail and understand what he wants.

“It was just a really quick learning situation for me and it was brilliant, because we laugh about it now, but genuinely it made me realise the level that is required to play international rugby and to be a good nine to your 10 outside you.

“I’ll never repeat the words that he used, but they hit home!”

The Murray-Sexton half-back partnership has become synonymous with modern day Irish rugby and they are just 14 behind the world record held by Australia’s George Gregan and Stephen Larkham.

From the outside, it might appear difficult to be a team-mate of Sexton’s. The fly-half’s desire to win is obvious and at times he can become disgruntled with fellow players.

Murray, however, insists that the Leinster star is just misunderstood and that the 36-year-old is a wonderful person to be around, both on and off the field.

“He’s definitely a unique type of force – it’s quite unique how he guides a team around a pitch and that took a little bit of getting used to,” he said.

“What took me a while to get used to was Johnny’s body language. To people on the outside, when something doesn’t go right he can probably look like he’s giving out a lot or sulking.

“But after a few years of getting to know Johnny, it comes from such a good place. Sometimes he’ll say it himself, that that body language is because he’s disappointed with himself about a couple of phases before or whatever.

“Realising that and realising where it comes from, how he means to take the team to the next level and get all the cogs of the wheel moving in the right direction – he takes an awful lot of responsibility for that and that’s a lot of pressure on him as well.

“That side of him as a leader and a captain, watching him grow I suppose since I started playing with him in 2011 to now, and knowing him as a friend and a personality, he’s a great fella.”

Sexton will also get the opportunity to enjoy the occasion in front of a full house at the Aviva Stadium on Saturday, which has been all too rare during the Covid pandemic.

“It’s unreal that it’s in front of a full house hopefully at the weekend. He’s the type of player that deserves that,” Murray added.

“I think you’ll hear it when he runs out on Saturday, the crowd will show their appreciation for what he’s given to the game and continues to since coming back into camp.

“If he brings his kids into the dressing room afterwards you know how much his family mean to him, and then winning for Ireland to make his family proud, he wears his heart on his sleeve and it’s such a cool weekend for him.”