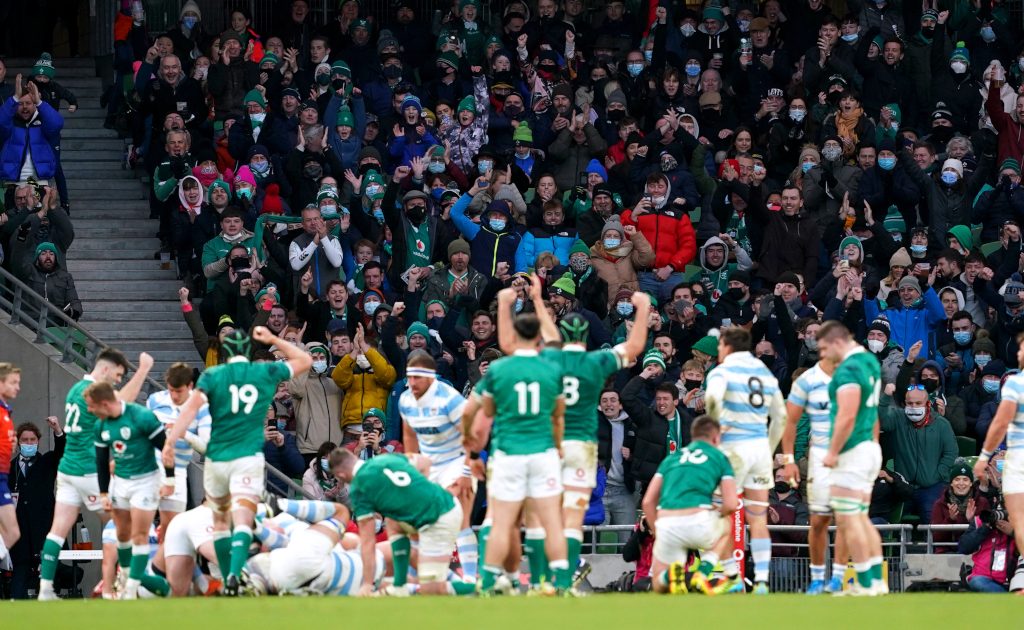 Ireland number eight Jack Conan believes that it is vital they have capacity crowds during the upcoming Six Nations.

Due to the spread of the Omicron coronavirus variant, attendances at sports events are currently limited to 5,000.

However, the government are meeting to discuss whether they can ease restrictions due to the decline in cases in the country.

That means Andy Farrell’s men could well be cheered on by a full house in their games against Wales, Italy and Scotland.

Why you play rugby

“Yeah, I think it absolutely matters,” Leinster back-row Conan told reporters. “It’s one of the best things about playing rugby, to have the support of friends and family there.

“They can come to the RDS and they can see you play, and you can win in front of them. It means the world and it’s one of the reasons why everyone plays rugby, really.

“Please God we’ll be able to get people back to the RDS and back to the Aviva in the coming weeks.

“Obviously other countries have made that decision already and it would be great to play away and have people in stadiums.

“Hopefully we can follow suit and have as many people there because that extra volume, that extra noise, the atmosphere, it just makes those days extra special.”

Conan is looking to find some form and match fitness ahead of the Six Nations after a disrupted period following the end of the Autumn Nations Series.

Prior to the Montpellier match, the number eight had not played since the victory over the All Blacks due to injury and a series of Covid issues which has forced several cancellations.

“Everyone was a bit anxious that it was such an abnormal stage of the year where there’s no games when normally it’s such a busy period,” Conan said.

“Even last week you heard that Montpellier had cases and you’re thinking, ‘Ah God, is this going to be another game called off at the last minute’.

“There was definitely that anxiety about the place. Lads were nervous, everyone wanted to get back.

“Everyone loves training but you want to be out there playing and rugby careers are short. So when you’re missing two months of games it’s a lot.

“I wasn’t anxious on a personal level. I think there was anxiety in the building, everyone wanted to get back playing games, get back to winning in Europe and being in the blue of Leinster.

“It was completely out of our control so all we could do was make sure that we were fully prepped and ready to go.

“Even the other week when we were supposed to play Ulster, there was chat that if that was cancelled someone else might jump in instead of them.

“It was making sure that we were ready to go at a moment’s notice and lads showed at the weekend how eager they were to get back to it.”