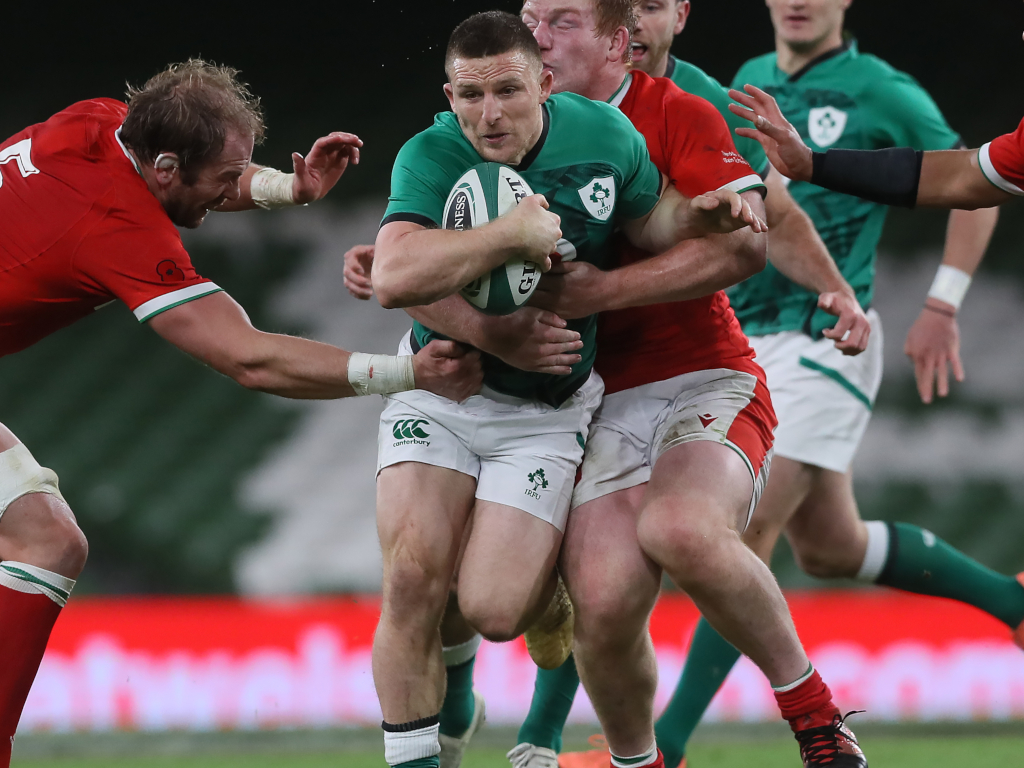 Ireland began their Autumn Nations Cup campaign in ideal fashion as they defeated Wales 32-9 to increase the pressure on Wayne Pivac.

Wales’ tale of woe under head coach Pivac continued at the Aviva Stadium, with Ireland claiming a fourth successive win against them, despite losing captain Johnny Sexton to a suspected hamstring injury.

Sexton’s replacement Billy Burns also went off in the second period, which will give head coach Andy Farrell potential cause for concern ahead of next weekend’s Twickenham appointment with England.

Leigh Halfpenny slotted three penalties for Wales, but they slumped to their longest losing run for eight years, with the only wins from eight starts since Pivac succeeded Warren Gatland a year ago being against Italy and the Barbarians.

Despite Pivac fielding 14 of the starting line-up on duty against Six Nations conquerors Scotland a fortnight ago, his players did not threaten to make amends for that dismal display.

A week that started with defence coach Byron Hayward departing his job ended in Wales finishing second-best, and leaving Pivac with plenty to ponder.

Ireland suffered a double blow ahead of the game when full-back Jacob Stockdale and lock Iain Henderson were ruled out.

Stockdale was sidelined by a calf muscle problem and the Irish Rugby Football Union said Henderson had a medical issue. Andrew Conway was called up on the wing, Hugo Keenan moved to full-back and Roux replaced Henderson.

Wales, meanwhile, welcomed back flanker Justin Tipuric after he missed the Scotland clash because of tonsillitis.

Tempers frayed twice during the first five minutes as Wales skipper Alun Wyn Jones and Ireland flanker Peter O’Mahony got to grips with each other, before Lowe was involved in a fracas alongside visiting wings Liam Williams and Josh Adams.

Referee Mathieu Raynal issued a general warning to Jones and opposite number Sexton, before the latter opened the scoring by kicking a penalty on his 100th appearance for Ireland and the British and Irish Lions.

Wales showed far more urgency than against Scotland, and they drew level after 17 minutes when Halfpenny kicked a short-range penalty.

Ireland sacrificed a kickable penalty for an attacking scrum early in the second quarter, and it paid dividends as sustained forward pressure ended with Roux diving over to claim the game’s opening try.

Have you seen a bigger grin before? 😁

But the Ireland skipper’s night ended when he limped off, meaning a Test debut for Ulster’s Bath-born number 10 Burns as Halfpenny’s 40-metre penalty made it 13-6.

Burns opened his points account five minutes before the break with a penalty as poor Wales discipline again let them down.

The visitors infringed at regular intervals, and Pivac hauled off prop Rhys Carre – he was replaced by Wyn Jones – as Ireland looked to increase their lead.

Halfpenny sent a 50-metre penalty just short of the target, but he made amends shortly afterwards, cutting Wales’ deficit to seven points.

Burns then landed a second penalty, and Ireland were 10 points ahead again approaching the hour mark.

Burns was then forced out of the action, with Murray going on and slotting a penalty after taking over kicking duties, before another penalty nine minutes from time sealed the deal ahead of Lowe’s 80th-minute touchdown – converted by Murray.