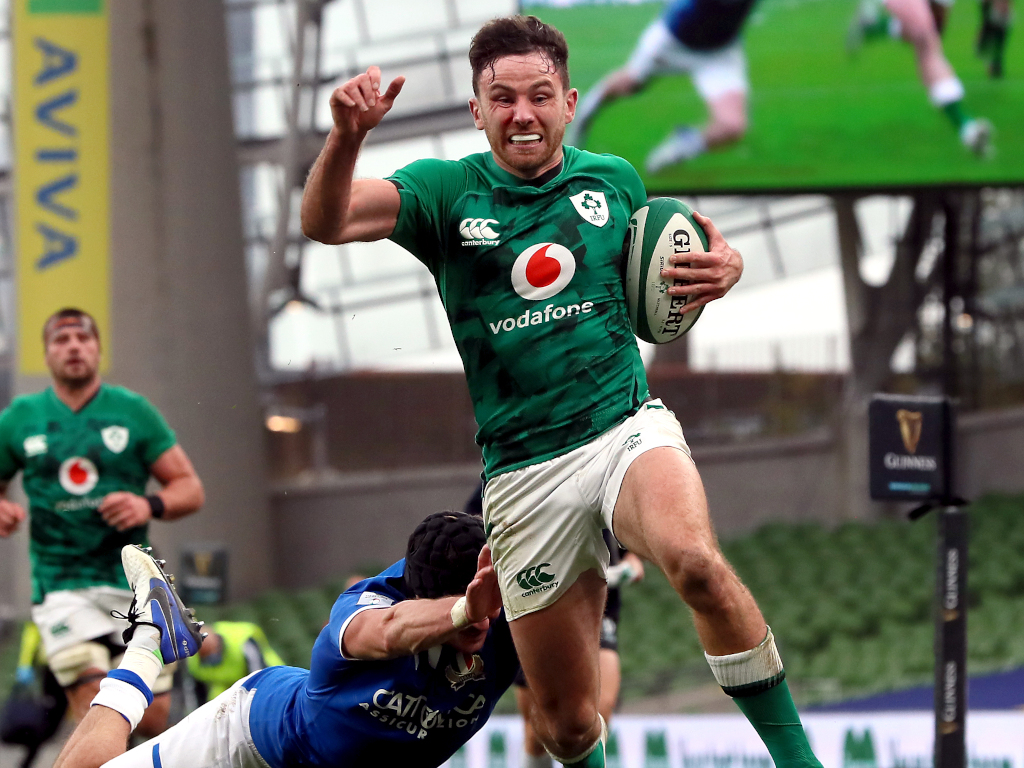 Ireland breezed past callow Italy 50-17 to tee up a tilt at a fourth Six Nations crown in seven years in a one-sided game in Dublin on Saturday.

Hugo Keenan bagged a debut brace, with fellow newcomer Will Connors also on the scoresheet.

CJ Stander, Johnny Sexton, Bundee Aki and Dave Heffernan all crossed too, with Edoardo Padovani and Paolo Garbisi finishing for the Italians.

Garry Ringrose suffered a head injury scare in one of the few blows to Ireland’s straightforward afternoon at an Aviva Stadium empty of fans due to coronavirus restrictions.

Ireland’s facile win leaves Andy Farrell’s side requiring another bonus-point victory against France in Paris next weekend to seal yet another Six Nations crown.

Ireland claimed Six Nations glory in 2014, 2015 and 2018 under Joe Schmidt, with the final tournament win comprising just their third ever Grand Slam.

But now new boss Farrell has the chance to steer Ireland to another Six Nations triumph at his first crack.

Putting four tries past France in Paris will prove an altogether different challenge from vanquishing the also-rans of Italy, however.

The Azzurri’s record Six Nations losing streak was extended to 26 with precious little issue, and with Ireland hardly having to hit full stride.

Italy stunned Farrell’s men from the off, Seb Negri haring through a gap in the hosts’ defensive line for a major break.

Scrum-half Marcello Violi latched on to Negri’s pass and so nearly opened the try-scoring, only to be hauled back.

Murray killed the ball and duly walked for a yellow card, and Garbisi slotted the penalty to put the Azzurri 3-0 ahead.

Unfazed Ireland shook off their numerical disadvantage however, with centre Ringrose starring in a fine scrum-half cameo.

The Irish quickly vindicated punting a penalty to the corner, with Stander barrelling home for the game’s first try. Sexton converted and shortly added a penalty after Ireland squeezed Italy at the scrum.

Ireland bungled a maul in Italy’s 22, then lost Ringrose after the centre took a heavy whack to his jaw.

Robbie Henshaw joined the fray and quickly sent Keenan in at the corner for his maiden Test score, floating out a fine pass to the Leinster flyer.

Sexton’s inch-perfect touchline conversion had Ireland 17-3 up and coasting on the half-hour.

Keenan hared home again just three minutes later, only for the try to be chalked off.

James Ryan was harshly judged to have blocked Marco Lazzaroni, creating the space for a rangy Stockdale break. So despite Keenan’s neat finish, the try was ruled out following a video review.

Caelan Doris robbed Italy on the deck in Ireland’s 22 before feeding Aki on the break. The centre set Murray racing away and the astute half-back picked the perfect moment to turn the defence with a cute grubber.

Keenan beat the cover to the loose ball, gathered cleanly and scored, before Sexton’s conversion extended Ireland’s interval lead to 24-3.

Italy cut through a dreary second-half opening as Padovani punished Sexton’s telegraphed wide pass to intercept and race in unopposed.

Garbisi’s conversion left Ireland leading 24-10 ahead of the hour and still hunting the all-important bonus-point score.

The hosts hit back quickly, however, with Connors capping a well-worked lineout drive for his debut score and that vital fourth try. Sexton’s conversion made it 31-10.

That broke the Italy resistance and Sexton quickly capped a fluent counter-attack to bag himself a score, after Stockdale, Stander, Keenan and Doris had all cut through the visiting defence.

Ross Byrne’s quick conversion let the match restart one final time – but that backfired as Italy scrapped a second score of their own, Garbisi racing in after a smart dummy before converting his own score.