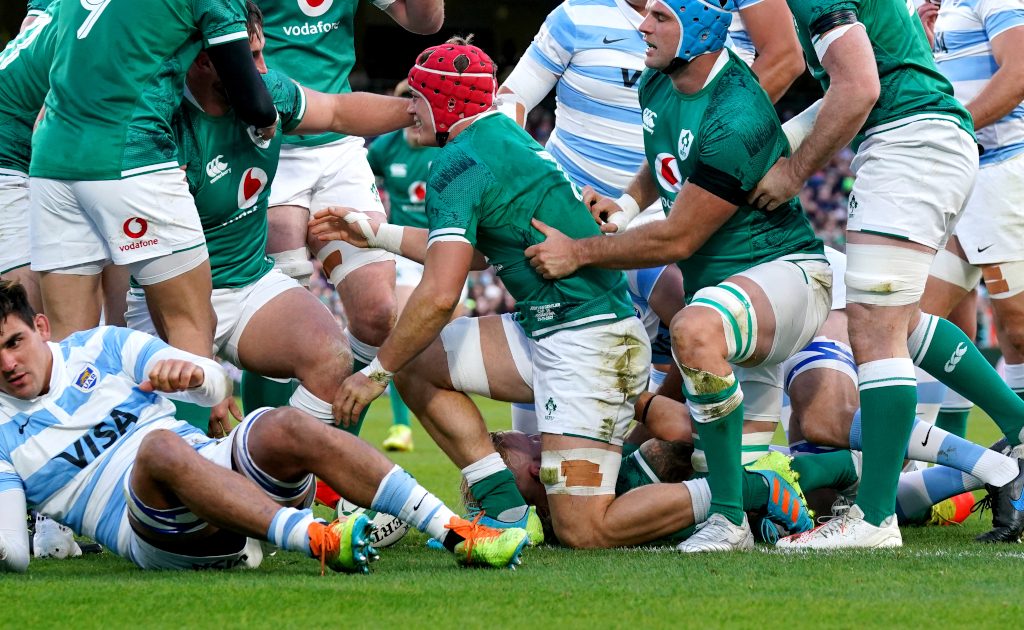 Seven tries from Ireland’s forward pack helped them to an impressive 53-7 win over Argentina in their Autumn Nations Series clash in Dublin.

Back-row Josh van der Flier scored twice as the Irish wrapped up a fruitful end-of-year campaign in style at the Aviva Stadium.

Los Pumas have history of upsetting Ireland following three shock wins at World Cups but faded fast from a promising start as their record of never having won at the Aviva Stadium continued.

Mateo Carreras’ early try was all Mario Ledesma’s men had to show from a difficult afternoon, while lock Tomas Lavanini was dismissed 20 minutes from time for a dangerous challenge on Irish replacement Ryan Baird.

The visitors’ hopes of avoiding a 14th defeat of a difficult calendar year were not helped by a bizarre spell of first-half profligacy during which Emiliano Boffelli somehow squandered two simple penalties and Carreras was denied a second score by an unexpected fumble.

But, having already lost Sexton and Jamison Gibson-Park to injury, he eventually made six changes from the 29-20 win over the All Blacks as forwards Jack Conan and Iain Henderson pulled out ahead of kick-off to be replaced by Peter O’Mahony and Beirne.

The late disruption perhaps contributed to the hosts’ disjointed start which saw Argentina race ahead inside three minutes.

Winger James Lowe found himself overloaded on Ireland’s left and Carreras duly took advantage, cutting inside Beirne and the recalled Conor Murray to dive over, with Boffelli slotting the extras.

The lead did not last as Carbery kicked a penalty before converting after Van der Flier powered over from a rolling maul on the left.

Prop Porter then stretched the advantage by bulldozing over to claim only his second international try on the occasion of his 40th cap following sustained pressure.

The relatively swift turnaround on the scoreboard could not mask the hosts’ struggles to emulate the eye-catching displays against Japan and the Kiwis during the past fortnight.

This was, for large parts, a far scrappier affair, with the crowd considerably more subdued.

And Ireland were fortunate not to fall behind during a strange eight-minute period.

Pumas full-back Boffelli twice brought gasps from the stands as he contrived to miss quick-fire kicks from in front of the posts, while Carreras compounded the misery when he fumbled the ball with the try-line in sight before going off injured.

Doris, shifted to number eight due to Conan’s late withdrawal, ensured daylight between the teams at the break by scoring for the second successive week, with Carbery maintaining his flawless kicking record.

Having lost stand-in skipper James Ryan to a head knock just before the interval, Ireland began to assert authority after the restart.

A deliberate knock-on resulted in a yellow card for Argentina back-rower Pablo Matera, with Carbery adding the resultant penalty and then converting after Van der Flier’s second score was awarded following consultation with the television match official.

Argentina’s uphill task became that bit harder on the hour mark when lock Lavanini forcefully ploughed into Baird and was deservedly shown a red card.

From then on, it was largely one-way traffic and Ireland capitalised to add gloss to the final score.

Leinster youngster Sheehan broke off a maul to claim his maiden Test try, before experienced substitute Healy made up for the disappointment of seeing an early effort chalked off by touching down.

Argentina did threaten a late consolation but Ireland’s dogged defence impressively dug in as their fine form continued with the 2022 Six Nations on the horizon.