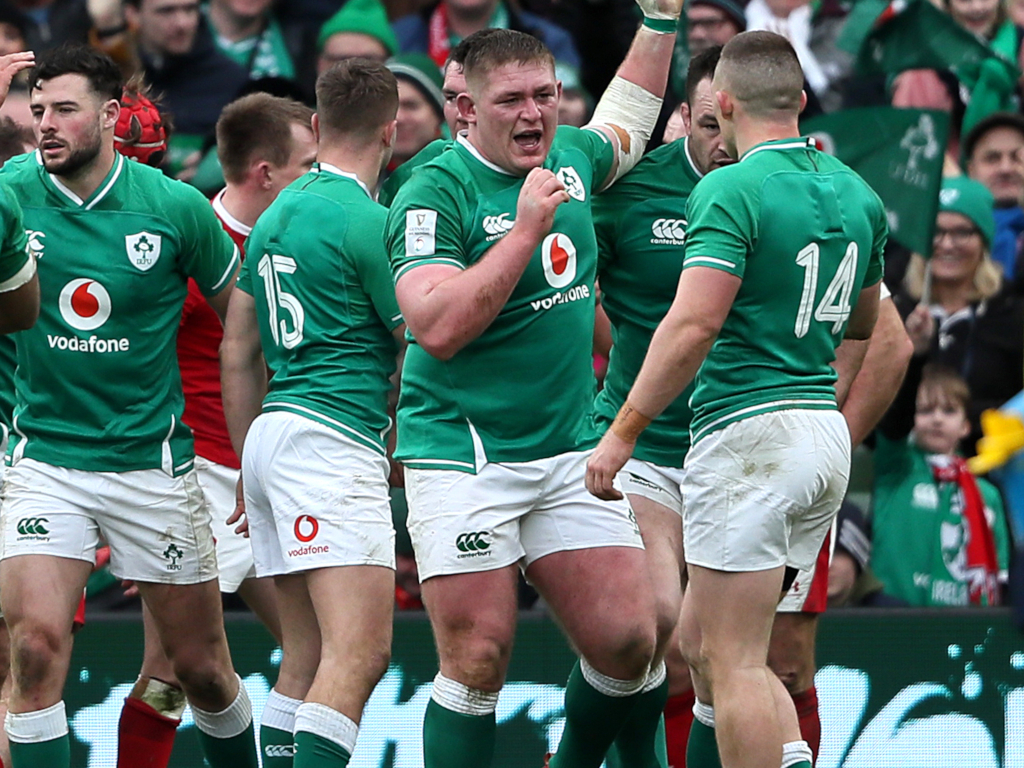 Ireland secured their second successive win in this year’s Six Nations Championship following a thoroughly deserved 24-14 triumph over Wales in Dublin on Saturday.

After struggling against Scotland in their opening match of the tournament, they were much improved in Round Two, securing a bonus-point via scores from Jordan Larmour, Tadhg Furlong, Josh van der Flier and Andrew Conway.

It was Wales’ first Six Nations defeat since Ireland beat them two years ago, while they have not won in the tournament on Irish soil for eight years.

Andy Farrell’s team remain on course for a Grand Slam, but Wales’ hopes of a clean sweep are over, and they could have few complaints.

Hint of a forward pass but Wales won't mind#ITVRugby pic.twitter.com/ItGZobUSY9

There was no doubting Ireland’s supremacy as they improved considerably on last weekend’s performance in beating Scotland.

Wales, though, have plenty of questions to answer during the build-up to their next game against a resurgent French team in Cardiff following Wayne Pivac’s first defeat as head coach.

Ireland showed two changes from the side that beat Scotland, with centre Robbie Henshaw replacing an injured Garry Ringrose and flanker Peter O’Mahony also starting in a reshaped back-row that saw CJ Stander move to number eight instead of Caelan Doris.

Saracens centre Nick Tompkins, a try-scoring debutant off the bench in Wales’ victory over Italy seven days ago, made his first Test start and George North moved back to the wing from midfield.

Wales were under immediate pressure after Ireland wing Jacob Stockdale’s kick left them retreating, but a strong early scrum reaped a penalty that was cleared to touch.

The Wales forwards enjoyed early supremacy, proving technically efficient, and Ireland did not gain their first penalty until the 13th minute as both sides went about their business like two sparring boxers.

Ireland had more than a fair share of territorial control, yet just as a tight opening quarter appeared to be moving towards a scoreless conclusion, the home side struck.

They initially kept possession tight in the forwards, and when it was eventually moved wide, Larmour finished impressively after brushing off a Tompkins challenge.

Sexton made a hash of the conversion attempt, but Ireland were off and running, leading 5-0 after finding their feet in what was proving an attritional encounter.

Wales suffered a major blow 15 minutes before the interval when wing Josh Adams, who had scored 10 tries in his last eight Tests, limped off to be replaced by Johnny McNicholl.

It came just at a time when Wales needed to find an attacking spark, but their response was impressive as Biggar darted inside and outside of Irish defenders before sending a scoring pass to Williams.

Biggar’s conversion made it 7-5, but Williams went from hero to villain just five minutes later.

Wales skipper Alun Wyn Jones won lineout ball deep inside his own 22, throwing the ball to Williams, but he dropped it and Ireland gained an attacking scrum from which they scored when Furlong crashed over.

Sexton converted to restore a five-point advantage, before Ireland closed out the half and trooped off holding a 12-7 lead.

Wales could not get going early in the second period, and Ireland hit them with a third try after 47 minutes when Van der Flier claimed a close-range touchdown that Sexton converted.

Wales thought they had cut the deficit 10 minutes later after Hadleigh Parkes went over, but video replays showed he lost control of the ball as he attempted a one-handed touchdown under pressure, and Ireland escaped.

It was a key scoreboard moment, and Wales did not gain another opportunity until Tipuric stretched over in the dying seconds as Ireland comfortably closed out the contest with Conway’s 76th-minute try, and they will now march confidently on to Twickenham.

Good quality passing as Ireland lets the ball do all the work and Conway finishes Wales off#ITVRugby pic.twitter.com/iQtHgzn3Xw