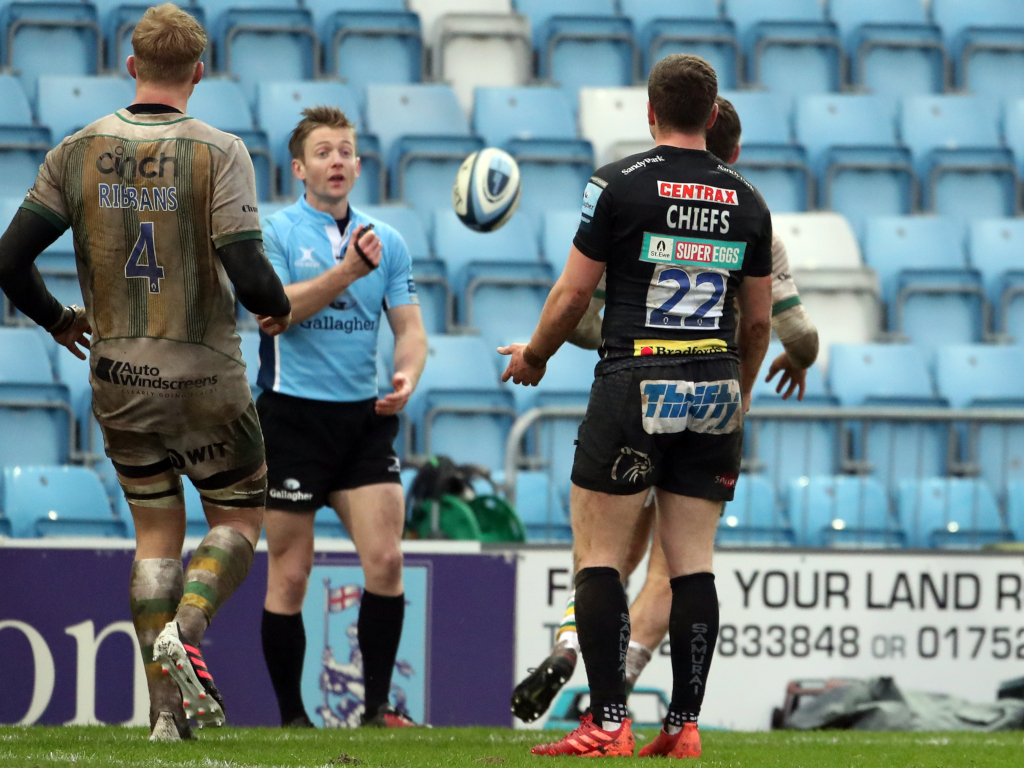 Exeter boss Rob Baxter had no complaints about a dramatic finale at Sandy Park after his Premiership champions were beaten 13-12 by Northampton.

Chiefs lock Sam Skinner’s 80th-minute try meant that fly-half Joe Simmonds had a chance to snatch victory with the game’s final kick – a touchline conversion attempt into a gusting wind.

But Simmonds did not even put boot to ball as several Northampton players ran towards him in an attempt to charge down the kick, and he was suitably distracted, appearing non-plussed as Saints wing Ollie Sleightholme hacked the ball into touch.

Some Exeter players remonstrated with referee Christophe Ridley, but he had already blown the final whistle and Northampton could celebrate their first victory at Sandy Park since 2014.

It’s irrelevant to me

“As far as I can tell, I think ‘Simmo’ moved, they charged and that’s what you are allowed to do,” Exeter director of rugby Baxter said.

“Until I watch the video I don’t know, but in a lot of ways it is irrelevant to me. It is not the referee’s decision at the end which has decided that game.

“We’ve not taken our opportunities, which is a little bit uncharacteristic of us, and you have to give Northampton massive credit for how they fought on their try-line.

“We weren’t bang on. There are a few things we can look at. It was a tough game of rugby, Northampton played their part in it, and we have come up a shade short.

“Sometimes that’s the way of the rugby gods. He was up there thinking ‘I’m not sure Exeter deserve to win this’. Sometimes it works like that.”

Number eight Shaun Adendorff scored an early try for the visitors, which Piers Francis converted, but Exeter could only muster a Jack Yeandle touchdown in reply, converted by Harvey Skinner, until Sam Skinner struck at the death.

As Rob Baxter (very classily) admitted in the clubs post match interview straight after game, the wider angle of simmonds conversion shows he does take a small step towards the ball before stopping again pic.twitter.com/mYXQJtn7CX

“He (Simmonds) definitely moved,” Boyd said. “If he had kicked that goal, I think we would probably have been unlucky. Over the 80 minutes, I think we did enough to probably deserve the victory.

“When we have come here in the past when Exeter have got five metres from the line, they have usually scored fairly easily against us.

“Today, I thought our goal-line defence and our set-piece work, particularly the scrum, was pretty decent. The difference for us was that we fronted up physically close to the line in terms of defence.

“Ten per cent of that (goal-line) defence is technical, and 90 per cent is desire. We made some little technical adjustments, but we talked about the fact we needed to stand up, and we did.

“We will take pleasure from the fact that we came here and fronted up. It is the first time since 2014 that we’ve won here. The end might have been controversial, but I would have been disappointed to have lost.

“It was a gutsy and gritty performance, so to grind out a win with a gutsy performance is pleasing.”