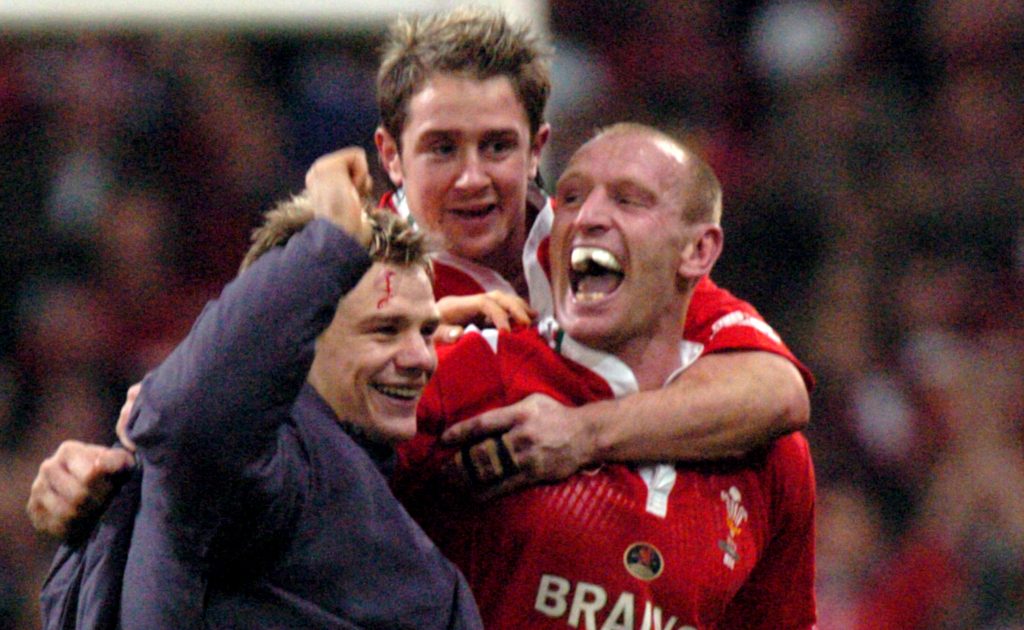 Wales legend Gareth Thomas says he couldn’t have gone through his battle with HIV and raising awareness of the disease if fellow great Shane Williams hadn’t have been by his side.

Thomas told Williams about his diagnosis on the BBC show ‘HIV and Me’, which was broadcast in 2019, and Wales’ record try-scorer has since supported the 100-times capped international through thick and thin.

Fast forward through two years and the Covid pandemic, and Thomas and Williams are still side by side – raising awareness of HIV and breaking down stigmas.

Former Wales full-back Thomas came out in 2009 then revealed he was living with HIV a decade later.

The 47-year-old has now elaborated on Williams’ vital support and how that can act as a guide for anyone wanting to show solidarity to those in discriminated communities.

“I couldn’t be where I am today without the support of others. I didn’t do this on my own.

“When I sat down with Shane and told him I was living with HIV it was live on camera. I tried for weeks and weeks previously to get Shane to let me tell him what I was going to tell him.

“Because I didn’t want Shane’s reaction not to represent who he is as a man. And I understood there could have been a moment that captured an awkward look on Shane’s face.

“Because, trust me, many people I’ve told had an awkward or fearful look.

“But there was nothing like that from Shane. And for people like him to show that support to me, that gave me the strength then to go on and tell somebody else.

“And then that person’s reaction would give me the strength to tell someone else, and so on.

“Every amount of support I got gave me an element of strength to go on and tell somebody else. I am only who I am because of the people around me.

“I heard somebody who I respect in Shane Williams say you didn’t need to go through what you were going through alone.

“So if Shane can do that, maybe someone else’s brother, mother, sister, or whoever can do it too, so maybe that can help someone else tell their story to friends and loved ones as well.”

Thomas and Williams ran the Royal Parks Half Marathon in London on Sunday, as part of the Tackle HIV initiative that partners with the Terrence Higgins Trust.

Flying wing Williams scored 58 tries in 87 Wales Tests, also winning four caps for the Lions in his own glittering career spanning 2000 to 2011.

The old friends continue to push the message that treatment means HIV is no impediment to life, as underscored by Thomas’ half-marathon time of one hour and 41 minutes on Sunday.

As Williams reflects on a pivotal few years for Thomas, he expressed his great pride in his friend’s candour and strength.

“It must have been really difficult for him, and I know it was,” Williams told PA. “He had loved ones and people and family members that he had to tell first of all.

“He said it was a long time before he could actually confide in anyone, because it was scary for him.

“He didn’t know how the public were going to perceive him.

I’m 47, I just run #RoyalParksHalfMarathon in 1hour 41 minutes. I’m happy, I’m smiling, I’m showing that living with H.I.V. Is no limiting me in any way. I’m so proud to not just talk, but to be!! @TackleHIV @THTorguk pic.twitter.com/sZzaomQyso

“But as soon as he did say something, he felt 100 times better, so much weight was lifted off the shoulders and that kind of stress had been relieved.

“And the public reaction has been just the same as from his family and friends. The public loves Gareth for Gareth, and that’s important.

“I am very proud of him as his friend; out of captaining your country and playing for Wales 100 times, that was probably far easier than coming out as gay and coming out as having contracted HIV.

“But he’s done all those things and the manner in which he has just shows what a strong character he is.

“I think his experience hopefully provides a good platform for others to follow in future. As a captain in rugby he led from the front and I feel like he’s just done that all over again.

“I know people have used him as an inspiration to change their lives, and that’s only going to continue.”