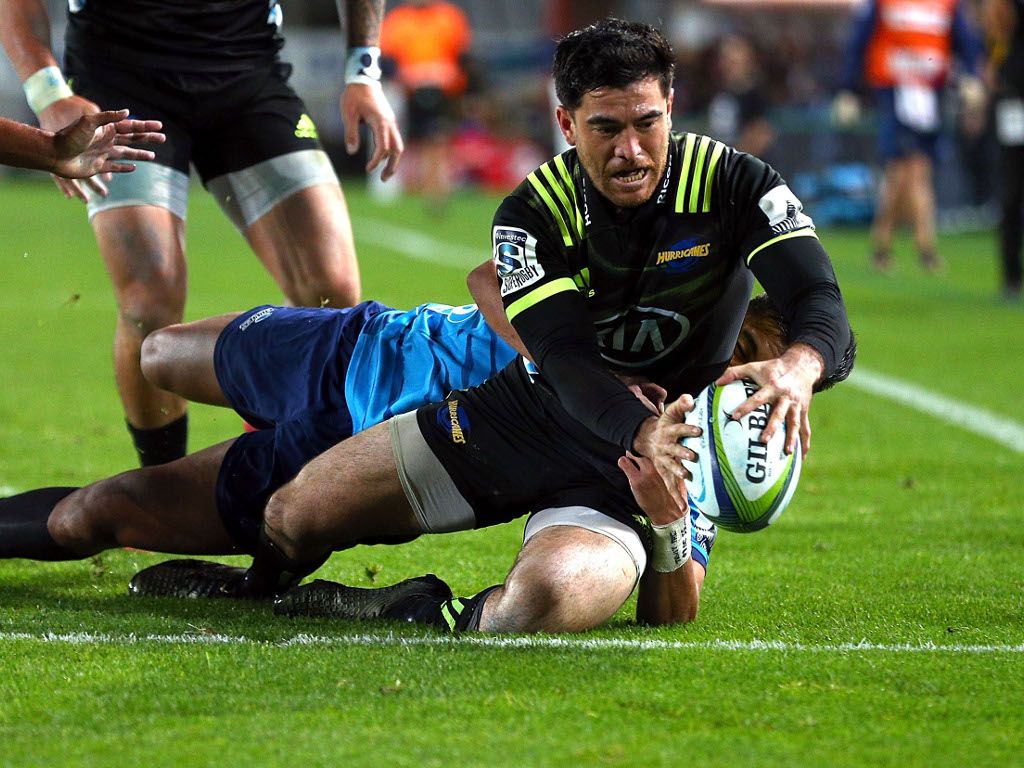 The Hurricanes got the job done but were made to work hard for their 36-15 bonus-point victory over the Blues at Eden Park on Friday.

In a fast-paced and exciting derby, both sides gave the ball plenty of air but the Hurricanes eventually got the rub of the green as they outscored their hosts five tries to two, while Beauden Barrett finished with an 11-point haul courtesy of four conversions and a penalty.

The result means the Hurricanes provisionally move to the top of the New Zealand Conference and overall table but that situation could change if the Crusaders beat the Waratahs in Christchurch on Saturday. The Blues, meanwhile, are still bringing up the rear in their country’s conference.

The Hurricanes showed their intentions from the outset when they kicked for touch, after being a awarded a scrum penalty, in the sixth minute. And from the ensuing line-out, they launched a drive and were rewarded when Ricky Riccitelli barged over for the opening try.

Fly-half Barrett added the extras before Stephen Perofeta narrowed the gap in the 15th minute courtesy of a penalty after Brad Shields was blown up for offside play on defence.

The next 10 minutes was an arm wrestle as both sides tried to gain the ascendancy and the Blues did just that thanks to a moment of magic from Sonny Bill Williams. The All Black ran onto an inside pass from Perofeta inside the Hurricanes’ 22 and beat a couple of defenders before throwing a perfectly weighted pass to Orbyn Leger, who cantered in for his side’s opening try.

Perofeta failed with the conversion attempt and that proved costly as the Hurricanes were soon camped inside the home side’s 22 again. And in the 32nd minute, the visitors regained the lead when Gareth Evans caught the defence napping when he played quickly from a penalty close to the Blues try-line before crossing the whitewash.

The Hurricanes continued to hold the upper-hand during the latter stages of the half but could not convert their dominance into points and the teams changed sides at half-time with the visitors holding a 14-8 lead.

The Blues were fastest out of the blocks after the restart and they reaped reward when Ofa Tuungafasi barged over from close quarters in the 49th minute with Perofeta’s conversion giving them a 15-14 lead.

The Hurricanes’ response followed shortly afterwards and, after a sustained period of pressure, deep inside the home side’s half, they regained the lead when, after taking the ball through seven phases, Ardie Savea offloaded to Nehe Milner-Skudder, who crossed in the left-hand corner with two defenders on his back.

The visitors continued to dominate and went further ahead when Sam Lousi crossed for their fourth try on the hour-mark after Evans was stopped short in the build-up.

The Hurricanes extended their lead in the 71st minute when Barrett slotted a penalty after Jerome Kaino strayed offside on defence.

And just before the full-time hooter, fly-half Barrett launched a crossfield kick which his brother Jordie knocked infield to flanker Savea, who threw an inside to Matt Proctor and he sealed the win and the bonus point when he crossed the whitewash.

The odds for the next game: sun bet promo code