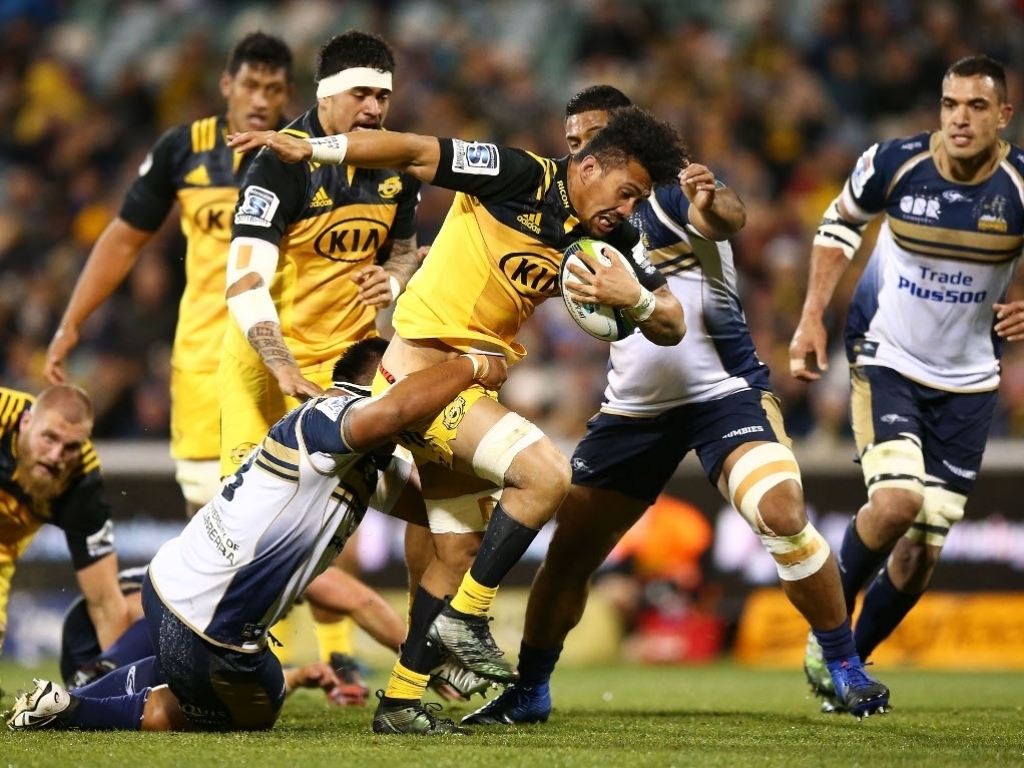 The Hurricanes became the first team to reach the Super Rugby semi-finals when they claimed a 35-16 win over the Brumbies in Canberra on Friday.

The Brumbies were competitive throughout although the Hurricanes gradually took control of proceedings and eventually outscored their hosts four tries to two with Jordie Barrett leading the way with a 20-point haul courtesy of a try, three penalties and three conversions.

The home side held a 16-15 lead at half-time thanks to tries from James Dargaville and Josh Mann-Rea but five-pointers from Wes Goosen and Jordie Barrett during that period kept the Hurricanes in the match.

The Brumbies had the upper hand during the early exchanges and were soon camped inside the Hurricanes' half. That early dominance reaped reward as early as the fifth minute when James Dargaville gathered a pass from Andrew Smith deep inside the visitors' 22 before crossing for the opening try.

It did not take long for the Hurricanes to respond though and they did it in style when Goosen collected a long throw-in at the back of a lineout on the edge of the Brumbies' 22 and stepped past three defenders before diving over.

Both those tries were not converted but the Brumbies regained the lead in the 12th minute courtesy of a penalty from Wharenui Hawera after the Hurricanes were blown up for illegal scrummaging.

And the hosts soon went further ahead when Josh Mann-Rea scored their second try from a lineout drive close to the Hurricanes' try-line.

With the score at 13-5, the home side had their tails up but the Hurricanes narrowed the gap in the 26th minute in bizarre fashion. This, when a pass from TJ Perenara, deep inside the hosts' 22, bounced off the head of Ben May. Jordie Barrett was quickest to react and dived on the loose ball behind the Brumbies' tryline.

Barrett converted his own try before trading penalties with Hawera which meant the game was evenly poised as the half drew to a close.

Just before half-time, the Hurricanes were reduced to 14 men when Jeffery Toomaga-Allen was yellow carded for a shoulder charge to the head of Hawera.

The offence was similar to the one committed by Sonny Bill Williams on Anthony Watson during the All Blacks' recent series against the British and Irish Lions but referee Glen Jackson ruled that there was mitigation for Toomaga-Allen's indiscretion as Hawera was going down towards the ground after being tackled by another Hurricanes player.

But the Brumbies could not capitalise on their numerical advantage and it was the the visitors who scored the only points during Toomaga-Allen's 10 minute spell on the sidelines – Barrett slotting his second penalty in the 49th minute.

The next 15 minutes was a measured affair as both sides tried to gain the ascendancy although the Hurricanes pushed further ahead thanks to another penalty from Barrett in the 65th minute.

Five minutes later, Dane Coles showed his class and set off on a barnstorming run before offloading to Perenara who outpaced the cover defence before crossing for his side's third try.

And just before the end, Jordie Barrett intercepted a wayward pass from Robbie Abel inside the Brumbies' 22 and got a pass out to Goosen who crossed for his second try which sealed the win for the defending champions.