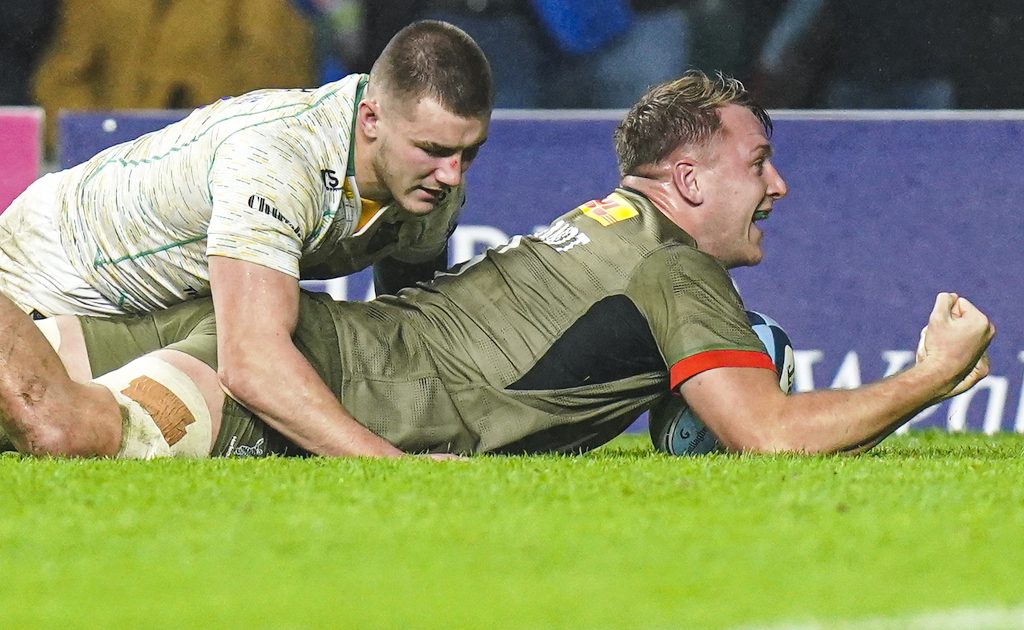 After excelling for Harlequins against Northampton Saints at Twickenham, Alex Dombrandt has targeted nailing down a spot in England’s back-row during 2022.

The number eight gave his chances of starting the Six Nations opener against Scotland on February 5 a shot in the arm by scoring a hat-trick against Saints.

It was a superb showing in front of a packed home of English rugby and it will now be interesting to see if Eddie Jones gives him the starting shirt next year.

Four caps into his Test career and Dombrandt is pushing hard to be promoted from the bench after using last term’s league win with Quins as a springboard.

“It’s been a really good year and I’ve really enjoyed my rugby. To win the Premiership and to get my first England caps… I definitely look back on this year with fond memories,” the number eight said.

“For me it’s just about looking to improve. I really want to continue to push to get into England and be a staple there, not just a couple of caps and then disappear. I really want to try and kick on there and improve as a player.”

Quins climbed to third in the Premiership after overcoming Northampton in a high-quality match and Dombrandt sees their failure to hit top gear so far this season as a good omen.

Saints were dispatched despite incessant drizzle at Twickenham as the champions ran in six tries and Dombrandt rails against their reputation as a team that excels in dry conditions only.

“I think that’s a bit unfair. We actually showed against Northampton in the rain that we can throw the ball about and we can play our style of rugby in the wet,” he said.

“I actually don’t think the weather has that much to do with it. Obviously it’s easier to do our style of rugby when the sun is out and it’s dry, but we showed in difficult conditions that we can put our style of game on the table.”

Meanwhile, after Marcus Smith’s late Covid withdrawal, the worry for Harlequins was surely that their attacking game would lack a little zip.

Enter Will Edwards, who delivered an exceptional display to help his side to a 41-27 triumph over Northampton at Twickenham on Monday.

Head coach Tabai Matson was quick to praise the fly-half’s fine performance under difficult circumstances, saying that he was “exceptional”.