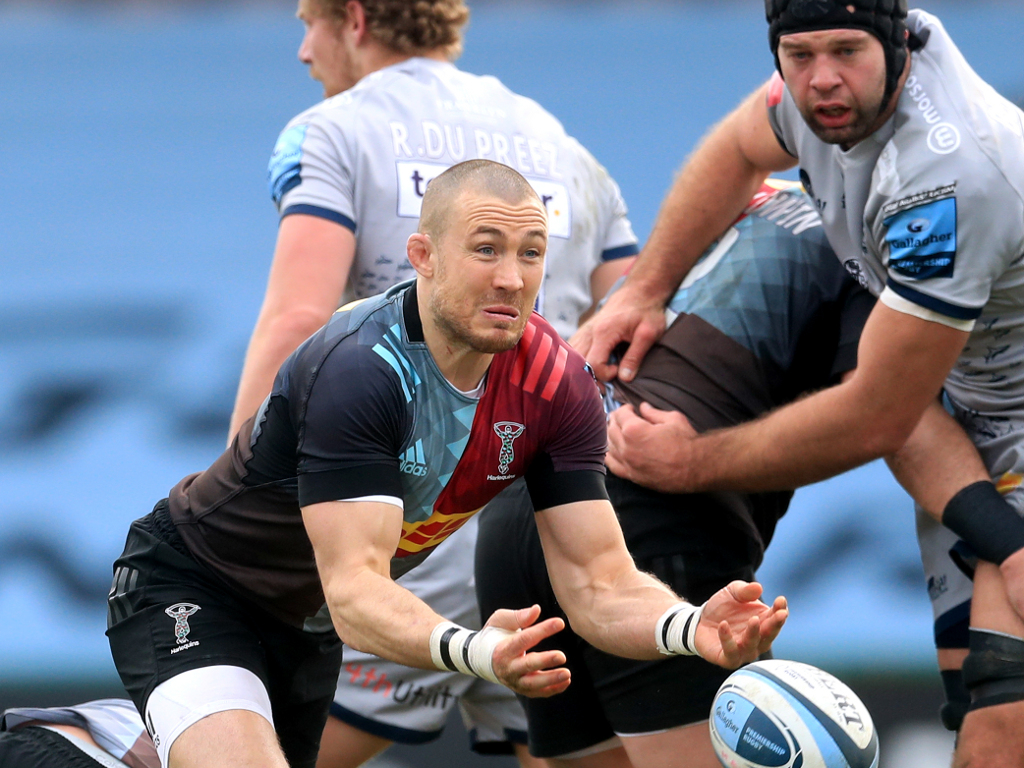 Harlequins’ resurgence following the departure of Paul Gustard produced its best result yet as Sale were dispatched 24-12 to claim third place in the Premiership.

Marcus Smith continued to show England what they are missing with a virtuoso display at fly-half, the highlight of which was the dynamic break that led to Alex Dombrandt’s try.

Smith also landed all three conversions, two of them of tries scored by the superb Joe Marchant, and kicked a penalty as Quins claimed their fourth consecutive victory since Gustard stepped down as head of rugby last month.

Sale have been added to recent victims Wasps, Bath and Leicester to continue the London club’s acceleration up the table with a win founded on defensive resilience as much as a ruthless approach to finishing.

Trailing 24-0, the Sharks faced a heavy defeat but fought back with tries by Curtis Langdon and Robert du Preez only to run out of steam.

For all the kicking in the opening quarter, the Round 10 clash had begun at a high tempo with the teams roared on by their noisy dugouts.

But for a kinder bounce of Smith’s crossfield kick wing Aaron Morris would have been over and shortly after Quins’ fly-half rescued his team when his own clearance was charged down by lock Matt Postlethwaite.

Sale were spending increasing time in the home half with one slick move down the right launched by Robert du Preez almost unpicking the defence.

As the Sharks’ grip continued to tighten, Quins struck against the run of play with two tries by Marchant in three minutes – both born out of turnovers won by openside Will Evans.

For the first, Evans robbed Sale on the floor to allow Dombrandt to rampage clear using a mixture of strength and footwork before Mike Brown joined the line to supply Marchant the scoring pass.

A loose Sharks lineout was the next to fall prey to Evans and when the ball was fed wide Morris chipped ahead for Marchant to grab his second, capitalising on a blunder by Marland Yarde.

Sale were stunned and Quins kept their foot on the throat when Smith danced through the midfield, accelerated into space and sent the supporting Dombrandt over.

And the visitors’ prospects continued to slide when Jean-Luc du Preez was shown a yellow card for a dangerous tackle on Dombrandt at the ruck.

Sale emerged for the second half with renewed fight and South Africa World Cup winner Lood de Jager present in the second-row following his three-month absence because of shoulder surgery, but they continued to bleed points as Smith landed a long-range penalty.

Feverish Quins defence kept Langdon out at the first attempt but they eventually cracked under sustained pressure with the replacement hooker successful this time.

For the first time home players fell off tackles as Raffi Quirke raced clear but Morris and Brown held the teenager up over the line.

From the ensuing five-metre scrum Robert du Preez used his strength to power over, but Quins cleverly played out the remaining minutes in opposition territory to halt the fightback.

It was Saints’ first win on Exeter soil for seven years, and they richly deserved to claim one of their most impressive triumphs under rugby director Chris Boyd.

But the game ended in dramatic fashion after Exeter lock Sam Skinner scored an 80th-minute try.

Joe Simmonds had a chance to win it with the resulting touchline conversion attempt, only for Northampton players to attempt a charge-down, and Simmonds was sufficiently distracted to not even make contact between boot and ball.

Exeter players complained to referee Christophe Ridley after he blew the final whistle, but it was to no avail, and Northampton celebrated.

Leicester recorded a convincing 27-8 victory over Wasps at Welford Road in a Premiership match that had three red cards.

The Tigers led 11-3 when their try-scorer Jasper Wiese was dismissed after 26 minutes but the hosts extended their advantage by another three points before Wasps prop Kieran Brookes saw red to even up the numbers.

Julian Montoya and Tommy Reffell crossed for further tries either side of Tom Cruse’s effort for Wasps before Leicester back-row Hanro Liebenberg was sent off with two minutes left.