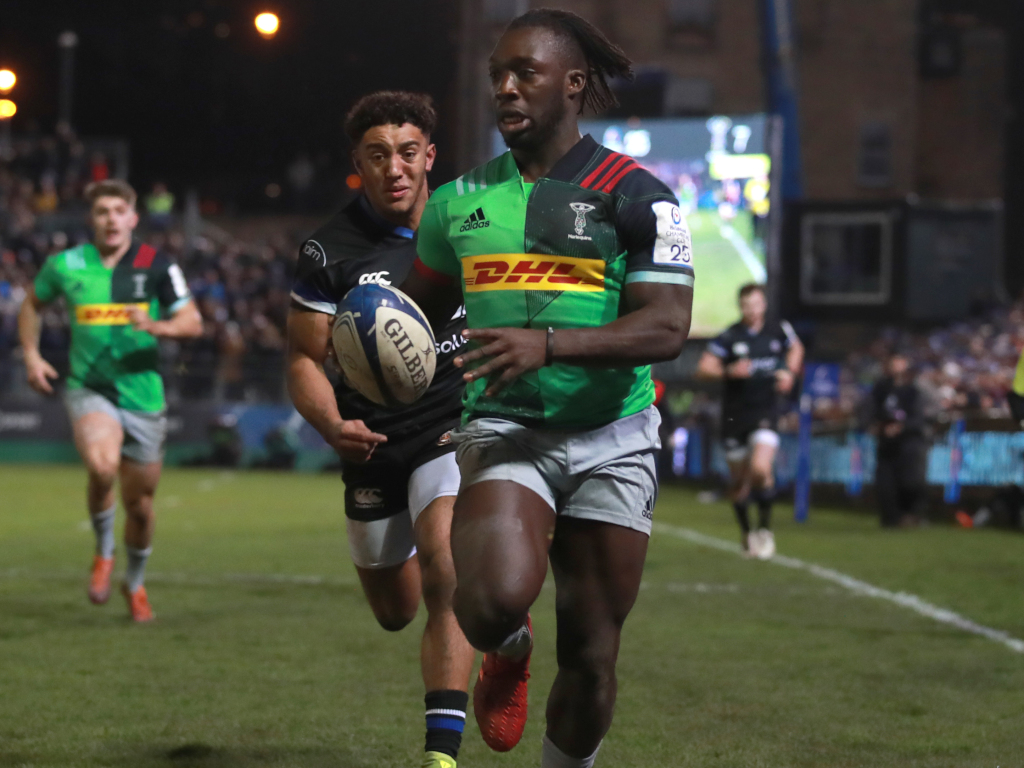 Harlequins overcame their recent poor form to seal their second victory of this season’s Champions Cup following a 25-19 triumph over Bath at the Rec.

The West Country club have never lost all their pool games in a European campaign, but a 16th season of European Cup rugby will officially be their worst if they are toppled by Ulster next Saturday and suffer a sixth successive defeat.

They – and potentially England – also suffered an injury scare when Anthony Watson limped out of the encounter.

Watson, one of England’s star performers at the World Cup in Japan, went off nursing a leg problem 11 minutes into the second-half.

The Bath full-back underlined his frustration in front of watching England head coach Eddie Jones by hurling his gum-shield to the ground before leaving the action.

England look like being without injured Exeter centre Henry Slade for the early Six Nations action, with the World Cup runners-up facing France in a Paris opener on February 2.

🎤 "The key thing for me is the resilience we showed. Especially in the last 5-10 minutes."

🎤 "We know last week was bad and we wanted to come here and step up."

Bath and Quins had already been eliminated from the quarter-final race, trailing way off a scorching pace set by Ulster and French heavyweights Clermont Auvergne.

And Quins emerged victorious at the Recreation Ground, guaranteeing that Bath will finish bottom of the group and confirming a miserable European campaign.

Watson captained a Bath team showing 14 changes from the side beaten by Premiership opponents Gloucester last weekend, with Jonathan Joseph, Sam Underhill and Taulupe Faletau among those rested.

Quins prop Kyle Sinckler gave England a pre-Six Nations boost, though, by proving his fitness to start after missing a 48-10 drubbing at Sale last time out, while front-row colleague Joe Marler made his 200th appearance for the London club.

Despite both teams already being eliminated, there was still enough on show to attract England boss Jones as he builds towards his Six Nations squad announcement later this month.

And he would have been impressed by Bath’s start, with early forward pressure being rewarded when Walker celebrated his new three-year contract in style by crashing over from close range for a try that Burns converted.

But Quins responded from their first attack, claiming a replica touchdown when Chisholm crossed following a lineout and Herron converted to make it 7-7.

Quins had the ascendancy, and they struck with a second try six minutes later, this time from the halfway line after full-back Aaron Morris sparked a slick attack.

His opportunism left the Bath defence searching for answers, and Ibitoye finished off a flowing move to put Quins five points clear.

Bath dominated the second quarter, and their pressure was eventually rewarded when Hamer-Webb collected Burns’ floated pass and crossed wide out.

Burns kicked the touchline conversion for a 14-12 interval advantage, while Quins lost skipper Chris Robshaw, who was injured trying to tackle Hamer-Webb, and Semi Kunatani replaced him.

A Herron penalty nudged Quins back in front, then Dombrandt sprinted clear to claim his team’s third try that Herron converted for an eight-point advantage.

It was a testing spell for Bath with Watson having gone off, but they regrouped impressively and Willison brought them back in touch through a 58th-minute try that cut Quins’ lead to 22-19.

Another Herron penalty put Quins six points clear, though, and there was no way back for Bath, despite a spell of late pressure.

In the other Friday game, La Rochelle overcame a 16-15 half-time deficit to secure a deserved 30-23 triumph over Sale Sharks. The English outfit were the better side in the opening period as Jean-Luc du Preez scored a try and AJ MacGinty and James Williams kicked 11 points off the tee.

Tevita Railevu and Tawera Kerr-Barlow responded with tries for the hosts before Geoffrey Doumayrou and Gregory Alldritt touched down in the second period to seal the win, despite Curtis Langdon’s late consolation.