Home Premiership Harlequins fight back to thrash Bristol at the Stoop 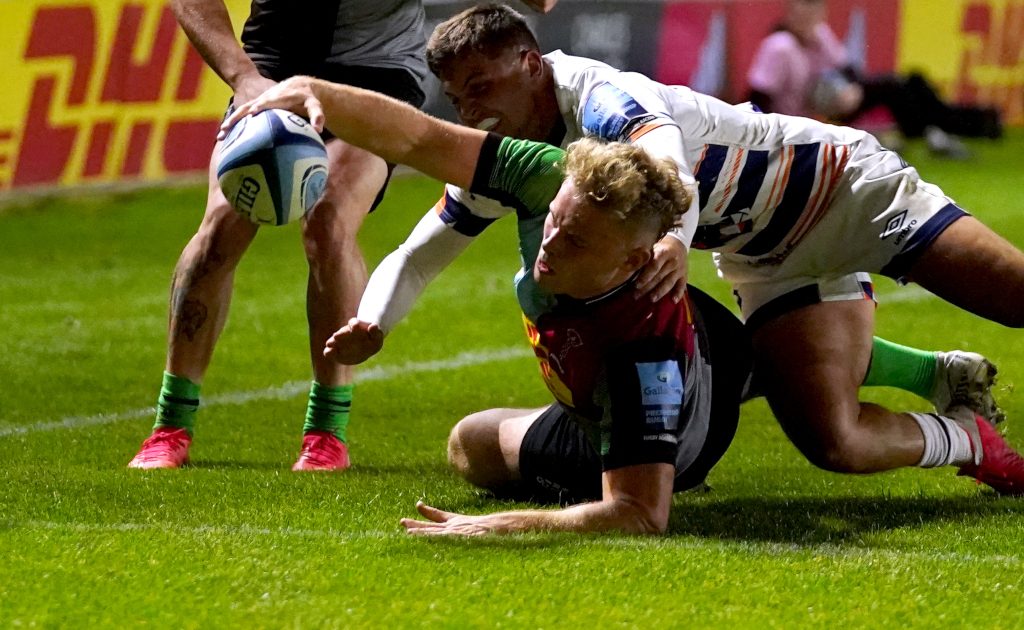 In almost a repeat of last season’s Premiership semi-final, Harlequins came from a big first half deficit to come back and secure an outstanding 52-24 Premiership victory over Bristol Bears.

The main difference here was that once Pat Lam’s Bears side went behind, they utterly capitulated to a rampant home team.

Despite a good start from Quins, Bristol held firm and then produced a 12-minute blitz which resulted in tries for Joe Joyce, Henry Purdy and Charles Piutau.

The Bears went into the break 24-7 ahead – Louis Lynagh responding for the hosts – but they were once again unable to build on that advantage.

Tabai Matson’s men duly increased the intensity, coming back into the contest through Lynagh and Andre Esterhuizen tries, before Luke Northmore, Will Collier, Tyrone Green, Marcus Smith and Alex Dombrandt went over for the defending champions to secure a third successive win this season.

It continues a worrying start to the season for the Bears, who have won just one of their four matches and must improve rapidly if they are to challenge for the title.

Quins debuted their new lights system to greet the players on to the pitch, but once the fireworks subsided it was Bristol who struck first when Joyce burrowed over from close range after Joe Marchant had produced a try-saving tackle on the line.

The Bears continued to attack with pace and width and when an out-the-back play created an overlap, Purdy instead used his footwork to dance through the home defence.

And in a repeat of last season’s semi-final, Bristol looked unstoppable as they poured through gaps and won collisions until Quins cracked for a third time with Piutau landing the final blow.

Smith came on for Allan and his first meaningful act was to send Esterhuizen into space, but while the South Africa centre was halted just short, a phase later Lynagh showed good hands to keep hold of the ball and touch down.

Callum Sheedy had nailed all three of Bristol’s conversions and he ended the first half by adding a penalty to extend the lead to 24-7, but seven minutes after the interval Quins pounced.

Smith used his footwork to make a half gap even bigger, releasing Lynagh, who worked the touchline with Esterhuizen before taking the return pass to touch down.

The comeback was on and Quins were now in full stride as a Green run that appeared to be going nowhere was given new legs by a scissors with Lynagh, and the move ended with Dombrandt sending Esterhuizen over.

Bristol were reeling as Smith burst into space and but for more composure at the key moment they would have been over again, but in the 56th minute the lead did change hands.

A scrum did the initial damage, but Danny Care pulled the trigger by directing a twisting Northmore over the line, with Smith converting to nudge Quins 31-24 ahead.

Bristol began to look like a rabble as they leaked a fifth try when replacement prop Collier scooped up turnover ball on the 22 and won the race to the whitewash.

And Quins showed no mercy with additional tries by Green, Smith and Dombrandt to send them galloping over the finishing line.