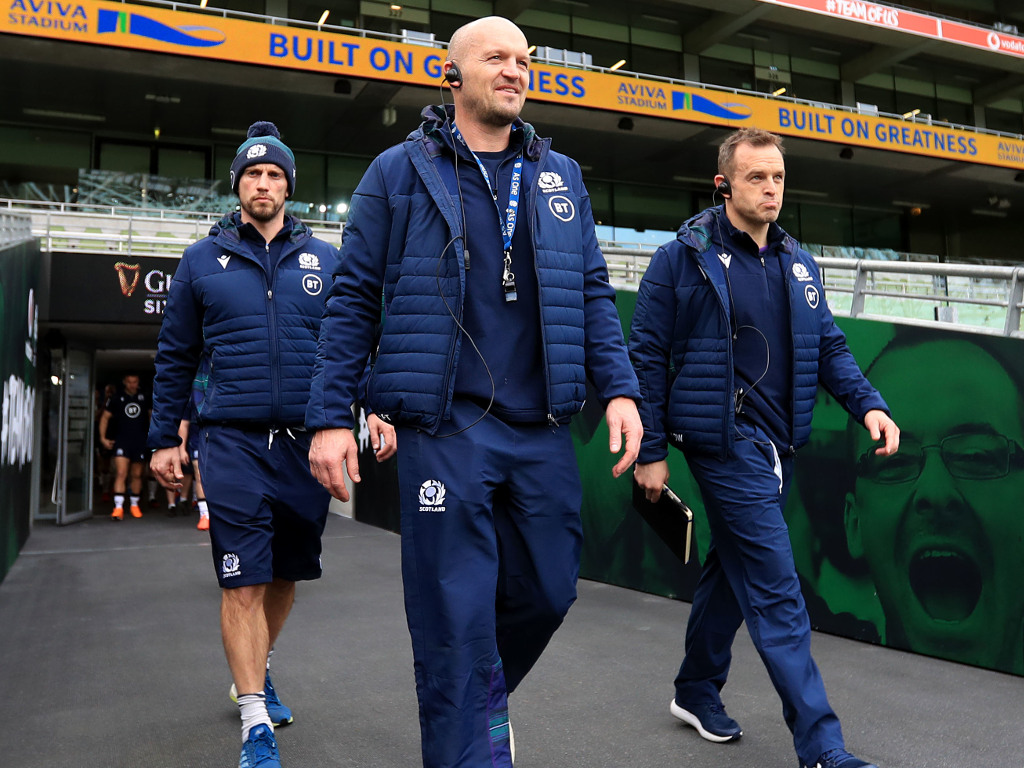 Scotland head coach Gregor Townsend has given a response on his position regarding fly-half Finn Russell’s comments in a national newspaper.

The Racing 92 playmaker spoke to the Sunday Times and revealed how he and boss Townsend “have clashed quite a lot” over the years.

Russell is absent from the squad after breaking team protocol and missed Scotland’s opening two matches, against Ireland and England.

His interview with the newspaper, however, has caused Townsend to respond via a statement released on Scottish Rugby’s official website.

“Following a newspaper article at the weekend I want to take the opportunity to address a few issues regarding Finn’s involvement with the squad,” said the head coach.

“We strive to create an environment for players to be at their absolute best when playing for Scotland. To do that players must be aligned to the high standards of being involved in team sport at an elite level.

“These standards are set out through feedback from players and staff and are driven by the player leadership group or the head coach at varying times during a campaign.

“We have players who come from around a dozen different clubs and it’s really important they commit to an agreed standard of behaviour, which builds trust and is at the bedrock of a high-performance environment.

“These standards don’t change for one player, even if that’s not what they experience in their club setting.”

Townsend continued: “A really pleasing aspect of the last three weeks has been seeing the group commit to this high-performance standard, bond as a group of young men and show consistency and quality on the training field. They’ve been a pleasure to work with.

“Following the World Cup, we reviewed a number of aspects of our environment and how that could lead to improved performances from the national team. This process involved taking lots of feedback from players, coaches, management and external input, on what we need to do better.

🗣️ "Hopefully whatever is going on, it can just get sorted and get him back in, fighting to play for this jersey." #GuinnessSixNations

“Changes start from what we do as a coaching group and I learned a lot from the experience in Japan to how I can coach the team better. How we run our week’s training to unlock the full potential in the squad is what drives us as coaches.

“We believe we are in a much better place following the tournament and review. We clearly didn’t perform on the field as well as we had planned and, off the field, felt certain standards of behaviour had slipped at times.

“Our team leaders made the decision there would be no drinking after our opening match of the Six Nations and they have been working closely with me on improving other aspects of our environment.

“I’ve loved working with Finn over the past seven years. In that time, I’ve coached him at Glasgow Warriors and with Scotland. He was one of my first signings in the academy at Glasgow. I had watched him train and play the previous season and thought there was a player of real potential.

“That season, training in our academy and playing for Ayr, we felt he had earned the opportunity to be part of the exclusive Macphail scholarship programme in New Zealand. That experience proved to be invaluable and he really kicked on the following season, making his mark for the Warriors then for Scotland.

“He’s been brilliant to coach at club and international level. He’s very coachable and I’ve worked with him in a very similar way throughout those seven years.

“Finn left camp on the Sunday night because of a disagreement over alcohol with fellow players and chose to miss the following day’s (Monday) training and meetings. I arranged to meet with him that evening. It was a really positive meeting where we talked openly about life, rugby and what it means to play for Scotland.

“I left that meeting, after almost three hours, really optimistic that Finn would play a major part in our environment and be a committed team member. Unfortunately, things have not unfolded as well as we would have hoped.

“To play for Scotland takes total commitment. A lot of people make great sacrifices for the opportunity to represent 150 years of history and be among a special group of people who have had the honour of representing their nation.

“A lot of times, everything is not always how you’d like it to be. You might not agree with everything that is there, maybe because it’s a different coach than the one you have at club level or a different way of preparing or playing. What is important is that you commit to the what has been agreed and put the best interests of the team first.

“In the Six Nations and this season we are playing teams in the top five or six in the world and the effort, planning and standards that go into preparing people physically and mentally are really important, as are the bonds that bring people together and the trust that must be created within the group.

“The door will be open to any player with the required level of ability – if they commit to being a trusted member of the team. It’s been made clear that Finn could be a part of that future. However, he stated at the weekend that everything else has to change for him to come back, rather than accept and adhere to the standards currently being lived by the group.

“I hope this situation can be resolved but our focus is on working with the squad and building on the positive work that’s gone in from the players for our first two games.”

In other news coming out of Scotland’s camp on Monday, second-row Jonny Gray is set to miss the remainder of the tournament.

Gray suffered a hand injury during the Calcutta Cup defeat by England on Saturday and the Scottish Rugby Union confirmed he would return to his club, Glasgow, for “ongoing care and assessment”.

The influential 25-year-old won his 57th cap during Scotland’s 13-6 defeat at Murrayfield.