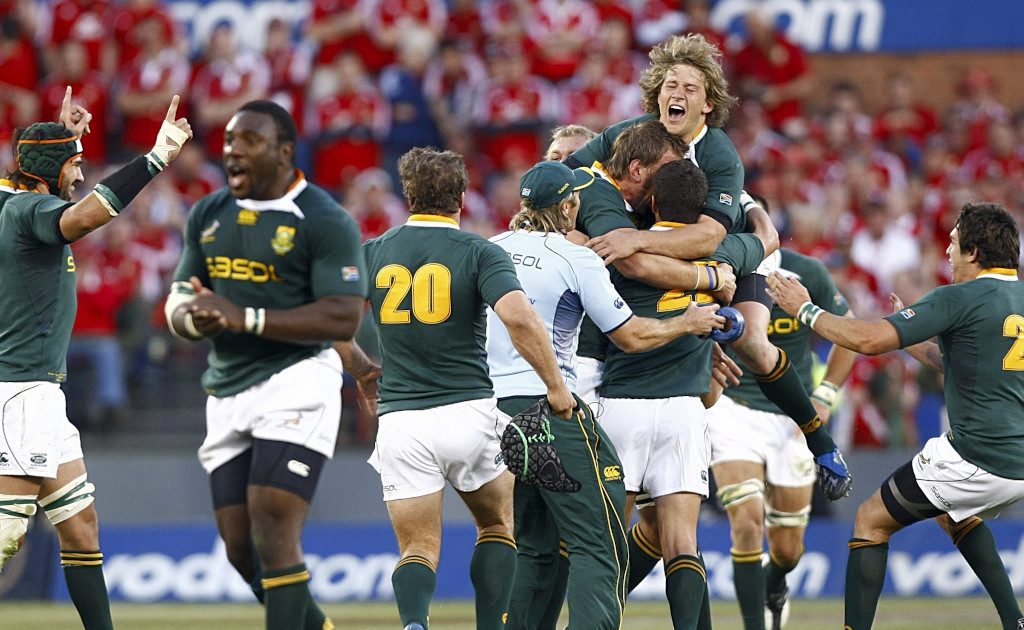 We take a look at the best ever Test teams to have graced the sport, with South Africa’s Class of 2007-2009 certainly in that bracket.

Despite being one of the international game’s traditional heavyweights, the Springboks came into the 2007 season after delivering some underwhelming performances in 2006 when they lost five out of 12 Tests played that year.

Things changed for the better in 2007 and apart from a triumphant World Cup run, in which they won all six their matches, they won seven out of their 10 other Tests played that year.

Despite the World Cup triumph in France, Jake White was replaced by Peter de Villiers at the start of 2008 and after starting off with a mediocre record – in which they won four and lost as many games from their first eight Tests – they went on a superb run, beating the British and Irish Lions 2-1 in a tightly-contested series before winning the Tri-Nations that year.

Although this Springbok team were not the most skilful side to take to the field during this period, like most successful Bok teams, they had a pragmatic yet effective game plan where they kicked for territory before placing plenty of pressure on their opponents with their strong defensive game. This usually led to mistakes from the opposition from which the Boks would score points and inevitably helped them to win matches.

That game plan was White’s brainchild and worked perfectly during the 2007 World Cup in France where the Boks won most of their matches comfortably before sealing a hard-fought 15-6 victory over England in the global showpiece’s final in Paris.

A key to success was a dominant pack of forwards which would lay a solid foundation from which their backline would usually score the bulk of the points, although the forwards would also benefit by crossing for some tries.

White was then replaced by De Villiers, who initially favoured a more expansive style of play but, after mixed results during the early stages of his first year in charge, he recalled several senior players and reverted to the team’s more familiar way of playing.

#FlashBackFriday to Hamilton, New Zealand in 2009… Creating some history!! Here’s wishing the @Springboks all the best tomorrow at the Cake Tin in Wellington!!!#MakeOpportunities pic.twitter.com/NM5SxAz2p9

Apart from their successful series against the Lions in 2009, the Boks went on to beat the All Blacks twice in South Africa before also beating them in New Zealand to win the Tri-Nations. That was a significant achievement as no other side had beaten the All Blacks three times in a row during one season in the professional era.

Although this was effectively two sides under the guidance of White and De Villiers, the bulk of the players were used by both men. The nucleus of the 2007 World Cup-winning team and the side which won the Tri-Nations and the series against the British and Irish Lions in 2009 were mostly the same players.

The captaincy of hooker John Smit was crucial during the World Cup triumph but, by the time of the three-Test series against the Lions in 2009, he was no longer the best player in his position with Bismarck du Plessis starting ahead of him at Super Rugby level for the Sharks. De Villiers was left with a selection conundrum but solved the problem by shifting Smit to tighthead prop and his leadership helped the Boks seal the series against the Lions and to win the Tri-Nations.

In Victor Matfield and Bakkies Botha, the Boks also possessed two of the game’s best locks, who complimented each other well with Matfield’s prowess in the lineouts unmatched at Test level during that time, while Botha usually impressed at the coalface of the forward effort. The aforementioned duo, and Smit, were part of a group of senior players who were at their peak during this period, alongside robust flankers like Schalk Burger and Juan Smith, who both brought a hard edge to the Boks’ play.

Amongst the backs, Percy Montgomery excelled at full-back and his goal-kicking played a pivotal role in the 2007 World Cup success. In Bryan Habana and JP Pietersen the Boks had two outstanding wings with Habana widely regarded as one of the game’s best ever finishers. Montgomery’s retirement in 2008 led to Frans Steyn eventually making the switch from inside centre – where he played in the World Cup final – to full-back and he played well in that position during 2009. That meant Jean de Villiers returned to continue his formidable centre partnership with Jaque Fourie while in Fourie du Preez they had a fine scrum-half and master on-field strategist, who played an important role in the implementation of the team’s game plan.

Although the Boks did well during that successful run at the 2007 World Cup in France, none of their matches at that tournament were classic performances. However, the series against the British and Irish Lions lives on long in the memory of Springbok supporters, particularly the series-clinching second Test at Loftus Versfeld in Pretoria which was a brutal encounter filled with plenty of physicality and drama.

The Boks were on the back foot from the outset when Schalk Burger was yellow carded for poking fingers into Luke Fitzgerald’s left eye shortly after the kick off. The Lions made full use of their numerical advantage courtesy of a Rob Kearney try and, although the Boks struck back via JP Pietersen shortly after Burger returned, the tourists continued to hold the upper hand and had a 16-8 lead at half-time.

The Lions continued to dominate and were up 19-8 by the hour-mark but a converted try from Habana reduced the deficit to four points by the 64th minute. That set up a tense finish and after more drama, in which Stephen Jones and Morne Steyn traded penalties and Fourie crossed for a converted try, the sides were level at 25-25 by the 77th minute.

There was still time for a twist in the tale and, after a series of long kicks, the Boks were awarded a penalty after Ronan O’Gara took out Du Preez in an aerial challenge. Although it was 58 metres out, up stepped Steyn to slot the long range goal-kick which sealed a 28-25 victory for the Boks and clinched their series win.