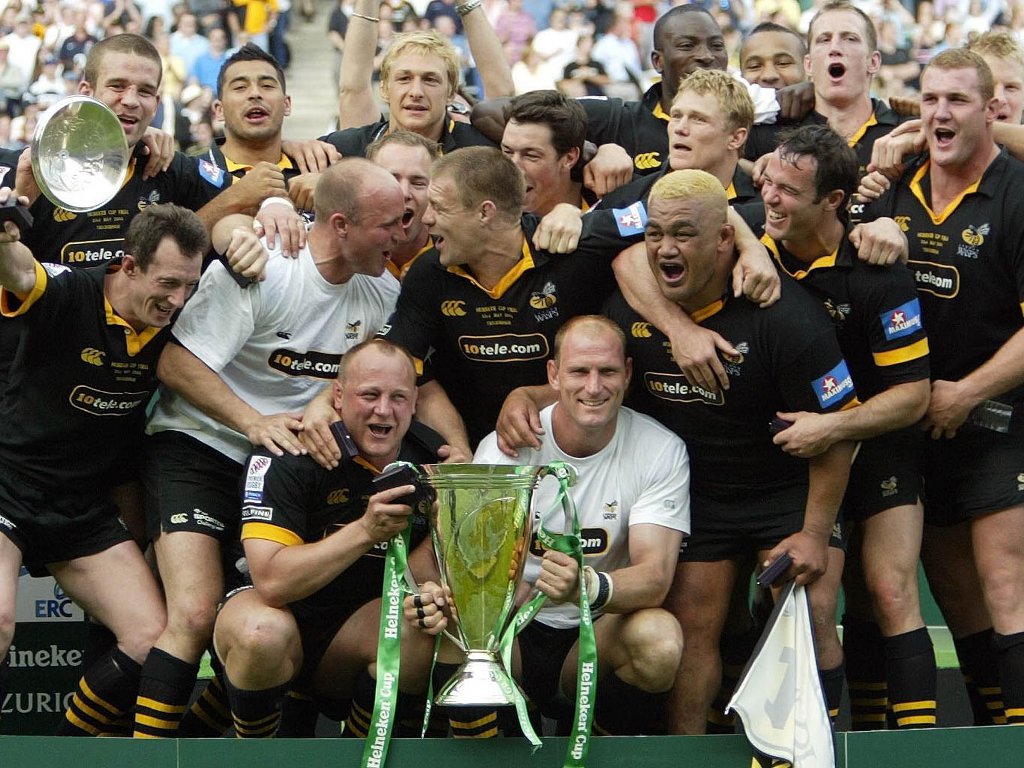 We take a look at the best ever teams to have graced the sport from years gone by and today we delve into the Wasps side that dominated in the Premiership and won two Heineken Cups.

After the introduction of England’s top-tier in 1987, it was Bath and Leicester Tigers that initially enjoyed the most success – albeit Wasps had twice broken up that duopoly – but the appointment of Warren Gatland saw the balance of power shift.

The New Zealander, who had been sacked by Ireland in November 2001, immediately changed the culture and game plan, helping the club to three successive titles and a Heineken Cup triumph in 2004.

He – and the club – also benefited from the introduction of the play-off system as three successive second place finishes did not matter. Previously, the champions had come from the league leaders, but the new method to decide the Premiership victors helped this savvy London Wasps outfit as they consistently produced when it mattered.

Gatland’s departure for family reasons in 2005 did briefly halt their remarkable run but a Heineken Cup triumph in 2007 and another domestic title a year later under the excellent Ian McGeechan cemented their place as one of the best teams there has ever been in England and in Europe.

Unfortunately, financial difficulties took over, while the greats which had formed the spine of the squad departed, resulting in a number of barren years. Although it picked up after their move to Coventry, culminating in a final appearance in 2017, this once outstanding side has never quite been the same again.

Inconsistency had plagued the team under Nigel Melville as a second place finish in 2001 was followed by mid-table disappointment in ’02, but the hiring of Warren Gatland proved to be a masterstroke.

Having been sacked by Ireland, a decision which divided those in the Emerald Isle, the New Zealander was looking to rebuild his reputation and the combination was duly club-defining.

With him and defence guru Shaun Edwards making up the brains trust, they had two outstanding operators that revolutionised the game in Europe. Edwards brought the now famed blitz defence to prominence during his tenure at the club and that, combined with Gatland’s ability to adapt and work out a plan which best suited the players he had, made them a formidable proposition.

The squad was not necessarily star-studded, despite the presence of a few England greats, but it was filled with wonderful, and often underrated, club men that gave their all for the cause.

Even their weaknesses were brilliantly – and perhaps rather cynically – hidden. The scrum was a constant thorn but there were accusations that they managed the situation by faking injuries and forcing the set-piece to be uncontested.

The lineout was also problematic at times, particularly when Trevor Leota was at hooker, but once again Wasps were never affected as much as they should have been. Under Gatland and McGeechan, Wasps rather dispelled the notion that you can’t win without an effective set-piece. Instead, their defensive brilliance, the control at half-back and the game-breaking ability out wide saw them dominate.

The obvious stars took the limelight, such as skipper and England legend Lawrence Dallaglio, who was a gargantuan presence at number eight, and speedster Josh Lewsey. Fellow Red Rose greats Joe Worsley and Simon Shaw were also hugely influential, but the story of Wasps’ excellence often goes beyond those individuals.

They were stacked with players that contributed so much but were often undervalued by the wider rugby public. Coach Edwards was the man that pioneered the blitz defence but centre Fraser Waters was the player that led it. A brilliant runner with an eye for a gap, Waters was a superb attacking talent but it was his ability to lead the rearguard that allowed them to be so effective.

Waters only won three caps for the national team and that theme was followed by a number of Wasps stalwarts. Fly-half Alex King (five caps) was utterly brilliant for the club while Tom Voyce (nine caps) was a consistent performer on the wing, but they never quite made the cut at the highest level.

At full-back, there was the man with a deadeye boot, Mark van Gisbergen, and he was joined in the backline by Stuart Abbott who, like those aforementioned players, never made it beyond the 10-cap mark. For any Premiership side that is successful and adheres to the salary cap (we’re looking at you Saracens), those clubmen are vital and they had them in abundance.

They also recruited well outside of England, bringing in Trevor Leota and Rob Howley, who enjoyed immensely successful spells. Leota left in 2005 but was replaced by French legend Raphael Ibanez, while Irishman Eoin Reddan and Red Rose great Matt Dawson stepped up after Howley departed.

Wasps had never really displayed their credentials in Europe, with a quarter-final appearance in 2000 their best effort, but that changed in 2004 as they reached the last-four stage following a dominant 34-3 triumph over Gloucester at Adams Park.

They were hugely impressive during that season but a daunting trip to Dublin awaited for Warren Gatland’s men. Munster were desperate for the title having missed out in 2000 and ’02, and had the fervent support of Lansdowne Road behind them in the Heineken Cup semi-final.

The Irish province duly fed on that, as well as Wasps’ ill-discipline, to put themselves in a strong position going into the latter stages of the contest. At 32-22 in front, they seemed destined for a place in the showpiece event for the third time in their history, but the Englishmen had other ideas.

Gatland’s charges increased the pressure, resulting in two yellow cards for the Irish province, and they levelled matters through King’s penalty and Voyce’s try. With the visitors very much in the ascendancy, they continued to create problems for the Munster defence and Leota completed a remarkable turnaround with three minutes remaining.

While it wasn’t at the Limerick outfit’s impenetrable fortress of Thomond Park, Munster simply didn’t lose Heineken Cup games in Ireland, but Wasps somehow found the resilience and skill to secure a superb win.

The Premiership side would then go on to play Toulouse in the final where they produced a similarly dramatic late show to claim their first top-tier European trophy.