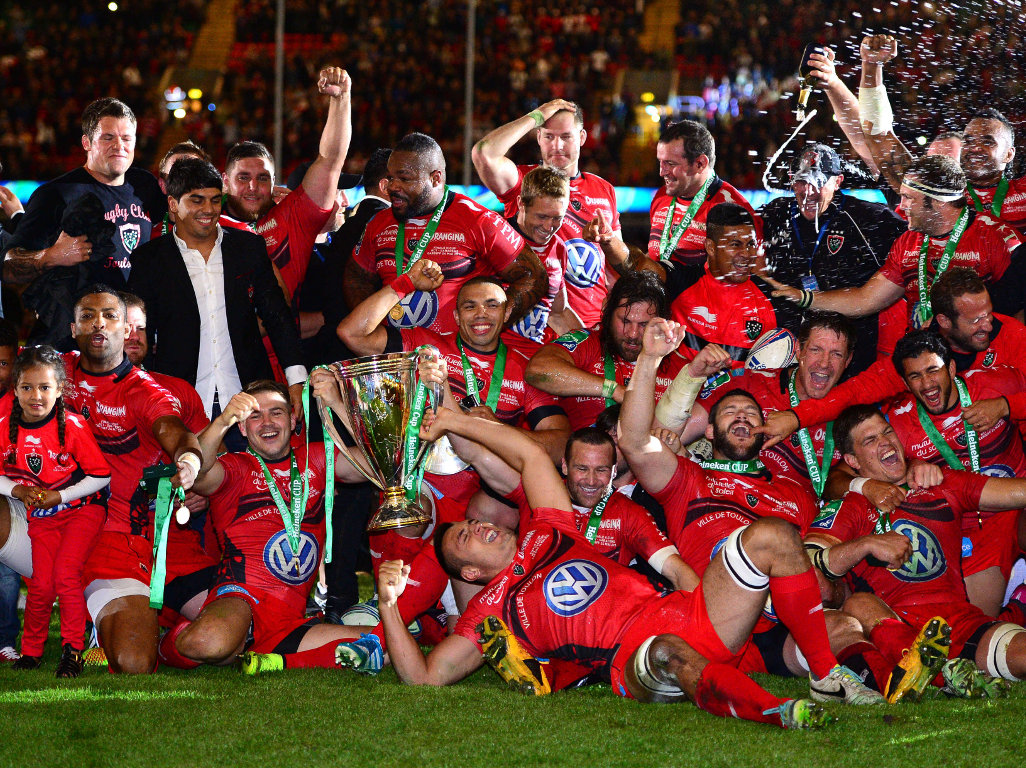 We take a look at the best ever teams to have graced the sport from years gone by and today we delve into the Toulon side that dominated the Heineken Cup.

There have been a couple of attempts to copy the ‘Galactico’ model started by football club Real Madrid. Saracens, with the big-name additions of Michael Lynagh, Francois Pienaar and Philippe Sella in the mid-1990s, were the first immediately after the advent of professional rugby, but this French outfit were by far the most successful.

Money does not guarantee success and indeed the efforts of maverick owner Mourad Boudjellal went unrewarded at the top level for several years. Defeats in finals to Cardiff Blues, Biarritz (both Challenge Cup) and Toulouse (Top 14) hinted at a side that lacked togetherness.

There is more to winning trophies than fiscal power and Bernard Laporte, who was appointed in 2011, did an excellent job of bringing together this bunch of global stars. It duly resulted in unprecedented excellence as they became the first – and so far only – side to win the European title on three successive occasions.

Sandwiched in between those victories was a Top 14 triumph as they secured the double in the 2013/14 season in what was their most dominant campaign under Laporte. However, following his departure in 2016, they have struggled to recapture their glory years, which yielded one of the great teams on the continent.

They had a vast array of stars from around the world which formed an incredible team full of experience and talent. You could hardly call them a home-grown success story that drew admirers, such as Leinster or Munster, but it was certainly effective.

French players were few and far between, with Xavier Chiocci, Guilhem Guirado, Sebastien Tillous-Borde and Mathieu Bastareaud the only individuals to feature in the 2015 final, and that was really the key to the dislike of their on-field brilliance.

Toulon were duly rather loathed by the public for their approach to the sport. It did not help that their owner was never far from controversy, an attitude which made him and the club almost universally hated. As a result, there was always an uneasy feeling surrounding their triumphs.

It made for entertaining fare, however, and their team was a hugely impressive unit that dominated Europe’s top-tier competition for three years. Their pack was gargantuan while the backline was well-balanced, mixing decision-makers with power and pace.

Ultimately, those players didn’t care what anyone thought. The experienced South Africans, New Zealanders, Englishmen and Australians were there to do a job and win silverware, and they managed to do just that. Often legends in their own country, they had seen it all before and the criticism was used as a motivating factor for their success.

Even when the competition changed from the Heineken Cup to the European Champions Cup in 2014, it did not halt Toulon’s surge as they made it a hat-trick in May 2015 after defeating Clermont Auvergne for the second time in three years.

Despite the presence of almost every foreign-born rugby legend from the previous decade, there were some important French players that were key to their victories. The biggest, both metaphorically and physically, was centre Mathieu Bastareaud, whose presence in the midfield was vital. On either side of the ball Bastareaud was effective, whether it was carrying in traffic or making turnovers at the breakdown, he proved to be one of the best players on the continent.

Hooker Guilhem Guirado, who joined in 2014, was also a dominant factor in the squad, while underrated scrum-half Sebastien Tillous-Borde was an ever-present during their remarkable run of success.

There was, understandably, much focus on the global stars that made up the bulk of the squad, however. The most influential was perhaps pivot Jonny Wilkinson, an icon of English rugby that immediately became a favourite with the Toulon supporters when he signed in 2009.

After an injury-hit few years, the move to France revitalised Wilkinson and, alongside Australian playmaker Matt Giteau, they formed a world-class midfield axis. The fly-half departed in 2014, with Giteau taking over in the 10 position for the 2015 final, but he left an indelible mark on the club.

So too did Wilkinson’s fellow Englishmen Delon Armitage and Steffon Armitage. Less heralded perhaps but just as influential, the ex-Red Rose internationals were outstanding servants to the French outfit’s cause, particularly in the case of younger brother Steffon, who was named European Player of the Year in 2014.

The powerhouse flanker was absolutely destructive during their successful period, albeit he was helped by a front five which contained several legends of the game. From former All Blacks Carl Hayman and Ali Williams to 85-times capped Springbok Bakkies Botha, they had a dominant set-piece.

That allowed Armitage and fellow back-rows Juan Smith and Juan Martin Fernandez Lobbe to thrive and complete what was an outstanding squad.

They were a great side throughout those three years but it was in 2014 where they peaked, claiming a domestic and European double. The first trophy Toulon secured that season was the Heineken Cup in May following a comfortable 23-6 victory over an improving Saracens outfit.

The perfect end to a glittering career. ✨

Jonny Wilkinson signed off in style in 2014. 15 points, zero misses, and a standing ovation as Toulon defended their #HeinekenChampionsCup title. 🏆 pic.twitter.com/ZNcdU7K8nE

The Englishmen had dominated one of the favourites for the competition, Clermont Auvergne, in the semi-finals, scoring six tries in an incredible 46-6 success at Twickenham, but they had no answer to the experience and power of Bernard Laporte’s men in the showpiece event.

Although Sarries opened the scoring via Owen Farrell and were boosted by Juan Martin Fernandez Lobbe’s yellow card, Wilkinson’s and Giteau’s ability to spot opportunities presented Toulon with the first try of the match as the Australian centre scampered over the line.

The French side remained in control going into the second period thanks to a drop-goal and a penalty from their pivot before they produced the decisive score. It was a wonderful move as Bastareaud broke down the right and off-loaded to Smith, who exchanged passes with Lobbe and touched down out wide.

They ended up easing to a 17-point win which confirmed their second Heineken Cup title and one half of a memorable double. Just a week later 15 points from Wilkinson helped them overcome Castres 18-10 in the Top 14 final as the England legend finishes his career in style.