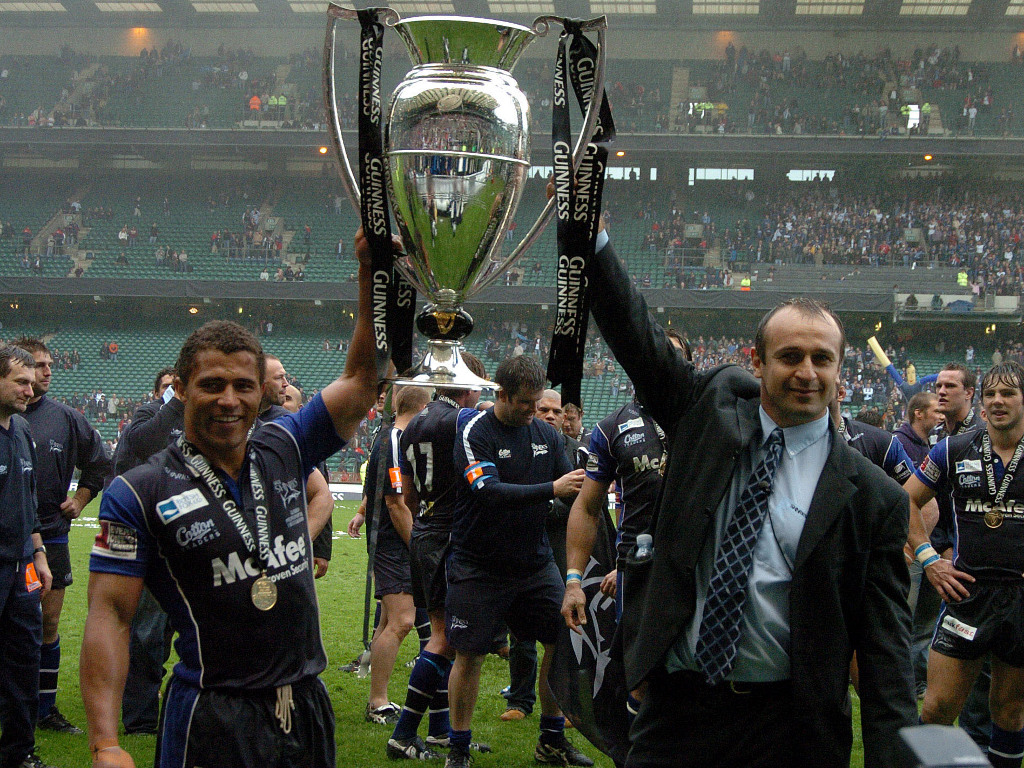 We take a look at the best ever teams to have graced the sport from years gone by and today we delve into the Sale Sharks side that won the Premiership in 2006.

Between 1999 and 2005, English powerhouses Leicester Tigers and London Wasps had a stranglehold on the domestic title, but along came a small club based in Greater Manchester to break the grip those two had on the trophy.

Backed by ambitious owners Brian Kennedy and Ian Blackhurst, they took the controversial step of replacing Jim Mallinder with French legend Philippe Saint-Andre and began to transform their transfer strategy. While they retained the home-grown core which had produced a series of solid results between 2002 and 2004, they added some stars from across the English Channel.

Saint-Andre used his connections to bring in individuals from his home country to strengthen an already excellent squad and it paid dividends in 2005-06 as the Sharks claimed their first Premiership title.

They dominated the regular season, losing just five games and finishing top, before wins in the play-offs over Wasps and Leicester confirmed their status as the best team in England for that campaign.

Saint-Andre’s men had a huge pack, consisting of a home-grown core and some international stars. Despite the director of rugby being one of the great wingers during the 1990s, by design he preferred a conservative approach and they had the players up front to adhere to that.

With those eight forming a dominant platform, their excellent half-backs could control the match, but a potentially lethal back three – a hallmark under their previous boss – were given fewer opportunities.

They weren’t made redundant but the likes of internationals Mark Cueto and Jason Robinson didn’t quite have the influence of previous seasons. It did not matter, however, as their forwards consistently got on top of their opponents at the set-piece and in the contact area.

Most of the sides struggled to halt Sale’s excellence in that area and it formed the basis of their title triumph. Even a powerful Leicester outfit failed to deal with the Stockport-based outfit in the showpiece event as Saint-Andre’s charges enjoyed the rain-soaked conditions at Twickenham.

People tend to forget what a majestic fly-half Charlie Hodgson was, given the criticism he often received when playing in an England shirt. Hodgson had the best passing range of any player in Europe at the time, while his kicking game was similarly pinpoint.

He was the heartbeat of the side and, with the aforementioned forwards providing a superb platform, it allowed the pivot to show off his talents. The 38-times capped international was ably supported in midfield by the experienced Mark Taylor, who was a wonderful player during their title-winning campaign.

However, much of the focus is on those at the coalface. Sale had quality and depth in most positions, particularly at prop, with Andrew Sheridan’s absence not felt due to the presence of the excellent Lionel Faure.

Alongside Faure was two excellent hookers who dovetailed superbly. Outstanding France front-rower Sebastien Bruno provided the power and Andy Titterrell was the bustling, athletic option that was ubiquitous in the loose. They were supported at lock by Argentinian legend Ignacio Fernandez-Lobbe, as well as club stalwarts Chris Jones and Dean Schofield.

The pack was completed by an outstanding back-row which was led by the superb Scotsman Jason White. Although the similarly excellent Sebastien Chabal became a cult figure during his time with Sale and enjoyed an outstanding campaign in 2005-06, White was the glue in that trio.

Going into the 2006 showpiece at Twickenham, Leicester were favourites. Despite finishing in second position, history was on the Tigers’ side, while they had dismantled a talented London Irish outfit in the semi-finals.

What transpired, however, went entirely against those predictions. From the outset, Sale dominated and the Midlanders had no answer to the power of their opponents’ pack. Pat Howard’s men were expected to control the scrum battle but Graham Rowntree, George Chuter and Julian White failed to make any headway against Faure and co.

Instead, the Sharks handled the conditions the better and took an early lead as Hodgson launched a cross-field kick for Cueto to jump and collect. It slipped through the wing’s fingers but Cueto received a slice of luck as it bounced off his leg and he duly dotted down for an early advantage.

Leicester responded via Lewis Moody but the Greater Manchester outfit did not relinquish control and went over for the second time through English youngster Magnus Lund. Although Howard’s charges remained in the contest, Sale struck a decisive blow when a piece of Hodgson brilliance saw the fly-half feign a drop-goal and send Spanish flyer Oriol Ripol across the whitewash.

The Tigers responded in the second period through Jim Hamilton but the accurate kicking of Sale’s pivot, combined with Chris Mayor’s late breakaway try, sealed the title for the Sharks as they became the first team to finish top and win the play-off final.