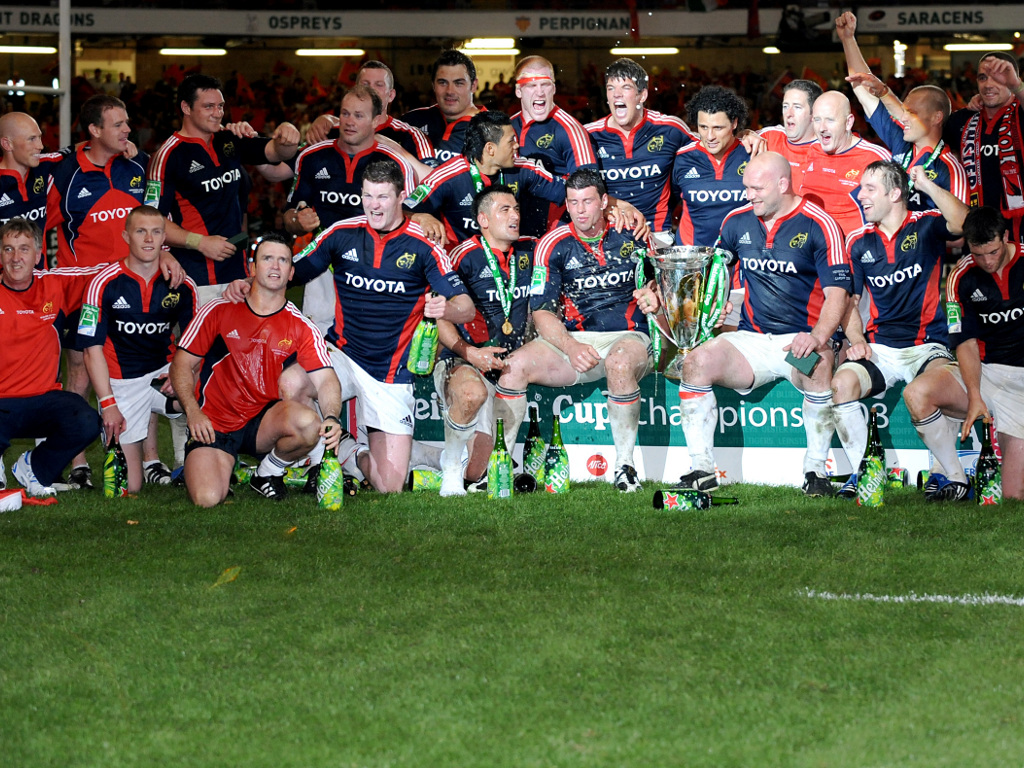 We take a look at the best ever teams to have graced the sport from years gone by and today we delve into the Munster side that dominated the Heineken Cup.

After several seasons of trying to claim Europe’s grandest prize, the Irish province were undoubtedly questioning whether they would ever lift the trophy. Remarkably, they had initially struggled in the early years of the Heineken Cup, regularly failing to make it out of their group, but a love affair with the competition soon began.

Munster made the quarter-final in 1999 before they suffered their first heartbreak a year later, going down 9-8 to Northampton Saints in the showpiece event, before that turned to anger in 2002 when they were denied by Leicester Tigers and the ‘Hand of Back.’

Under the guidance of Declan Kidney and then Alan Gaffney, they also succumbed to one-point losses in the 2001 and 2003 semi-finals, while a dramatic turnaround against Wasps in ’04, where the Limerick outfit had been 32-22 ahead going into the latter stages of their last-four encounter, was similarly galling.

They seemed cursed and destined never to lift the Heineken Cup. That was until Kidney returned ahead of the 2005/06 campaign. The man who led them to two finals in three years was back for another shot and it proved to be the greatest period in their history.

Everything revolved around their pack and particularly the back five, which was simply exceptional. They were gnarly, physical and brutally efficient at the basics of rugby. Other teams in Europe may have had more naturally gifted athletes up front, but the Munstermen understood the game superbly and were extremely well balanced.

Many, if not all, of those players were also regulars in the Ireland side – an era which kick-started the golden generation for rugby in the country – and that experience no doubt aided the Irish province.

The outside backs in 2006 did not have that star quality but they could always rely on their playmakers to control the game and provide field position. In the moments when many would panic, they would remain calm and won a number of tight and important matches in the competition.

Peter Stringer for Munster against Biarritz in 2006. pic.twitter.com/DoFMxYVbMe

There were times in the early 2000s when those results went against them – narrow losses permeated their early Heineken Cup excursions – but that changed upon Kidney’s return into the hotseat.

The victory in ’06 was just reward for Munster’s persistence but, in attempting to defend their title, they were stunned by the all-singing, all-dancing approach that the Llanelli Scarlets displayed in their quarter-final contest.

That was duly addressed ahead of the 2007/08 season and the extra ability behind the scrum paid dividends as the province claimed yet another European crown by defeating French greats Toulouse in the showpiece event.

It was no surprise that they were so strong when the spine of the side also made up the core of a supremely talented Ireland squad. There were legends aplenty in the pack, from front-rowers Marcus Horan, Jerry Flannery and John Hayes to the locking duo Donncha O’Callaghan and Paul O’Connell.

The back-row was similarly impressive as Denis Leamy, Alan Quinlan, David Wallace and the late Anthony Foley were all magnificent servants to the Limerick-based outfit’s cause. Combining physicality with an almost unparalleled ability at the breakdown, they were an absolute nuisance to face and were a key component of this excellent Munster team.

That quartet duly made it much easier for the half-back pairing of Peter Stringer and Ronan O’Gara. Scrum-half Tomas O’Leary also played his part, particularly in their run to the 2008 title, but the Stringer-O’Gara combination became as synonymous with Irish rugby as Gregan-Larkham did with the Australian game.

They provided control with their kicking game. Stringer was the master at the base of the ruck, while O’Gara had an incredible ability to probe the corners and keep the opposition on the back foot. Although neither contained the pace to necessarily break open a match with a piece of individual brilliance, their decision-making and passing range gave opportunities to those in the wider channels.

All they needed was the outside backs to provide them with an added dimension. That came in the shape of Lifeimi Mafi and Rua Tipoki, whose partnership at centre was crucial to their success in ’08, while Doug Howlett brought All Blacks class on the wing.

Everyone remembers the ‘Miracle Match’ when Munster somehow beat a strong Gloucester side 33-6 to qualify for the quarter-finals in 2003, but there was a similar victory on their run to the 2006 title that was especially significant.

It came in the final round of the pool stages as the Irishmen prepared to face Premiership team Sale Sharks at Thomond Park. Despite not necessarily being a giant of the English and European game, the Sharks, under the guidance of French legend Philippe Saint-Andre, were a formidable proposition that season.

They ended up winning the Premiership, thrashing Leicester Tigers in the final, and had already secured their passage into the last-eight of the Heineken Cup having won all five games. Included in that run was a thoroughly deserved triumph over the Munstermen in the reverse fixture as they emerged 27-13 victorious at Edgeley Park.

For starters, Kidney’s men simply had to win – a losing bonus-point wasn’t enough for a best qualifying spot – but for a better seeding in the quarter-final, a dominant performance was required. Of course, there was the Thomond Park factor, a stadium which is impenetrable for most visitors, but this was a pretty experienced and resilient Sale squad.

Surely, Munster couldn’t produce another miracle? Think again, as three years after their most remarkable European display came another effort which only added to the mystique surrounding their home ground.

Kidney’s charges were utterly outstanding as they raced into a 24-6 lead via Foley, Ian Dowling and Barry Murphy tries. The Sharks held firm for much of the second period, keeping the hosts scoreless, but Wallace pounced in the final minute to spark pandemonium in the stands as they sealed the try bonus-point.

It secured a home game in the quarter-final and ultimately gave the Irish province the momentum they needed going into the rest of the competition, culminating in a 23-19 triumph over Biarritz – a team that coincidently edged past Sale in the knockout stages – in the showpiece event.