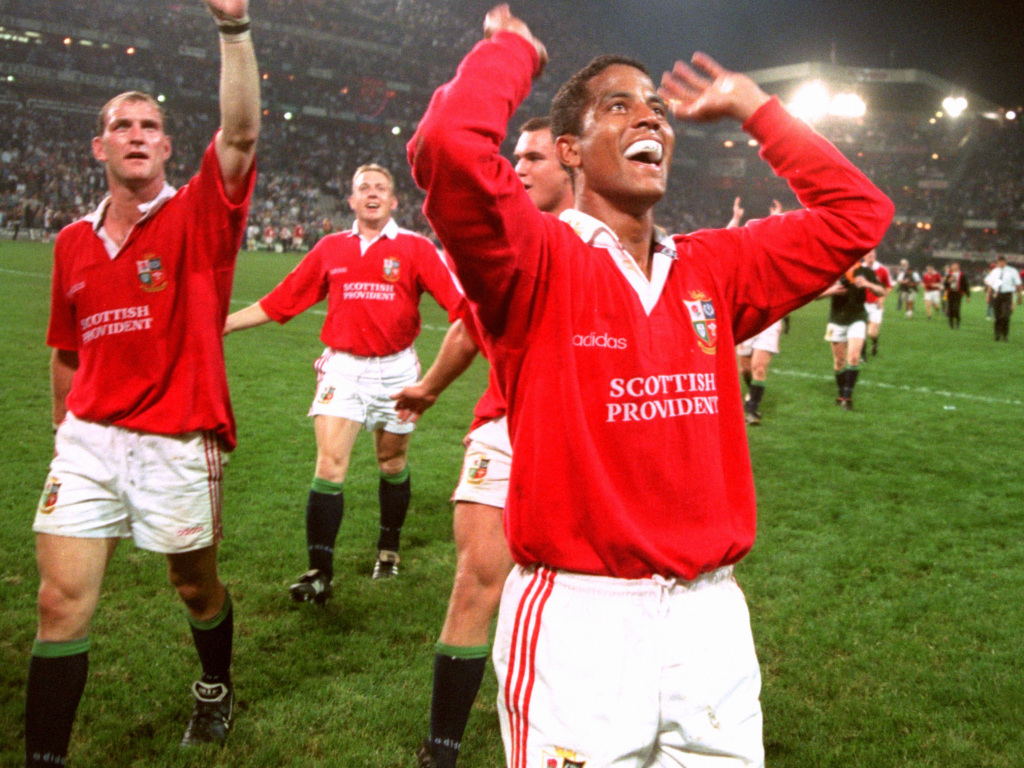 We take a look at the best ever teams to have graced the sport from years gone by and today it is the infamous British & Irish Lions side of 1997.

That South Africa tour will go down as rugby’s watershed moment.

It was the moment that the game truly transitioned from a sporting backwater of amateurism to a river of professionalism, the last of the real ‘long form’ tours, the first to break down barriers between the codes and the first to be truly monetised commercially.

The bare statistics show 13 matches, 11 wins and two losses. The defeats came in the dead rubber third Test, where the Lions were shorn of a number of their key performers, and against an excellent Northern Transvaal side, where former Springbok back-row Adriaan Richter inspired the Blue Bulls to a famous five-point victory.

Elsewhere, the Lions thrilled crowds and supporters alike with daring and pacey rugby, teasing the massive South African packs with guile and technique rather than trying to match them head on. Indeed, one key component of the Test side was the selection of one of the smallest front-rows ever selected by the Lions, where Jim Telfer engineered a unit to go low and get under the behemoth Bok power trio, and in every respect, the Lions outthought rather than outmuscled their formidable opponents.

When Sir Ian McGeechan selected Martin Johnson as his skipper he did so for one reason – he wanted someone to scare the world champion Springboks when they tossed the coin. Whether or not he did that is a moot point, but McGeechan’s perspicacity created arguably the finest skipper ever seen in the professional era and Johnson’s leadership proved to be crucial in securing the series.

McGeechan also had the foresight to understand that whilst professionalism was a novelty for most of his team, the selection of a handful of Rugby League titans could fast track the conduct and attitude of his Union men. It was no accident that so much of the success we witnessed came from the power and pace of the League imports, with Alan Tait, Allan Bateman, John Bentley and Scott Gibbs all pivotal on the field and instrumental off it. In the forwards the propping stalwart Dai Young picked up where he left off eight years previously with the Lions, with Scott Quinnell following in his Dad’s Lion footsteps, filling the back-row stocks with presence and power. These players added an edge of steel, a knowledge of when to train and when to play and, without their input, the tour may well have ended remarkably differently.

‘Geech’ also found fortune in other resources; England had hit a rich vein of talent with Richard Hill, Will Greenwood and Lawrence Dallaglio emerging stars at the start of the tour but going on to be greats of the game thereafter, alongside the more seasoned Jason Leonard, Neil Back and Jerry Guscott. Forwards coach Telfer added inspirational leadership to the coaching team combined with ruthless training sessions and Churchillian speeches whilst every other home union produced players of Test quality to provide a true representation of British and Irish rugby of the time. 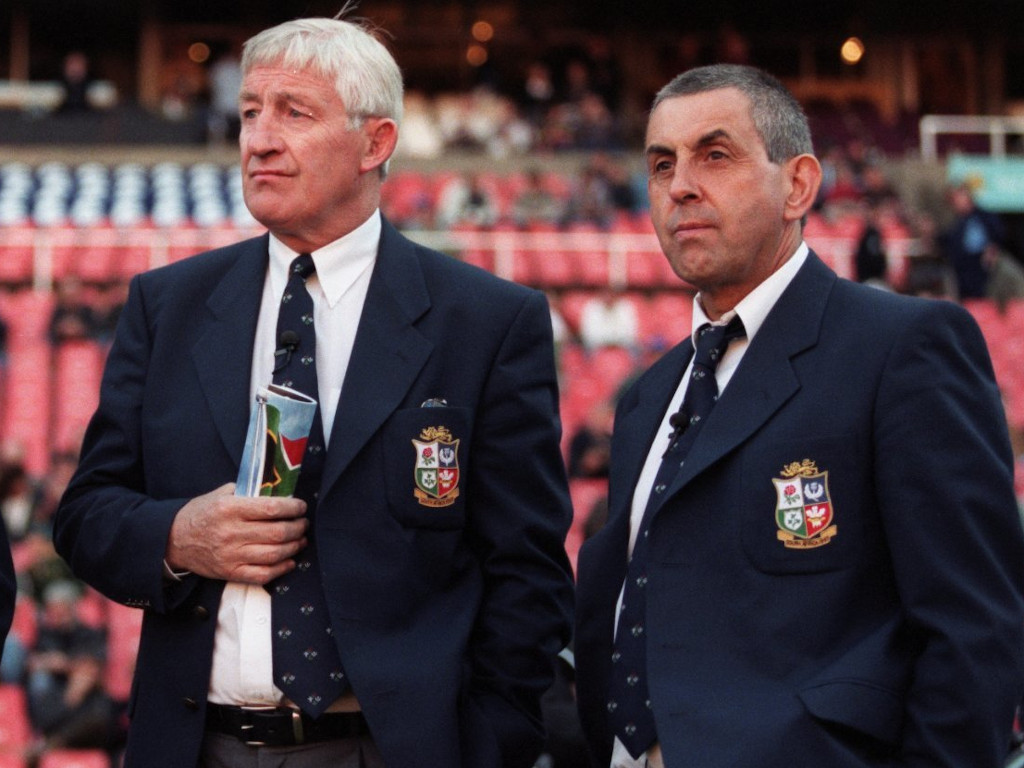 No tour previously had offered so much behind the scenes coverage; few of us haven’t watched the seminal ‘Living with the Lions’ series and never before or since, has any tour been laid so bare and honestly to a viewing audience. There are so many players of today that will go back to those videos and say ‘that’s what made me want to play rugby’, and for that reason alone, the series was definitive in its impact.

Above all, what made this unit of players great was the simple fact they were a ‘team’ in the strongest sense of the word, a band of brothers that bonded together to form something far greater than the sum of the parts. In short, they set the benchmark that rugby would aspire to for the next 23 years and provided one of the greatest Test series ever witnessed.

Whilst Martin Johnson led, his support was substantial, with Lawrence Dallaglio, Rob Wainwright, Keith Wood, Tim Rodber, Dai Young and Allan Tait all able deputies of that leadership group, whether it be midweek or weekend.

But playing South Africa relies first and foremost in matching them physically, and in the Tests, no player characterised this more than Scott Gibbs, memorably described by his co-centre Guscott as the ‘fastest prop in test rugby’. His bump-off of Os du Randt in the second Test will live long in the memory as will his follow-up sledge of “get up you fat oaf” as the big Bok prop lay writhing on the Durban turf.

In the pack, no player worked harder and no voice was louder than that of the ‘Raging Potato’, Ireland’s talismanic hooker, Keith Wood. Wood fused the personal values of the amateur era with that of the new wave and somehow managed to deliver a balance of wrecking ball on the pitch and social chaos off it, exactly what the tour needed. Elsewhere, the boot of Neil Jenkins was so crucial that McGeechan and Telfer played him out of position in Tests at full-back where his unerring accuracy proved a deciding difference between the two sides.

But the real star of the tour, the man that became the household name, was the big winger, ex Rugby League star John Bentley. Very few had even heard of ‘Bentos’ before the tour, but those within the game knew two things about him – firstly, he had gas and plenty of it; secondly, he was a brilliant wit and humourist, as his Lions videos proved during the tour. He was indispensable from the first moment to the last.

If there was one moment outside the Test matches that defined the tour, it was “that try” by ‘Bentos’, a crazy 70 metre symphony of a score in three magnificent movements – the frenetic run out of defence, the impudent side steps in midfield and finally, the majestic gas as the afterburners ignited to propel the Yorkshireman under the posts. In Telfer’s words, it put the tour ‘back on track’. It also catapulted Bentley to fan stardom and a subsequent career in after-dinner speaking, a fact his wife acknowledges to this day as ‘one tour, one run, one try…bloody well get over yourself, Johnny!”

After winning the first Test in Cape Town by a significant margin, with tries from Tait and Matt Dawson, the Lions travelled eastwards along the coast to the tropical humidity of Durban for the second meeting. The brief was simple; the Boks are wounded, they’ll fight for their lives and the Lions need to kill off their prey.

Nobody who was there will forget the scenes at Kings Park; steaming smoky BBQs (braais) lined the car parks outside the ground, adding an atmosphere you could almost taste and that quite literally stung your eyes. It was tribal, two countries going to war with no place for the conscientious objector or lily-livered neutral.

As the Zulu warriors completed their pre-match war challenge in the stadium, so Gary Teichmann and his Springboks catapulted onto the pitch at a speed that at best meant business, at worst meant a degree of panic had set within their ranks. The game was beyond frenetic as South Africa scored one try in the first half, placing immense pressure on the British & Irish Lions where the back-row of Rodber, Hill and Dallaglio managed to repel further damage with an immense first-half shift. At half-time, your gut reaction was that South Africa were 15 points ahead, but remarkably, with Percy Montgomery kicking in lead boots, there was just one point in it at the break with the Lions 6-5 up.

The second started much as the first ended – a titanic collision-based match with immovable objects battling irresistible forces. Another try from the Boks makes it 10-6 before they are 15-12 up with 11 minutes to play. A Jenkins penalty draws the scores level – three tries versus five penalties seems even to the most ardent Lions fan to be a little lop sided, but then suddenly, the Lions take the ball up the left side into the Bok 22. A drive from Gregor Townsend to the five-metre line and, as Rodber’s forehead meets a haymaker of punch from Johannes van Heerden, somehow the ball ends up in the hands of Guscott via Dawson.

As the floodlights pick out the beads of sweat on his forehead and Teichmann launches his charge-down in vain, Guscott’s foot swings and he lands the hammer blow drop-goal to clinch the series. There is no coming back for South Africa – like a boxer who loses his legs, they are down and out.

The Lions are home and history is made.