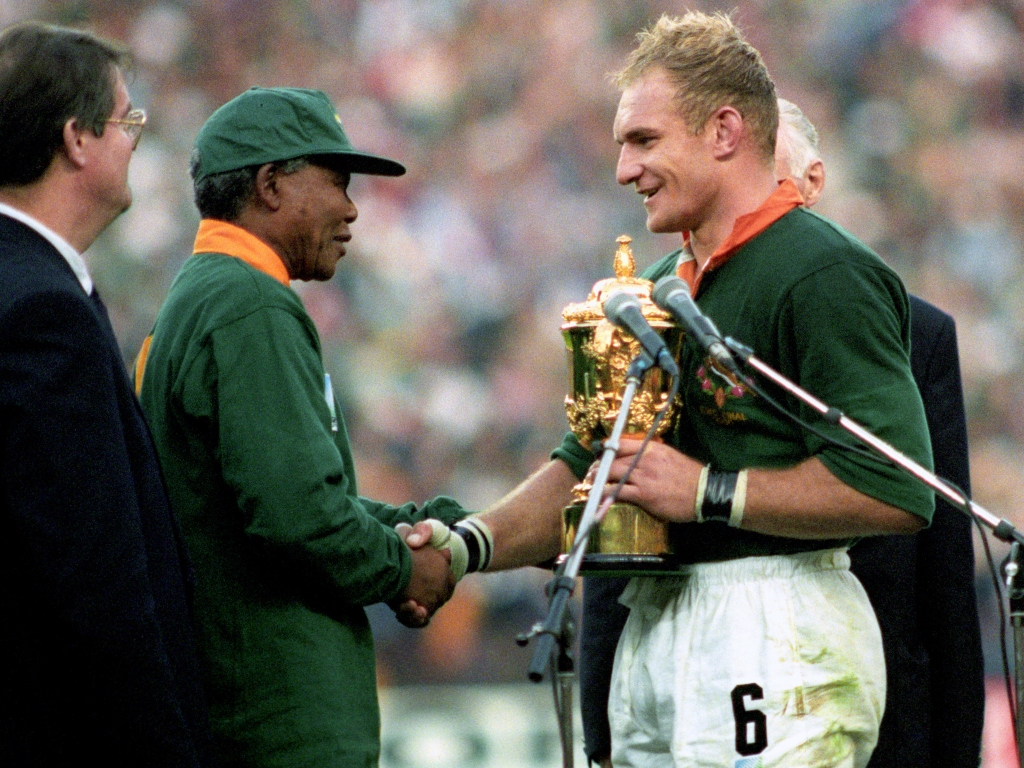 We take a look at the best ever games from years gone by and today head back to 1995 when the Springboks stunned the All Blacks to lift the World Cup.

Having been banned from the 1987 and ’91 World Cups, South Africa was selected to host the tournament in ’95, but it was a rather fraught build-up, both politically and on the sporting front.

The abhorrent apartheid system had only recently ended, with Nelson Mandela, the country’s first black head of state, coming to power in 1994, and, as a result, the nation was divided. Rugby was the white man’s sport and the black community regularly cheered when the Springboks were defeated, but Mandela saw a way of uniting South Africa via rugby union.

With the upcoming global tournament, he viewed it as a unique opportunity to bring people of all colours and backgrounds together. Many resisted and the rest were sceptical but, as the competition got underway, momentum grew.

Their opener was particularly significant. While the country was beginning the process of trying to heal itself, the squad appeared broken and in ’94 they went down to an embarrassing home loss to England.

They responded impressively, however, beating the same side 27-9 and thus started their own journey heading into the World Cup. A draw against New Zealand at fortress Eden Park displayed their qualities before they won five Tests in a row, leaving them in a good position for their home tournament, but their game against Australia was crucial.

The Wallabies were the defending champions and had a strong squad, but the hosts produced an excellent display to emerge 27-18 triumphant. From thereon, they went from strength-to-strength, sailing through to the last four with a dominant 42-14 victory over Western Samoa.

It set up a match against France but a deluge threatened a cancellation, a judgement which would have put Les Bleus through to the showpiece event due to having a better disciplinary record than South Africa, but the pitch was deemed playable. It was a controversial decision, with some describing it as a lake rather than a rugby field, but the home team managed to edge through to the final.

There they would face the mighty All Blacks, who were favourites and had made serene progress to the latter stages. No one had got close to New Zealand and their performance in the semi-final was ominous when they thrashed England 45-29, but this was destined to be the Springboks’ tournament.

Much of the discussion before the game centred around this imposing 20-year-old by the name of Jonah Lomu. A physical freak, who had incredible power and could run the 100 metres in under 11 seconds, the Aucklander had dominated the tournament and scored four tries in their semi-final triumph over the Red Rose.

Lomu became the sport’s first true global superstar as a result and was very much ahead of his time. While rugby union is littered with incredible athletes nowadays, the New Zealander was unique in 1995 and the world wondered how South Africa would deal with his threat.

To the hosts’ credit, they did a mighty fine job, even though the gargantuan back made a few barnstorming runs. The Springboks’ defensive effort was magnificent with the great Joost van der Westhuizen one of those to put his body in the way. The scrum-half’s spirit and sheer will typified his team’s effort as they battled against an outstanding New Zealand team.

The All Blacks weren’t the only side with a talismanic back three player with Chester Williams taking on that role for the Springboks. Williams was their only black player and, as Mandela attempted to bring the country together, he became that symbol of unity.

His performances throughout the tournament were excellent, including a four-try haul against Western Samoa, but like Lomu, his influence was reduced in the showpiece event. It was a tight and tense affair dominated by the packs as they went head-to-head in an attempt to gain the ascendancy.

South Africa’s front-row of Os du Randt, Chris Rossouw and Balie Swart held the All Blacks’ scrum in check, while Ruben Kruger, Mark Andrews and the inspirational Francois Pienaar were typically gallant in the back-row.

It was a match where defences were on top, leaving the respective kickers Joel Stransky and Andrew Mehrtens to accrue the points. They traded three-pointers as the game finished 9-9 after 80 minutes, taking the encounter into extra time.

Mehrtens struck first for the All Blacks before Stransky levelled matters at the break with a third penalty. The Bok fly-half then kicked a sweet drop-goal and they held on to secure their first ever world title, but it was ultimately so much more than a mere trophy.

It was a watershed moment for the country as rugby, for a brief moment at the very least, managed to unite a nation. Of course, racial tensions are still prevalent in South Africa, as it is unfortunately in many corners of the Earth, but this was a time when people of all colours came together to support the previously divisive Springboks.

Sport has the power to do that and it proved to be a defining moment with South African Rugby making progress in regards to equality. Since then, there has been their first black head coach in Peter de Villiers and their first black captain in Siya Kolisi, who of course lifted the Webb Ellis Cup last year.

A lot of progress still needs to be made but that tournament at least allowed the prospect of civility to build between the respective races. Nothing epitomised this more than the picture of Mandela, in his Springbok jersey, handing over the trophy to captain Pienaar. That photo and video have been shown and replayed endless times over the past 25 years and remains one of the most iconic images in rugby history.

It even reached Hollywood as the Clint Eastwood-directed Invictus hit cinemas around the world, starring Matt Damon as Pienaar and Morgan Freeman as Mandela, earning Oscar nominations in the process.

For South Africa, their victory over New Zealand and the way Mandela brilliantly used the World Cup to unify a nation gave his people hope and that, ultimately, is what always drives humanity.

There have been many great moments in rugby’s global tournament, from Jonny Wilkinson’s last-minute drop-goal, to Kolisi captaining the Springboks to the 2019 title and New Zealand’s incredible feat of going back-to-back, but none are as significant as that day in 1995.