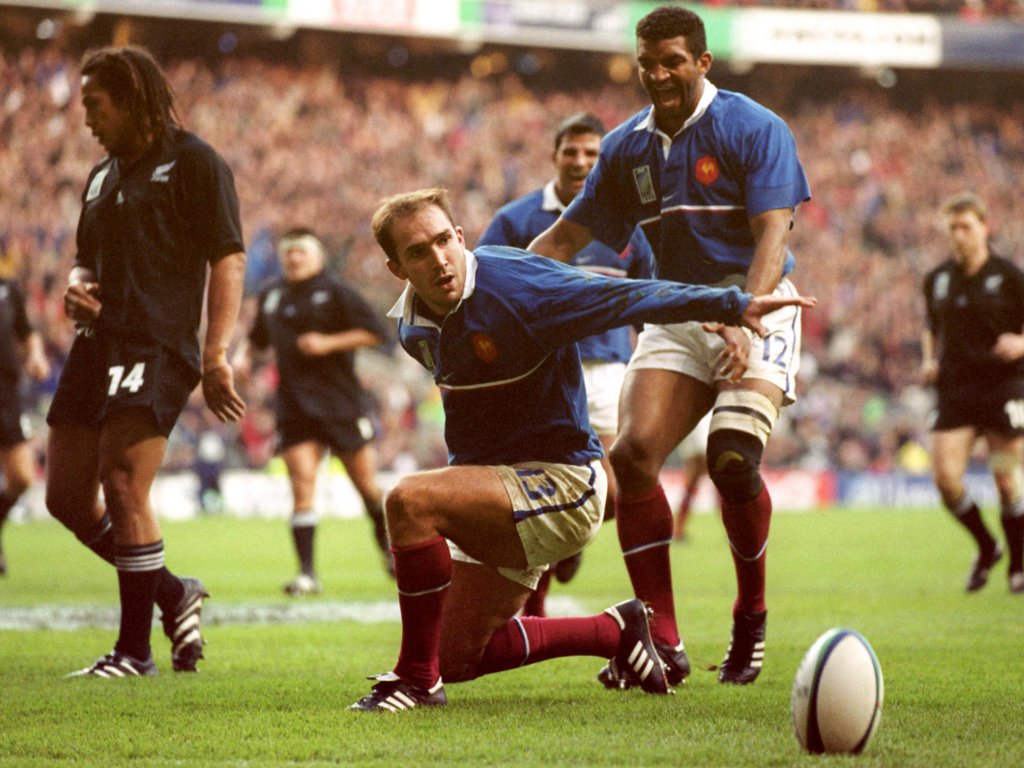 We take a look at the best ever games from years gone by and today head back to 1999 where France stunned New Zealand 43-31 in the World Cup at Twickenham.

They had claimed the Tri-Nations title three times during that period – in 1996, 1997 and 1999 – and in typical fashion, the All Blacks sailed through their group in the global tournament. They secured dominant wins over Tonga and Italy, but it was their comfortable 30-16 victory over England at Twickenham that was the most impressive.

The Red Rose had high hopes going deep into the competition but Hart’s men showed their quality, scoring three tries, including one from the great Jonah Lomu, who had tormented the Englishmen in ’95.

Scotland awaited in the quarter-finals and they were duly swatted aside with relative ease at Murrayfield as the Kiwis claimed a 30-18 triumph. Their form was ominous and in contrast to France, who had struggled to overcome Canada and Fiji in the pool stages.

There was quality throughout Les Bleus’ squad but they failed to find their rhythm in a group which did not contain a tier one nation. The French did improve in the next round, defeating Argentina 47-26, but their run was expected to come to an end against the mighty All Blacks.

When it works for France, they can simply be unstoppable. Even against the great New Zealanders, Les Bleus always possess the talent to rip through any team and, after a first half which saw them almost out of the game, their riposte was remarkable.

The opening 45 minutes went to script with the New Zealanders going 24-10 ahead thanks to a brace of barnstorming scores via Jonah Lomu and the accurate kicking of fly-half Andrew Mehrtens, but there was a sense that the French were still in the fight.

They had produced a blistering start when the wonderfully balanced runner Christophe Dominici scythed through the heart of the Kiwi rearguard, allowing Richard Dourthe the chance to send Christophe Lamaison across the whitewash.

It was a move of absolute brilliance from Jean-Claude Skrela’s men, who had been forced to shuffle their pack ahead of the encounter. Lamaison was not supposed to start but came in at fly-half after the supremely talented Thomas Castaignede had pulled out injured.

Rather inexplicably and in almost typical French style, it turned out to be the match-winner as the replacement pivot guided them to an incredible victory with a brilliant display full of composure, supreme decision-making and Gallic flair.

When the favourites went 14 points ahead, they appeared destined to qualify for the final, but France’s playmaker had other ideas. Successive drop-goals and a brace of penalties chipped away at that lead as panic started to set in for Hart’s charges.

That was demonstrated when a mix up in backfield allowed Dominici to scamper over before another nicely-weighted kick from Lamaison saw Dourthe extend their buffer.

While it was not necessarily game over at that point, with a quarter of the match still remaining, New Zealand’s minds had gone and Philippe Bernat-Salles rubberstamped one of the great World Cup wins with a breakaway effort following wonderful work by flanker Olivier Magne.

A late Jeff Wilson score was mere consolation as Les Bleus – and probably the rest of the rugby world – celebrated one of the biggest shocks in the tournament’s history.

For starters, France were not supposed to win. After three Tri-Nations wins in four years and a team which contained some genuine greats of the game, New Zealand were clear favourites for the title.

Meanwhile, Les Bleus were struggling having suffered a dismal Five Nations campaign, winning just one match and finishing at the bottom of the table. Their route to the semi-final was also made easier by the fact they didn’t face any of the top teams from either hemisphere.

Like most French national sides, they did not lack talent but form pointed to a comfortable victory for the All Blacks and indeed the first 45 minutes suggested that would be the case.

Then came the comeback, which is another reason why it is so fondly remembered. Against a team as talented as the All Blacks, they appeared to be in an impossible position but France threw caution to the wind and stunned the rugby world.

Skrela’s men played with such panache and confidence that their opponents had no answer to the brilliance they displayed in that second half. While the Frenchmen’s triumph over New Zealand in 2007 was perhaps a bigger shock, given that the All Blacks had been even more dominant leading into that global tournament, this still ranks higher for many.

The flair, the unfolding panic of Hart’s charges and the ease with which the Europeans cut the 1987 world champions apart was memorable and brought the 1999 World Cup to life.