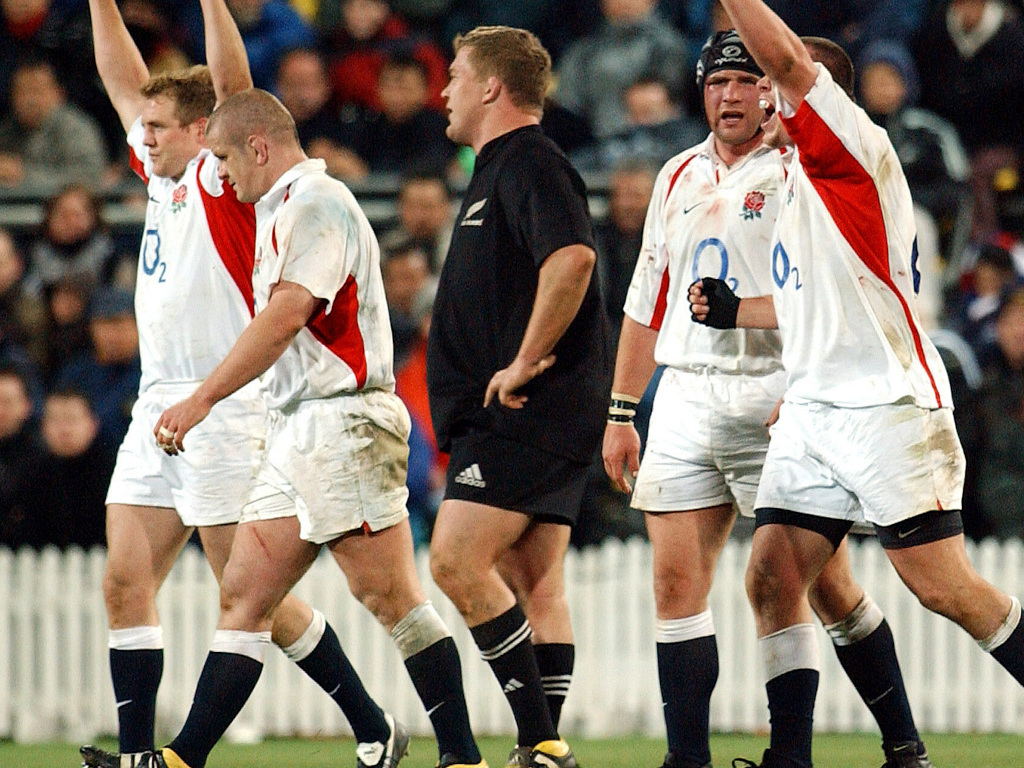 We take a look at the best ever games from years gone by and today head back to 2003 when England beat New Zealand 15-13 in an epic tussle in Wellington.

This was a golden era for England under Clive Woodward as a generation of players who will go down in history as being some of the country’s greats were at the peak of their powers. The team picked itself and was the perfect mix of nous, strength, skill and dynamism as the fruits of hard work were there for all to see.

Since a loss to South Africa in Pretoria in 2000, the Red Rose had gone on a remarkable run of winning 25 out of 27 internationals, which sent them down to the southern hemisphere full of confidence and with a Six Nations Grand Slam in their pocket to boot, the sealer being that outstanding win over Ireland in Dublin.

But this was the ultimate challenge in their lead-up to the Rugby World Cup. Woodward wanted to test his side Down Under and two one-off games, against the All Blacks and Wallabies, were perfect to do just that. He knew that victories would be both a massive psychological fillip for his troops before they returned to Australia later in the year for the global tournament and would also dent the confidence of two giants of the international game, should they collide again in November.

First up on the mini tour schedule it was New Zealand at the Cake Tin in Wellington. The All Blacks were coming into the fixture somewhat cold with this being the first time they had played together in an international since November 23, 2002. Still though, they boasted plenty of class and entered as Tri-Nations holders.

As mentioned this England side picked itself and not just the XV, the whole 22. Led by the talismanic Martin Johnson amongst a forward pack that boasted a formidable tight five that had serious depth, it was the back-row that really stood out as the balance and threat posed by Richard Hill, Neil Back and Lawrence Dallaglio was key in many games. With bench impact to come from the likes of Phil Vickery, Joe Worsley and Dan Luger, this was a special group of players.

Behind the scrum again the names rolled off the tongue as Kyran Bracken was a warrior at scrum-half alongside Jonny Wilkinson, who slotted pressure kick after pressure kick in atrocious conditions. Outside them Will Greenwood and Mike Tindall were rocks in the centre, while Ben Cohen, Jason Robinson and Josh Lewsey played the perfect game in the howling wind. To a man England were faultless in Wellington, making all the right, if sometimes illegal, decisions.

New Zealand meanwhile handed a starting debut to age-grade star Joe Rokocoko in a side led by Reuben Thorne. He was joined in the back-row by Richie McCaw and Rodney So’oialo, with Ali Williams and Chris Jack two outstanding operators in the second-row. Anton Oliver was their experienced hooker.

Ma’a Nonu was also on Test debut in the backline, joined in the midfield by Tana Umaga, with Justin Marshall and Carlos Spencer two dangerous half-backs the English would need to keep an eye on throughout the contest. However, with all of Spencer’s mercurial skills, the difficult weather conditions meant it was a day for safe plays and unfortunately his goal-kicking was not up to scratch. Wilkinson’s was the opposite and that proved vital on a landmark day for England.

While it was not a high-scoring and what many would view entertaining match, the importance of this victory to England and how they went about it had the feel of a watershed moment in their journey. It remains to be seen would England have gone on to win the Rugby World Cup if they did not pick up these wins on tour, but win they did and this victory at Westpac Stadium added to their belief as a group as they went on to blow the Wallabies away in Melbourne seven days later.

That Wellington fixture began with the Red Rose putting Spencer under immediate pressure as he looked to clear from the kick-off. He was charged down by Ben Kay and then coughed up a penalty for holding on. It set the perfect tone from an English point of view that they meant business and Wilkinson did the rest for 3-0.

After 15 minutes it was 3-3 but Spencer was struggling in the conditions with a one from three record off the tee. In contrast Wilkinson’s touchline effort on 26 minutes was a thing of beauty and compounded New Zealand’s missed points-scoring opportunities. It wasn’t pretty but England were winning the mini battles.

Indeed, pivotal moments would come frequently for England and the majority transpired from titanic defence. One such was on the half-hour mark when Dallaglio won a key turnover in his 22 as he ripped the ball from an attacking All Blacks maul to relieve the pressure. It was these moments that made this side great.

Wilkinson’s trusty left boot continued to play a prominent role after the break and his penalty from 40 metres out showed, once again, his reliability off the tee.

But what followed next was quite incredible from Woodward’s side. After first losing Back for a ruck offence on 46 minutes, Dallaglio would follow him to the sin-bin two minutes later for side entry five metres from his own try-line. Suddenly New Zealand were two men up as a try and possible victory now seemed ominous.

However, incredible defence kept So’oialo out and New Zealand were repelled in what felt a pivotal passage in the match. Not only did they survive that period of numerical disadvantage, England would in fact come out on top 3-0 as Wilkinson nailed a difficult fourth penalty to rubber stamp a massive psychological win.

England were subsequently 12-6 to the good and with the All Blacks overplaying in their own half, Dallaglio would pounce yet again with a turnover and England smelt blood. Momentum was built in the 22 before Wilkinson’s cool head saw him bang over a drop-goal that crucially moved his team into a two-score advantage.

New Zealand did manage to strike back with a converted try from Howlett shortly afterwards, but England would keep them at bay for the closing 15 minutes, this after another Spencer penalty attempt was wayward. England’s defence then held firm but in the end they ultimately finished the game relatively comfortably.

Cue celebrations from the English as this win was the next significant step as a group together. They went to Melbourne battered and bruised but with masses of confidence, winning well to finish their pre-tour objective of laying a marker Down Under. That they did before returning later in the year to reap the rewards of the seeds they had planted in June, with the rest of the world having been put on alert that this team was the real deal. The rest, as they say, is history.