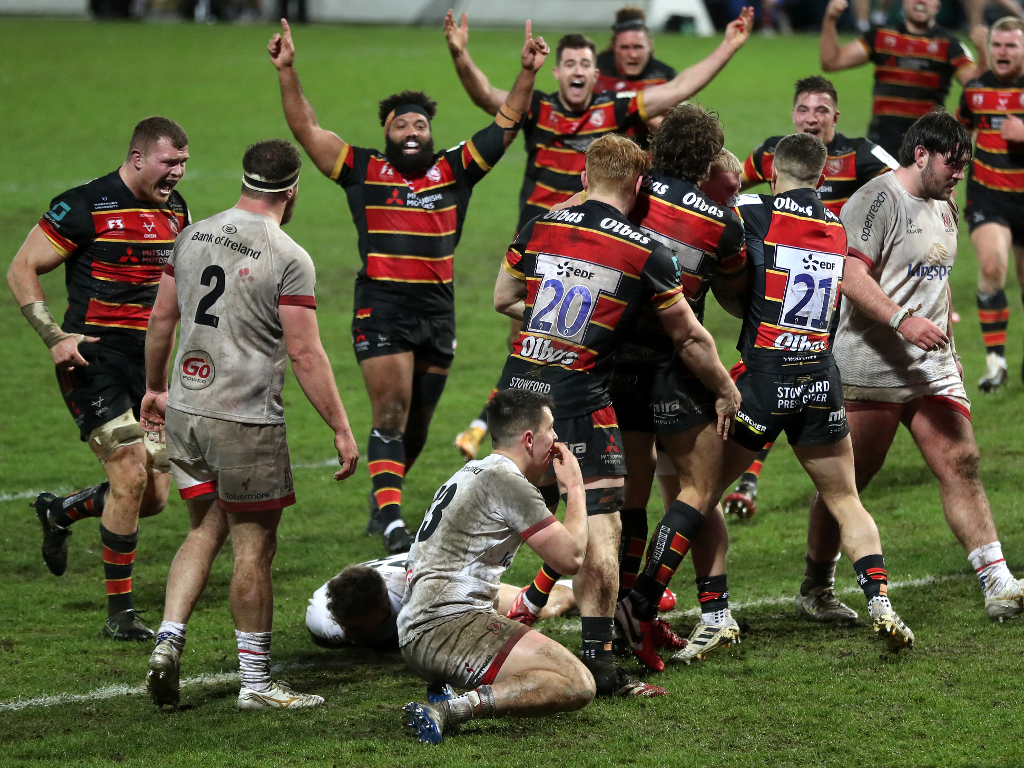 Gloucester put Danny Cipriani’s departure from the club well and truly behind them as they recorded a stunning 38-34 Heineken Champions Cup victory over Ulster.

And how Gloucester responded, delivering arguably their best performance under head coach George Skivington just six days after they were routed 55-10 by Lyon.

Gloucester conceded 17 points while their Wales wing Louis Rees-Zammit spent 10 minutes in the sin-bin, and it looked like proving costly until Barton came up trumps.

The Cherry and Whites revived hopes of progressing in this season’s tournament, but Ulster are pretty much down and out following two defeats.

Skivington made 12 changes from the side crushed by Lyon, with only full-back Kyle Moyle, prop Ciaran Knight and captain Lewis Ludlow remaining.

Burns, meanwhile, was among four switches in an Ulster side that also saw a start for Ireland back-row forward Jordi Murphy.

Gloucester showed no sign of any hangover from their drubbing in Lyon, and they went ahead in the seventh minute through a cleverly-crafted try.

Evans converted from the touchline, but it proved a short-lived advantage as Ulster drew level from their first attack.

Impressive phase-play tested Gloucester’s defence, before Burns skipped through a huge gap from 10 metres out to touch down against his former club, with Cooney converting.

Evans restored Gloucester’s advantage through a short-range penalty, before Ulster paid a hefty price for collapsing successive mauls close to their line.

Referee Alex Ruiz sin-binned hooker Rob Herring for the first one, then lock Alan O’Connor received a yellow card after he pulled down the next one, with Gloucester awarded a penalty try and Ulster temporarily down to 13 men.

But Gloucester could capitalise on their numerical advantage, failing to score a point before both Ulster forward returned.

Cooney kicked a penalty to cut a gap, and he also had a penalty chance from just inside his own half, but the ball fell over as he ran up, and with the allocated kicking time expired, Gloucester were awarded a scrum.

Burns made another break on the stroke of half-time, but Gloucester snuffed out the danger and took a 17-10 lead into the interval.

But two late scores from @gloucesterrugby wins it at the death as they keep their #HeinekenChampionsCup hopes alive 🤯 pic.twitter.com/hQTfTgOO4W

Gloucester, with early sunshine being replaced by driving rain, took just two minutes of the second period to extend their lead.

And again it was their forwards that did the damage, relentlessly driving a close-range lineout before Atkinson joined the charge and touched down for a try that Evans converted via the crossbar into the face of a gusting wind.

It got even better for Ulster approaching the hour-mark when they gained a penalty try following a deliberate knock-on by Rees-Zammit.

Cooney then scored a try that he converted, before a second penalty try for Gloucester was awarded after substitute Ethan McIlroy deliberately knocked on and became his team’s third player to be yellow-carded, then Barton struck.