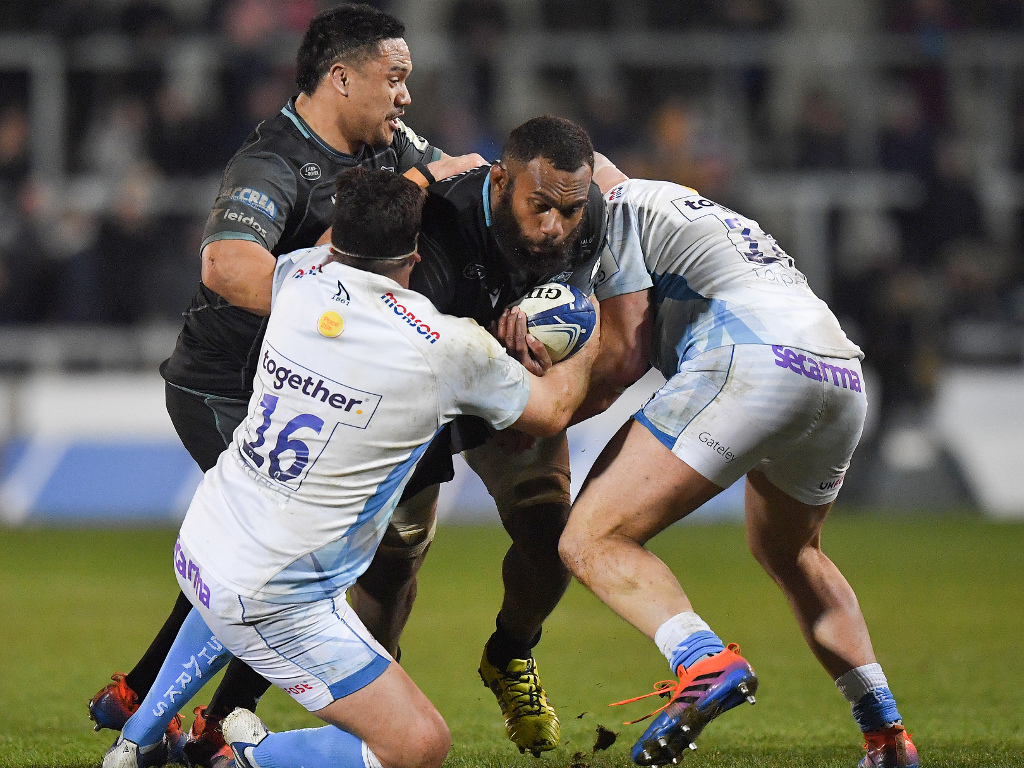 Glasgow Warriors kept their Champions Cup play-off hopes alive when they sealed an emphatic 45-7 win against Sale Sharks in Salford on Saturday.

The Scottish outfit dominated for long periods and scored six tries with Leone Nakarawa, Fraser Brown, DTH van der Merwe, Sam Johnson, Jonny Gray and George Turner all crossing the whitewash. Their other points came via the boot of Adam Hastings, who slotted six conversions and a penalty.

Sale’s points came courtesy of a Jake Cooper-Woolley try which was converted by Tom Curtis.

The Warriors dominated the opening period and deservedly went into the break 21-0 in front thanks to Nakarawa, Brown and Van der Merwe tries.

Johnson then crossed the whitewash to seal the bonus-point before Cooper-Woolley went over for Sale.

Glasgow were always in control, however, and added another two tries through Gray and Turner to secure a comfortable win.

The success moves them into the final best-placed runners-up spot but Dave Rennie’s men will need for both Saracens and Gloucester not to win on Sunday if they are to reach the quarter-finals.

Having seen the Sharks field a weakened team, the Scotsmen started on the front foot and put their inexperienced opponents under duress.

They consistently got quick ball and it was not long until the Warriors had scored their first try when Van der Merwe broke down the left. Although the wing was hauled down, Nakarawa was on hand to score and provide the visitors with the lead.

Half-backs Ali Price and Hastings were dictating proceedings superbly and Sale were unable to cope. That pressure soon resulted in a yellow card as Jono Ross was sin-binned for leading with the forearm before it soon became a 14-point buffer.

Glasgow set up a maul, charged towards the line and the hosts failed to prevent Brown from crossing the whitewash.

The Sharks attempted to get back into the encounter, taking advantage of some Warriors ill-discipline to move into the away side’s 22, but the Scotsmen were stout in defence.

Rennie’s charges forced the English outfit into errors while the PRO14 team were clinical in attack and good hands allowed Van der Merwe to charge over the line.

They came, they saw, they conquered 👊@GlasgowWarriors beat @SaleSharksRugby with a BP on the road and have done everything they can to qualify…

It's now out of their hands as they wait for tomorrow's #HeinekenChampionsCup results 😬 pic.twitter.com/0YdDRDwDWG

Although Nakarawa was sin-binned for a series of team indiscretions, Sale were not able to capitalise and instead the visitors added to their score with the bonus-point try early in the second half. Price benefited from some further slack defence by the hosts to take a quick tap penalty and Johnson eventually touched down.

The game was over at that point but the home side responded with a well-worked effort. It started with Denny Solomona’s break down the right touchline and, despite being taken down short of the whitewash, Cooper-Woolley rewarded the wing’s good work by going over. Curtis added the extras.

There was still a huge gulf in quality in the respective teams, however, and after Hastings had extended Glasgow’s lead with a three-pointer, Gray and Turner touched down – the second a superb individual effort – to rubber-stamp a much-needed victory.

Meanwhile, Exeter Chiefs proved too strong for La Rochelle in their clash at Sandy Park and although the sides were level at 14-14 at half-time, the Premiership side turned on the style after the interval and eventually secured a 33-14 win.

The Pool 2 winners’ tries were scored by Luke Cowan-Dickie, Dave Ewers, Sam Simmonds (2) and Stu Townsend while Joe Simmonds kicked four conversions. For La Rochelle, Kini Murimurivalu scored a try which was converted by Ihaia West and they were also awarded a penalty try.