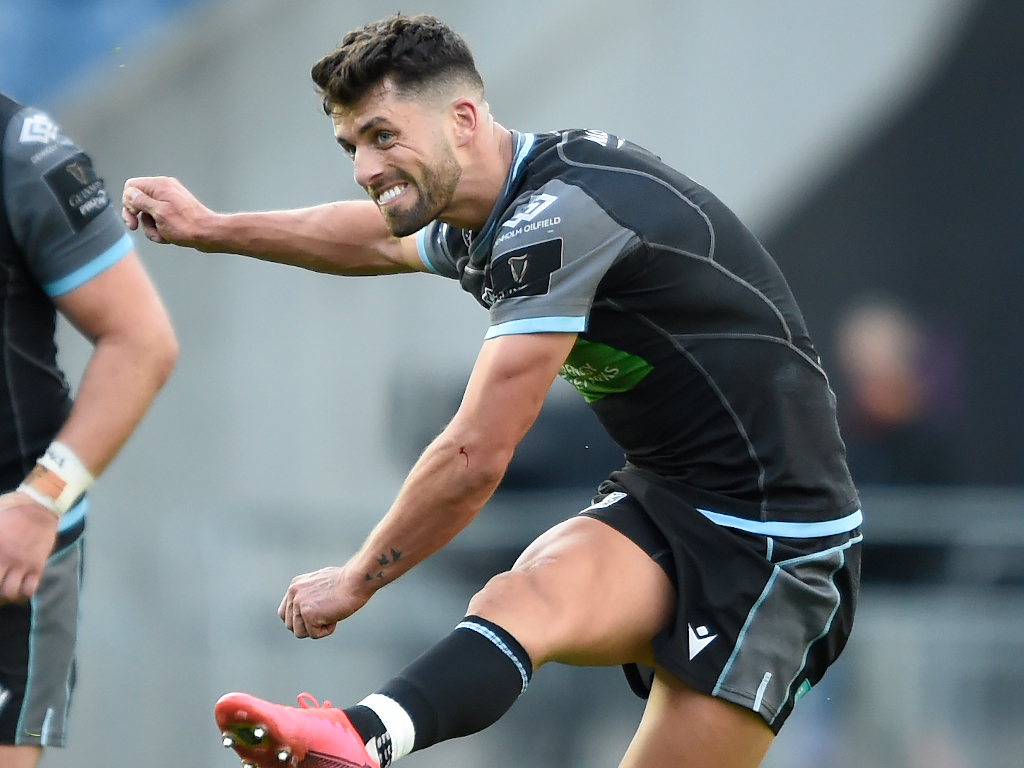 Adam Hastings bid a victorious farewell to Glasgow as he brought the curtain down on his Scotstoun career with a 15-12 victory over Leinster.

The Scotland fly-half is heading to Gloucester in the summer but he bowed out in style as Danny Wilson’s men edged past the Irishmen.

Leinster looked to be heading towards the win until Hastings’ silky offload put Kyle Steyn in for Warriors’ second try.

That levelled the points at 12-12 after the Dubliners had countered Matt Fagerson’s opener with touchdowns from Luke McGrath and Cian Kelleher.

Ross Thompson then nailed a late kick to seal victory after a fiery encounter.

Glasgow go top of the PRO14 Rainbow Cup standings but, having missed out on a bonus point, they are unlikely to reach the inaugural final.

But Hastings at least checks out with a smile on his face.

The 24-year-old has previous with Leinster having been sent off at the RDS earlier this season.

He found himself getting up their noses more than once this time and it was no surprise to see tempers flare between the teams again with an early bout of handbags just eight minutes in.

It was Warriors who landed the first telling blow of the night 12 minutes in, however.

Sam Johnson was held up an inch shy of the line but the visitors were increasingly having to resort to dubious means to keep out the hosts.

Fagerson, though, eventually found the smallest of gaps to sneak through from close range and open the scoring.

Leinster had spent the opening quarter of an hour on the back foot but, having fallen behind, they exploded into life.

Bursting at them from all angles, Glasgow did not know where to look and were eventually beaten all ends up by McGrath’s dummy as the scrum-half darted through to score under the posts.

Hugo Keenan was denied a breathtaking score after some patient grunt work from the forwards was spoiled by Ross Molony’s knock-on.

But Glasgow were struggling to stem the tide, with Cole Forbes sin-binned for a cynical off-the-ball tug on Kelleher on 27 minutes.

It took just two more for the Leinster to ruthlessly exploit the space Forbes had vacated, with Kelleher dancing off his wing to score as Thompson, Fraser Brown and Hastings fell at his feet.

The visitors finished the half a man down after Rory O’Loughlin also saw yellow, while Keenan saw a second score chalked off after Andrew Porter illegally blocked off Rob Harley.

And having survived that scare Glasgow brilliantly hit back on 48 minutes as Hastings’ out-the-back-door offload put Steyn in to to level the scores.

Warriors skipper Ryan Wilson was next to take a 10-minute rest after being cautioned for a neck roll on Porter as things got heated again.

But it was Leinster who found themselves on the wrong side of referee Frank Murphy with 15 minutes left as Thompson fired a meaty kick to clinch victory.

Connacht knocked Ospreys out of the running for the PRO14 Rainbow Cup with a season-closing 26-19 bonus-point victory at the Sportsground.

However, there were no further scores after the break as Ospreys fell out of title contention and Connacht, so disappointed by last week’s error-strewn display at Benetton, ended their campaign on a positive note.

It was also a satisfying night’s work from Ireland centre Aki who, in advance of the British & Irish Lions tour, caught the eye with his try, strong carrying and a turnover penalty.

Ospreys snapped back with a strong forwards drive setting up flanker Morgan Morris to score, but a sliding Aki soon grounded Blade’s brilliantly-weighted kick to make it 14-5.

Thriving from quick ball, Cian Prendergast was next to break the line and Connacht duly capitalised, Delahunt driving hard before Dillane muscled in under the posts.

The maul paid dividends again for Ospreys in the 24th minute, as hooker Parry crashed over. Stephen Myler’s conversion left it 21-12.

Connacht replied with their bonus-point effort, a long bouncing pass from Carty putting winger Sullivan diving past Webb in the right corner.

However, Ospreys got on top as the interval approached. They forced penalties at scrum time, eventually scoring through the powerful Parry after Robertson-McCoy’s departure.

During a much tighter third quarter, the best chance saw Ospreys’ teenage centre Joe Hawkins miss out on an excellent individual try due to a double movement.

Carty pushed a kickable 56th-minute penalty wide – with wing O’Donnell starring in the build-up – but then came to his side’s rescue to thwart Luke Morgan from a hacked kick downfield.

Connacht’s dogged defence maintained their lead late on, replacement Kieran Marmion earning a turnover penalty after his earlier high tackle had almost put him in the bin.