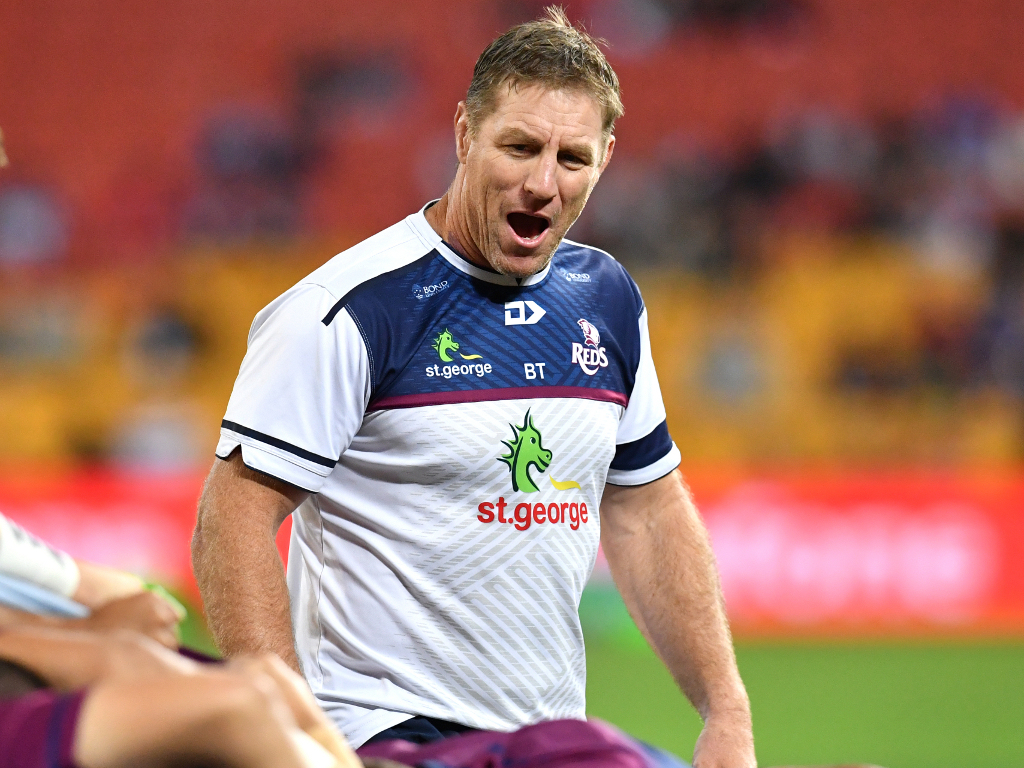 Reds head coach Brad Thorn believes Australia’s Giteau Law has been a strength for Australian rugby, encouraging talent to stay in the country.

Australia’s ‘Giteau Law’, that allows overseas-based players to be picked for the Wallabies if they have played more than 60 Tests, is being reviewed and there has been reports that it could be relaxed for a handful of players.

Wallabies head coach Dave Rennie has been vocal about his desire to pick players from Australia or at least from within Super Rugby, to be able to accurately assess a player’s form.

Some positions, though, have been hit harder than others when it comes to playing depth and there is a reported push to open the door for a select few overseas-based players to run out for the Wallabies.

Second-row is a department that has lost many of its Wallabies regulars in recent years, with Will Skelton, Rory Arnold and Izack Rodda among the names who have headed offshore.

While Thorn stopped short of insisting the Giteau Law should stay, he did say he felt restrictions on Test selection had encouraged more players to stay in Australia.

“I think the strength of New Zealand and Australia is they’ve had that rule, if you’re not there, you don’t play,” he told Rugby Australia’s official website.

“I think Ireland maybe do it over there as well. I think that’s helped keep players in the country, that’s what I’ll say.”

Thorn backed the current crop of locks in Australia to impress in the Super Rugby AU competition and push their Wallabies credentials.

“I think there’s a couple of lads in my side who have the chance to put their hand up, down at the Brumbies there the young lock there Darcy Swain, he’s doing his thing, down at the Rebels you’ve got Matt Philip and at the Waratahs, Simmo (Rob Simmons) and (Ned) Hanigan there,” he said.

“And I haven’t talked about the Force as well but there’s still some talent in the country.

“This is the time where you’re seeing a lot of new talent coming through.

“I think it’s a positive for Australian rugby and this competition is a positive.

“I think by the end of the comp, you’ll have a good feel, some guys will have put their hand up and put their name forward. Probably the thing for me as a coach, I used to think this playing Super Rugby in New Zealand as well, often we talk about the All Blacks, but let’s respect the competition we’re in and we want to win, like the other teams, the competition.

“Let’s do well for Queensland and for the other teams and they do well for those teams, those players, that Wallabies stuff takes care of itself for the players.”

✍️ Have a read of our #SuperRugbyAU match report, here. 👇https://t.co/4hPbfz9QrG

When it comes to keeping the focus on the immediate challenge, Thorn’s men face their first road trip this weekend in a journey that is evocative of reserve grade tours for the dual international.

The Reds will fly into Sydney and bus up to Manly’s Brookvale Oval on Friday ahead of their clash with the Rebels, and will be on a charter flight that night back to Brisbane.

Thorn said while it would be a long day, he expected his team to take it in their stride.

“It’s taken me all the way back to Broncos reserve grade – we used to play around 12 o’clock, one o’clock, you’d be up at the airport at 6 o’clock tired as, you’d play and then they’d send you back home,” he added.

“Unless you sat on the bench, you didn’t even watch the first grade play, you’d be back in Brissie by three.

“It’s similar sort of scenario heading down but the good thing with the lads is we’ve had some experiences this group the last couple of years, we had a round the world tour a couple of years ago, they’ve done plenty of travelling.

“I think it’s a mindset thing, you didn’t hear NSW talk about there travel on the day (last weekend) and we’re not really going to fuss over it either.

“Go down there, get the job done, both sides will be looking to do that and you’re looking for a quality game.”