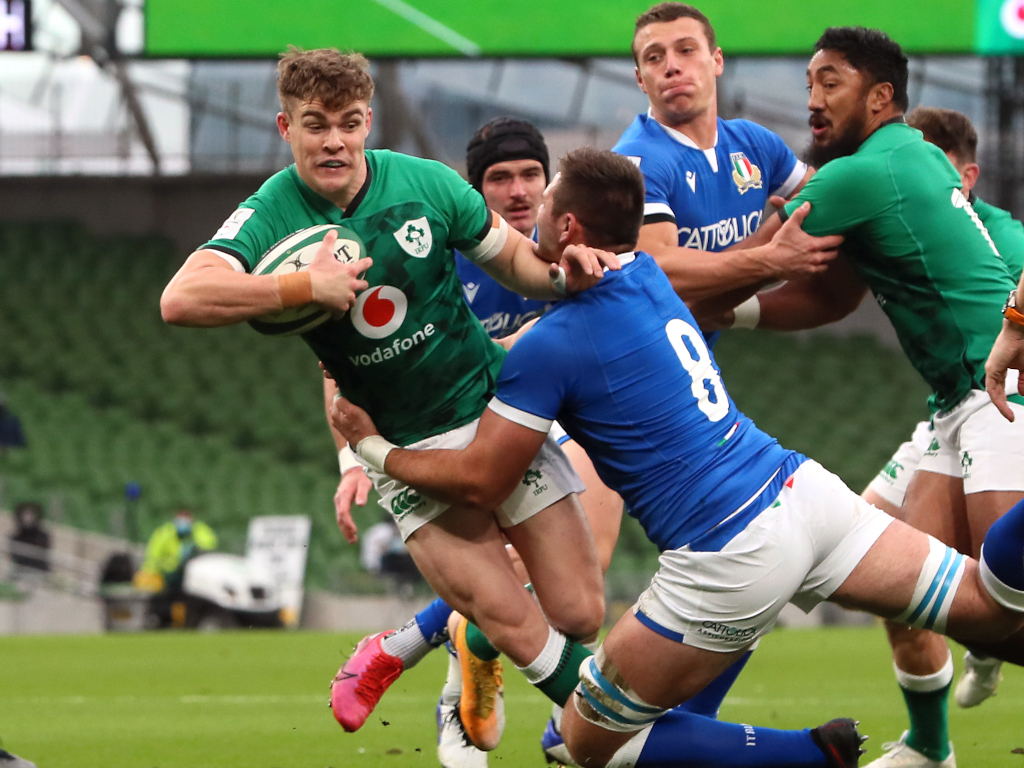 Ireland have been dealt a blow after centre Garry Ringrose suffered a broken jaw in their win over Italy and will be sidelined for up to six weeks.

Ringrose trudged out of the first half of Saturday’s 50-17 Six Nations victory, initially failing a head injury assessment.

The 25-year-old will now miss Ireland’s trip to face France in Paris, where a bonus-point win would hand Farrell’s men the Six Nations crown.

“Garry Ringrose has broken his jaw, so it’s bad news for us all and we’re gutted for him,” said Farrell.

“He’s contributed so much over the last 10 days, he’s been fantastic in his leadership and he was a big part of the reason why we got where we wanted to today.

“It was unfortunate as well, given he’d got over the thumb injury and come back to get back into the mix, and now obviously had a setback like that.

“It’s four to six weeks, so we’re gutted for Garry.”

Hugo Keenan bagged a try brace on a fine Test debut, with the Leinster wing denied a hat-trick after James Ryan was harshly called up for blocking.

Will Connors also capped his own impressive debut with a score, while CJ Stander, Johnny Sexton, Bundee Aki and Dave Heffernan all crossed too.

Italy hit back through Edoardo Padovani and Paolo Garbisi, but Franco Smith’s side were still subdued all too easily at a ghostly Aviva Stadium, with the match played out behind closed doors.

But now new boss Farrell has the chance to steer Ireland to another Six Nations triumph at his first attempt.

Ireland will likely need to make history by securing a first-ever bonus-point win in Paris to swipe the title, however, leaving Farrell well aware of the scale of the task ahead at the Stade de France next weekend.

“If you defend like we defended for most parts today, then we’ll give ourselves a chance,” said Farrell.

“We talked about creating our energy, our own atmosphere. All that comes from your work ethic, your want to try to get the ball back.

“I thought that was fantastic, our line speed was great; it was just a little disappointing to let them score that try at the end.

“The bigger picture stuff is to get some meaning into next week. And we’ve certainly managed to do that.

“That’s a big old ask to go to Paris and win and obviously the French have a fantastic squad. It’s always an unbelievable task to go and win there, but we’ve started our campaign again and we’ve taken ourselves into next week with a chance.

“We’ve got a lot to fix up but it brings a bit of excitement into next week for us as well.”

So who's going to be lifting the #GuinnessSixNations trophy on Super Saturday then? 🤔 pic.twitter.com/SQEPs4DcYr

“Hugo and Will, their work ethic was fabulous. It’s only what we would expect of them, what we’ve seen them do week in, week out.”

“Now the young guys know what Test match rugby is all about,” said Smith. “That experience will stand them in good stead.

“Garbisi handled the pressure well, and kept himself in the game.

“Any other youngster would maybe have lost track but he kept his wits. He didn’t lose his way or his nerve, he organised the game reasonably well.

“And he was also physical as well. So I think I’m satisfied and I’m sure he can grow from there.”