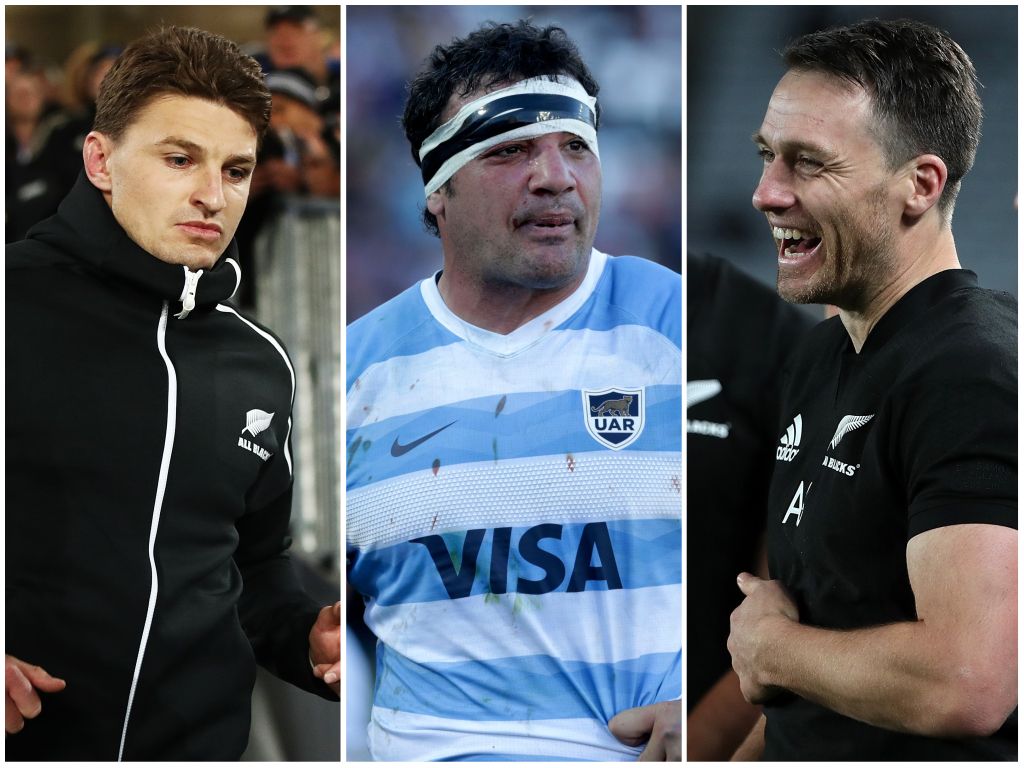 With the dust having settled on Round Two of the Rugby Championship, we’ve gone through the action to pick the best players from the weekend.

Although New Zealand were impressive again, Argentina lead the way with seven representatives in our team after ending their 11-match losing streak with a win over against South Africa in Mendoza.

The All Blacks are still well represented with six players while the Springboks and Wallabies also contribute one player apiece.

15 Jordie Barrett (New Zealand): Dane Haylett-Petty was one of the few to show up well for Australia but Barrett impressed in what was a slicker performance by the All Blacks. Once again they struggled slightly in the first half, but two moments of quality – one of which involved the full-back – saw the world champions go into the break 14-7 ahead. They then dominated the second period and the Hurricanes man was part of that as he filled in superbly for Ben Smith, who moved to the wing in Rieko Ioane’s absence.

14 Bautista Delguy (Argentina): Scored two tries and finished both excellently as los Pumas completely dominated the first half against South Africa in Mendoza. The wing has impressed for the Jaguares in Super Rugby and continued that form here, making 63 metres with ball in hand and beating an outstanding 10 defenders in the Argentinians’ 32-19 triumph. At the age of just 21, the youngster is looking like an excellent find for Mario Ledesma.

13 Matias Moroni (Argentina): Arguably one of his best performances in an Argentinian shirt, Moroni had a significant hand in three of the tries, providing the final pass each time. The centre linked with Delguy and Sanchez in the first half while his third assist saw Ramiro Moyano touch down for the game-clinching effort. Elsewhere, Jack Goodhue once again impressed for the All Blacks but we’ve gone with the los Pumas back, who was in top form.

12 Ngani Laumape (New Zealand): Not a massive amount of competition for this position with Laumape clearly the best without being a standout in the All Blacks’ victory on Saturday. Kurtley Beale did some decent things once again but the centre is not really getting enough space to work his magic. Laumape, meanwhile, was regularly involved, making 81 metres from 16 runs with a number of those carrying into heavy traffic. He is an absolute powerhouse and offers a different option to Ryan Crotty, but is no less effective.

11 Ben Smith (New Zealand): Two wingers shone this weekend but both played on the right so we have moved the Highlanders back across to the left. After being named in the XV last week following his performance at full-back, Smith showed his versatility by being equally as effective in the wide channels. His excellent take from Aaron Smith’s box-kick was crucial in the first Beauden Barrett try while the 32-year-old also had a significant hand in two of the fly-half’s other scores.

10 Beauden Barrett (New Zealand): Any doubts about whether Barrett is the number one fly-half in New Zealand (or the world for that matter) were all but dispelled after a virtuoso performance from the brilliant number 10. Four tries for a record-breaking haul of 30 points set up an emphatic 40-12 victory to retain the Bledisloe Cup. Meanwhile, Nicolas Sanchez continued his fine form as he marshalled the Argentine attack superbly against the Springboks and contributed 17 points, including a try and drop-goal.

9 Gonzalo Bertranou (Argentina): His crisp service and astute decision-making were crucial in allowing Sanchez to flourish outside of him, while the nuggety scrum-half was not afraid to get involved on defence either, making nine tackles. Comes in ahead of the All Blacks’ Aaron Smith, who came out on top in the personal duel with Will Genia for the second successive week.

8 David Pocock (Australia): Another admirably brave performance as he was heavily targeted by the All Blacks. Immense at the breakdown and on defence, making a team-high 18 tackles, while his turnover would have led to a try on the stroke of half-time were it not for Kurtley Beale’s knock on. Was a miracle he managed to stay on the field after taking all those knocks and neck rolls. Beats out opposite number on the day All Blacks captain Kieran Read and Argentina’s Javier Ortega Desio.

7 Marcos Kremer (Argentina): The highly-rated, versatile forward played most of his early rugby at lock for the Jaguares but has shone as a loose forward this year for the Buenos Aires-based franchise and at international level. And this positional shifts appears to be a masterstroke as Kremer offers a size advantage and an excellent ball-carrying option. Busy as ever on defence, Kremer made a team-high 19 tackles and edges out Sam Cane, who probably would have made our team had he not left the field with a head knock with 25 minutes remaining.

6 Siya Kolisi (South Africa): The skipper was by far his side’s most potent weapon on attack and is the only Springbok in our side. Made some typically barnstorming carries as he beat seven defenders on the day and scored a superb individual effort. Made up for being the smallest loose forward on the pitch with wonderful acceleration off the mark. Comes in ahead of the All Blacks’ Liam Squire and Wallabies’ Lukhan Tui.

5 Guido Petti (Argentina): Was one of Argentina’s heroes in that memorable victory over South Africa in Mendoza. Petti stood up well to the Springboks’ physicality and took the fight to his opponents with some strong carries. Also did well in the lineouts and was particularly impressive on defence with 15 tackles. Meanwhile, Australia’s Adam Coleman played well in a losing cause in Auckland.

4 Brodie Retallick (New Zealand): Another super all-round performance from Retallick, who continued where he left off in Sydney last week. Was once again one of the All Blacks’ best players as they put the Wallabies to the sword again. Retallick’s lineout work was impressive and he was a willing ball carrier but it was his defensive work which caught the eye in Auckland. Eventually made 11 hits of which two stood out as he also ripped the ball from the ball carrier while making the tackle.

3 Juan Figallo (Argentina): The Saracens stalwart delivered a dominant scrummaging display which is no mean feat as his direct opponent was one of the world’s best loosehead props in veteran Springbok Tendai “Beast” Mtawarira. Figallo’s prowess in the scrums was impressive and on one occasion his dominance over Mtawarira laid the platform for one of Bautista Delguy’s tries. Figallo also shone on defence with 10 tackles and beats out All Black centurion Owen Franks.

2 Agustin Creevy (Argentina): Los Pumas‘ skipper put in an inspirational performance and shed blood for the cause in his side’s excellent triumph against the Springboks. Creevy was solid as a ball carrier especially at close quarters where he gained 18 metres from seven runs. Also came to the fore with a brilliant defensive effort and finished with 18 hits while his leadership also stood out. Codie Taylor of New Zealand was next best.

1 Joe Moody (New Zealand): Moody makes our team for the second successive week after another fine showing at the coalface of the world champions’ forward effort against the Wallabies. As usual, he was solid in the scrums but also did well on attack and was rewarded with a try for his efforts. Also did his bit on defence with eight tackles and comes in ahead of Nahuel Tetaz Chaparro of Argentina.

Team of the Week
ADVERTISING