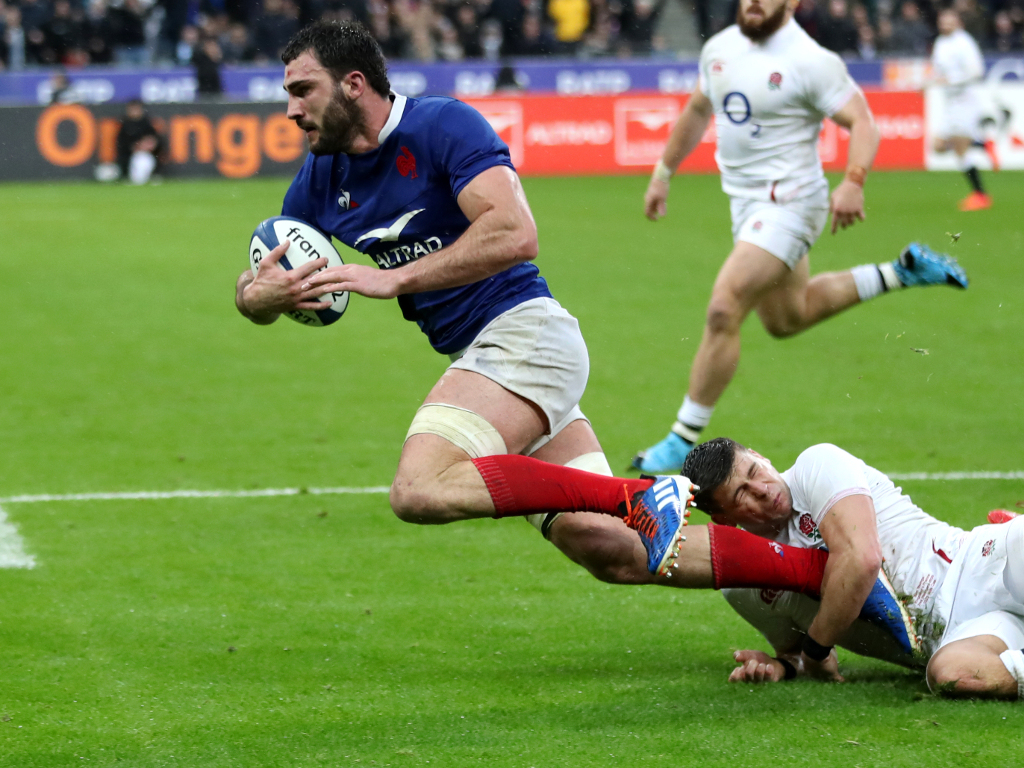 France’s new era under head coach Fabien Galthie got off to an impressive start as they saw off bitter rivals England 24-17 in their opening Six Nations match at the Stade de France on Sunday.

Jonny May’s solo masterclass saved England from humiliation in Paris as one of the worst performances of the Eddie Jones era ended in a defeat that puts a large dent in their title ambitions.

Jones had promised France “brutal physicality” but instead it was his rattled World Cup runners-up who fell victim to a ferocious onslaught as words that had caused controversy on this side of The Channel came back to haunt him.

Les Bleus stormed 24-0 ahead when captain Charles Ollivon ran in the second of his two tries in the 55th minute and that was the cue for May to conjure a pair of devastating solo tries.

For the second he beat five defenders while plotting a diagonal line to the posts in a score made possible by his extraordinary pace.

May’s brilliance provided temporary inspiration but England lacked the firepower to make further inroads into the deficit in an improved final quarter they controlled and that finished with Owen Farrell landing a penalty to claim the bonus point.

A rain-swept Stade de France noisily greeted the new era launched by their head coach Galthie and the influence of his assistant Shaun Edwards was stamped all over the defensive heroics.

England, meanwhile, will lick their wounds as they come to terms with the possibility their World Cup final rout by South Africa last autumn may have left deeper scars than initially expected.

For the first time since 1988 they were held scoreless at the interval in a Championship match and it is hard to imagine a worse start as they were breached in the sixth minute by Vincent Rattez.

Once an initial attack had collapsed through Kyle Sinckler’s knock-on, Teddy Thomas stormed into the 22 after skilfully evading Sam Underhill and Rattez took advantage of a weak tackle by Ben Youngs to slip over.

England’s scrum ascendancy offered a foothold in the game but otherwise they were being beaten at every turn in an alarming opening quarter that deteriorated further when Romain Ntamack added a penalty to his conversion.

Manu Tuilagi left the field in the 16th minute, although there was no obvious sign of injury, and soon after France went over for a controversial second try through Ollivon.

Ollivon challenged for a kick and it was unclear whether its struck him or Courtney Lawes before falling to Rattez who sped forward before supplying his openside with the scoring pass.

England disputed the try, saying the ball had hit Ollivon’s arm, but referee Nigel Owens disagreed and they only had themselves to blame as they stopped playing in anticipation of the decision that went ultimately went against them.

Underhill was smashed backwards in the tackle, George Furbank’s shaky debut continued with another knock-on, Sinckler split forward and then Farrell snatched clumsily at a pass as errors compounded at a ferocious rate.

It was making attack an impossibility and the cascade of mistakes continued as Youngs ended a promising spell by being penalised for holding on before a needless free-kick was conceded at a line-out.

Jones questioned at the start of the week how France’s young team would cope with the pressure, but it was his players who looked powerless as events unfolded around them.

The second half started with a sustained onslaught on the French line that almost saw Maro Itoje go over but the defence held firm.

Pressure continued to build on the home whitewash, however, with Jonathan Joseph almost slipping over only to be stripped of the ball by Virimi Vakatawa.

With the immediate danger averted, France rallied superbly and when Antoine Dupont raced free on the outside to evade Youngs, Ollivon arrived in support to score their third try.

Owens spoke to both captains after a large fight broke out in the wake of the touch down and England were finally off the mark when May beat Thomas to his own grubber.

Better yet was to come from May as he switched on the afterburners to leave a trail of French defenders in his wake for his second, setting up a nervy climax to the afternoon.

George Kruis almost forced his way over under the posts and England continued their assault on the line, but apart from a stoppage-time penalty by Farrell that secured the bonus point, France kept them out.