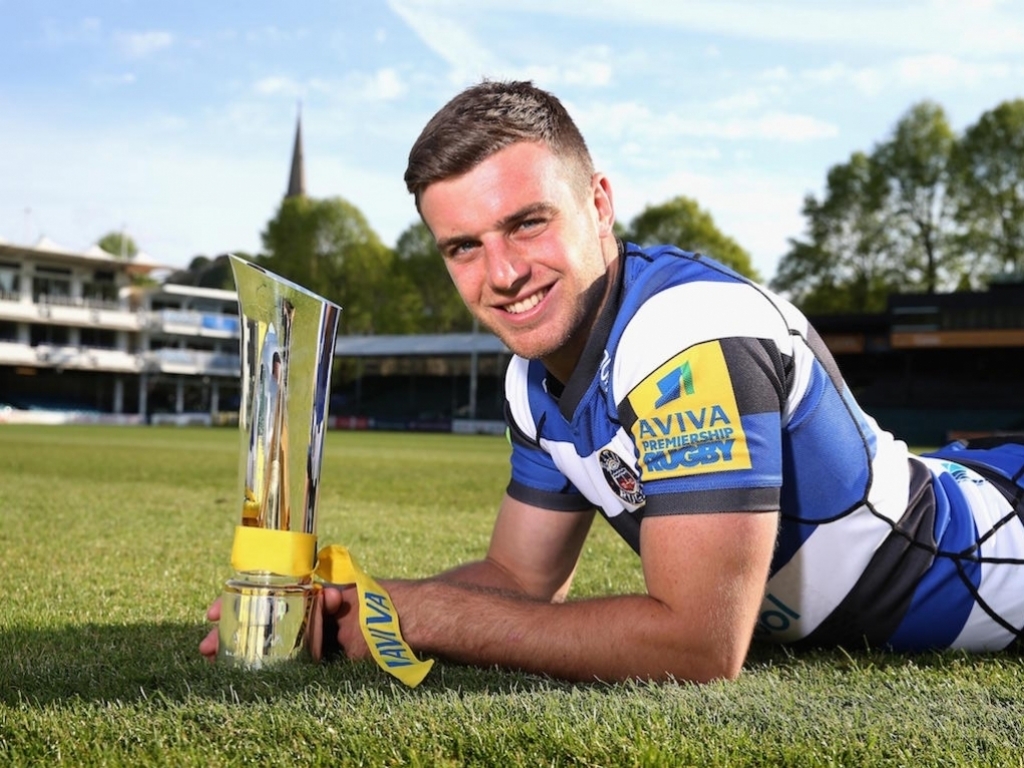 George Ford was named Premiership Rugby Player of the Season at a glittering ceremony in central London on Wednesday.

The Bath fly-half has enjoyed a stellar season for both club and country as Bath have made the Premiership Rugby semi-finals for the first time since 2010.

"There is no doubt he has spear-headed an extremely talented back-line at Bath Rugby and his control and composure at fly-half show a remarkable maturity for someone so young.

"Having graduated through the Leicester Tigers Academy and becoming the youngest player to make his professional debut in the Premiership he went on to become the first Englishman to claim the IRB Young Player of the Year award.

"This season he has now cemented his position in the England team and I'm sure we all hope he can take his fantastic form from this season into this year's Rugby World Cup.”

One of only five 17-year-olds ever to have played Premiership rugby when he made his debut in 2010, Ford was marked out for success from a very early age, establishing himself in the England team this season.

His career has been building for some time. He won the Premiership A League with Leicester in 2010 and 2011, the LV= Cup in 2012 and the Premiership title with Tigers in 2013.

At 24, Ford's club colleague Jonathan Joseph was the oldest player on the shortlist.

On an incredible night for the Ford family, George's father Mike Ford was named Guinness Director of Rugby of the Season after taking Bath to a home Premiership Rugby semi-final this Saturday against Leicester Tigers and an unforgettable European campaign that brought a European Champions Cup quarter-final.

A former rugby league international Ford joined Bath in 2012. Ford's knowledge of the game has been utilised to great success at international level with Ireland, England and the 2005 British and Irish Lions – the midweek side he coached who went unbeaten in New Zealand.

His first head coach role in the Premiership was in the 2005-06 season with Saracens, and his impressive coaching achievements are matched by his former career as a rugby league player. Ford has represented Great Britain Rugby League and is an inductee in the Castleford Tigers Hall of Fame.

On a night when many young players took centre stage the Land Rover Discovery of the Season award, for the best Under-23 player in the league went to Exeter Chiefs' Henry Slade.

Slade has emerged from an incredible Premiership season that saw him become one of only three players (all from Exeter) to have started in all 22 rounds this season.

"Henry Slade is an exciting and special talent who is a key factor in Exeter Chiefs drive to be a regular top six Premiership club,” said Mike Hynard, Premiership Rugby's Head of Academies and Development.

"Henry has developed a fantastic all round game that makes him effective at 10, 12 and 13. He is a real threat in attack and has the ability to put players around him into space. I look forward to seeing him make an even greater impact in Premiership Rugby next season and push for international recognition.”

He followed this up in 2014 by helping the Chiefs to their LV= Cup victory and scored 27 points for Exeter v Harlequins at the Twickenham Stoop on February equalling Gareth Steenson's Premiership record for the club.

The first award of the night at the Park Lane Hilton went to Saracens hooker Jamie George who was named Aviva Community Player of the Season, an honour which celebrates players' involvement in their club's community foundations and their work with a variety of other charities.

Premiership Rugby Community and CSR Director Wayne Morris insists that this year's shortlist is evidence of the continuing work done by the league's players in providing a positive impact in local communities.

"We are lucky to have over 600 players who act as great role models and ambassadors within our community work,” Morris said.

"The five guys who have been shortlisted for the award are fantastic examples of players who are helping make a real difference for people in the community.

"The commitment shown by all is brilliant, but these five have gone above and beyond – they have fully engaged in their club's community work, but they have also become involved with local charities associated with their clubs.

"With the players assisting in the work of 140 community development staff and numerous volunteers across more than 90 national and local programmes, Premiership Rugby is able to reach in excess of 310,000 young people every year.

"Jamie George has become a trustee of the Saracens foundation, while Dan Murphy and Dom Waldouck have donated their time to supporting local charities associated with their clubs.”

Following George was Wasps number Nathan Hughes who was won the Green Flag Forward of the Season title.

A panel of judges, aided by the statistics from our partners Opta, were asked to run their rule over those who have excelled from the packs at the 12 Aviva Premiership Rugby matches.

Only forwards who played 10 or more matches in the Aviva Premiership Rugby season were eligible and the following shortlist was created of five players, representing four different clubs.

The judging panel included Rugby World Cup winner Neil Back who said: "More than a dozen impressive contenders emerged from our deliberations and it was tough to get down to these five.”

Hughes wasn't the only Wasps player to be honoured at the awards as his club colleague Joe Simpson won the Citizen Try of the Season gong.

In a season that has seen a staggering 693 tries – the highest tally since 2000 – including a record 13 hat-tricks, Simpson's stunning score against Exeter Chiefs from inside his own half emerged as the winner.

Premiership Rugby has also moved over the significant five tries per match threshold for the first time since the 1999-2000 season making the job of selecting the shortlist and winner for the Citizen Try of the Season even harder.

Simpson took the plaudits for his solo effort but it was one of his opponents on that day at the Ricoh who claimed the Trivento Top Try Scorer Award.

The Exeter Chief may have crossed the line more often than any other player in Aviva Premiership Rugby but when it came to points from the boot Wasps outside-half Andy Goode was a cut above the rest.

Goode who broke the Premiership Rugby record for points in a game with 33 against London Irish as he went on to lift the Gilbert Golden Boot Award, also becoming the first player to be the top points scorer for the third time, previously winning the award in 2003-04 and 2004-05.

One of the most-eagerly awaited Awards was handed out by former England international Martin Bayfield and his BT Sport colleague Alastair Eykyn, the BT Sport Aviva Premiership Rugby Dream Team: