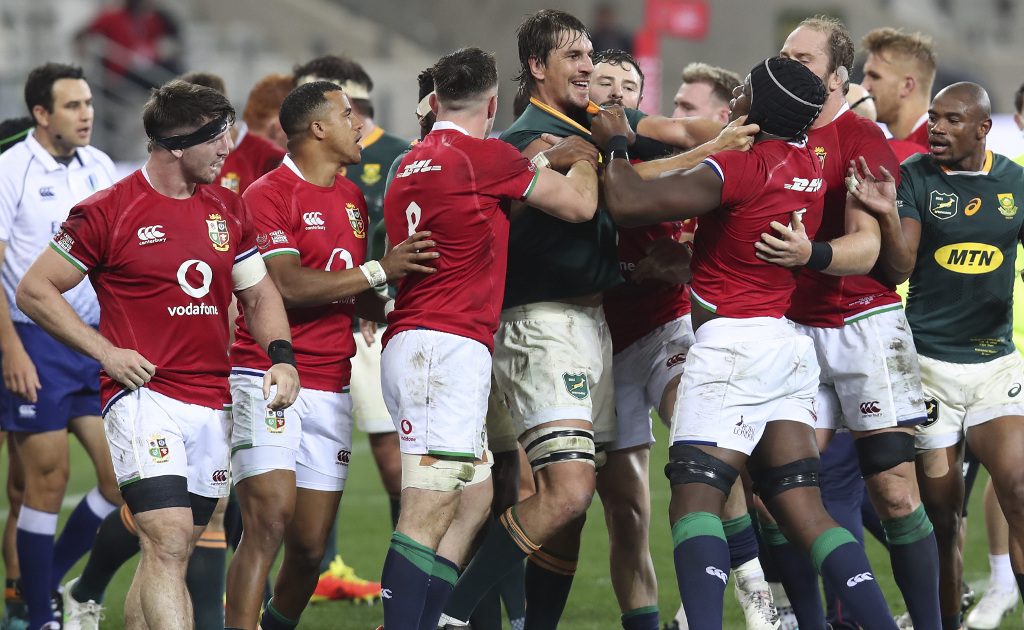 The British and Irish Lions and South Africa face off for the final time on the 2021 tour as both sides battle for series bragging rights.

Here’s five talking points heading to the final Test at Cape Town Stadium on Saturday as passions are set to boil over in this huge game.

One of the most toxic Lions tours in history reaches its climax on Saturday, but there is still time for the rivals to rescue it from infamy by delivering a captivating finish to dispel some of the apathy generated by a dull second Test. Warren Gatland and Rassie Erasmus have locked horns verbally and the spectacle on the pitch has been no less ugly. Erasmus, South Africa’s director of rugby, has emerged as the real villain of the series, however, and his online attacks on the refereeing will leave a bad taste that will linger for some time to come regardless of the outcome.

Even purists were reaching for the off button on their remotes in response to the endless kicking and trench warfare blighting the second instalment of the series. The Lions have contributed to the deficit of entertainment, but South Africa are the chief culprits with a suffocating style that sucks all joy from the game. Their former boss Peter de Villiers recently described it as “very, very boring” and Gatland has implored Saturday’s officials to stop the Springboks using the likes of injuries, cramp and stud changes to slow down the game, robbing the Lions of the chance to play with tempo and benefit from their superior conditioning.

A roll of the dice

The majority of Gatland’s changes reinforce the existing game plan of setting out to match South Africa physically, but with the hope they will have greater success after being dismantled in the second-half of the last Test. Wyn Jones and Ken Owens will provide more ballast in the scrum while another Welsh duo in Liam Williams and Josh Adams will add aerial prowess to the back three, and in midfield Bundee Aki will supply muscle both sides of the ball. But it is selection of Ali Price at scrum-half and Finn Russell and Sam Simmonds on the bench that points to the Lions’ hope that there will be opportunities to play. Scotland magician Russell, in particular, will shoulder the responsibility of providing the magic needed to unlock the game’s most ferocious defence.

How will South Africa adapt to the loss of two of their most influential players? Scrum-half Faf de Klerk and flanker Pieter-Steph du Toit have been lost to injuries sustained in the second Test and their absence is a significant boost to the Lions. De Klerk is the Springboks’ dynamo, irrepressible and at the heart of their kicking game, while the towering Du Toit is relentlessly physical at blindside flanker. Cobus Reinach will provide more of a running threat than De Klerk, while Lood de Jager’s promotion into the pack will offer superior mauling clout, but the hosts will still feel the loss of two of their world-class players keenly.

Gatland will send his players into one of the biggest games of their careers with strict orders to avoid any niggle. “We got a little bit embroiled in the pushing and shoving and we need to stay away from that,” he said. It is remarkable that only Kyle Sinckler was cited from a stormy second Test that produced a host of flashpoints and while it is South Africa whose fearsome reputation precedes them, the Lions contributed fully to the catalogue of incidents that kept the officials busy. If they are to prevail, the tourists must stay composed.