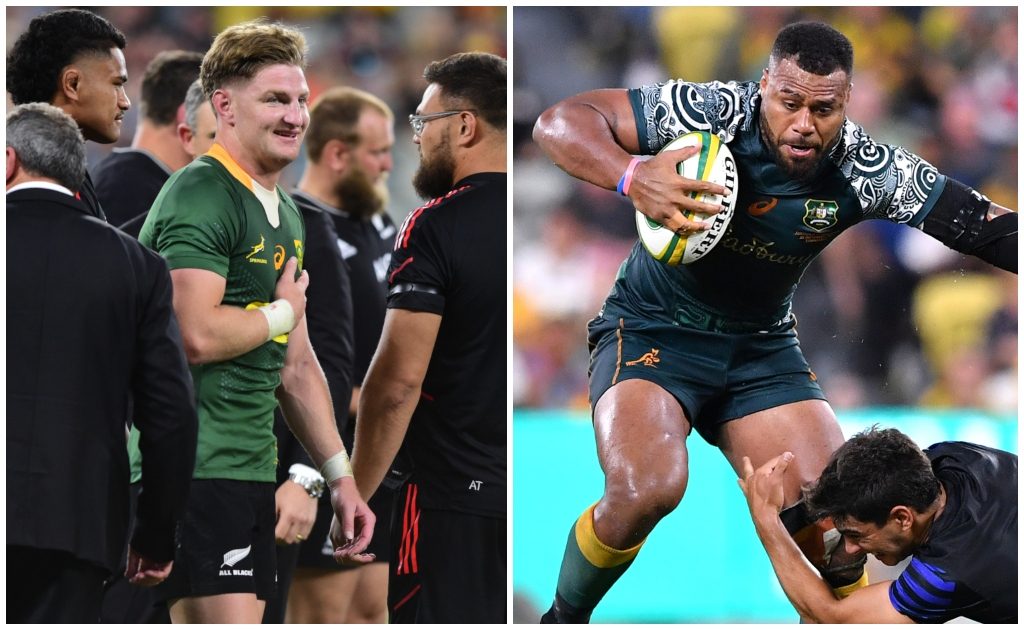 Following the victories sealed by New Zealand over South Africa and Australia over Argentina, here’s our five takeaways from the Rugby Championship round.

Suffocating, intense, physical and gladiatorial, the 100th Test between South Africa and New Zealand lived up to its billing and delivered a high intensity and brutal match.

The lead swung like a pendulum all evening, as two heavyweights rumbled in the humidity of the magnificent Townsville Community Dtadium, with absolutely no quarter given until Jordie Barrett nailed a 45 metre penalty in the last five minutes of the game.

For the purist, the micro-battles were sensational, none more so than the tussle of the opensides, where Siya Kolisi, our Player of the Match, and Ethan Blackadder, had a personal contest that was absolutely delicious and almost undecided after 80 minutes. Elsewhere, the directness of Damian de Allende contrasted brilliantly with the speed and elusiveness of David Havili and, at the back, Jordie Barrett went a long way to nullifying the Bok aerial tactics and his contribution was immense.

In the final analysis, whilst South Africa were brilliantly disruptive and executed their plan well, there was always a feeling that New Zealand had just an ounce more fuel in their tank and whilst it was a close run thing, they probably just deserved their victory.

One small point to make – with a population of 200,000, and an attendance of 30,000, 15% of the population/visitors to Townsville were at the game tonight – a real testimony of the success of holding these series of matches as double headers in Australia.

New Zealand learned a lot in this game; their ability to soak up pressure will please them, but the lack of ability to convert a lot of opportunities they’d normally have run in was due to the immense pressure of the Bok rush defence. They missed Richie Mo’unga hugely at fly-half and at times, Beauden Barrett’s ‘instinctive’ style of play removed the structure needed to maintain phase attack and to minimise defensive numbers.

They learned that their set-piece maybe is not quite as good as they have believed. Joe Moody struggled greatly with the height of the scrum and at the lineout, only the outstanding Blackadder was a risk free option for them. In contact, some of their ball retention in the face of crushing defence defied belief at times, with the exception of Akira Ioane, who let his side down on a number of occasions with hard hands.

But above all, they learned they can win ugly and they can overcome pure brute physicality. This is a lesson that will please Ian Foster most of all – there’s no doubt about the attacking capability of New Zealand but hanging in against sheer power was something that they needed to test – and in the final analysis, they came through.

There was a lot of good things in the South African performance. On the openside, Kolisi was magnificent, putting in an almost superhuman display to silence his many domestic critics. His blindside cohort, Kwagga Smith, showed just why a small man has succeeded in the land of the giants, as he was a nuisance all evening, putting in carries and hits that make a mockery of those that believe he’s too small.

However, discipline was a big issue for them; Luke Pearce is a meticulously accurate referee and again, his interpretations of the tackle contest was precisely what World Rugby want to see and time and time again, the Springboks turned over possession due to inaccuracy, something that will concern them greatly.

They’ll also know they need to do far more in midfield than they’re currently managing. They’ve always subscribed to the view that if Plan A fails, then they employ Plan A but better. Sides are wisening up to that, they’re using three at the back to counter the kick and chase, and when there’s full-backs as commanding as Jordie Barrett around, they simply must learn to use the blistering pace they have on the wings by keeping the ball in hand.

For a number of years, their midfield combination of Handre Pollard, Lukhanyo Am and De Allende has been considered match-winning but the lack of creative ambition within those players is now hampering their ability to beat the best. It’s a case of fine tuning, not revolution, but right now, they need to change something in that trio that have served them so well.

For all of Australia’s moment in the sun last week, this was a game that showed their emergence as a world class side. Argentina were in parts extremely competitive and it’s only their indiscipline and lack of direct control in midfield that is undermining the efforts of their immense forward pack.

The understanding and speed of the Aussie 9/10/12 combination is the engine room of their game. Nic White’s speed of service from the base is exceptional – no lift passing, no stepping – just fast accurate delivery. At 10, Quade Cooper is bringing the best out of Samu Kerevi, who must be currently the most feared centre in world rugby. Cooper’s touches are quick, intelligent and allow Kerevi and others space to gather momentum and to take options. That spine of the Wallaby back division is as good as any in the world right now, fusing creativity, pace and power in equal measure.

Up front, they’ll be concerned at a number of daft technical penalties they continue to concede. Had they remained legal at lineout time and at contact, Argentina would have struggled to stay with them, but time and time again, they gave Los Pumas easy outs or territory that was unnecessary due to inaccuracy.

Nevertheless, Dave Rennie’s influence on this side is clear; together with Scott Wisemantel, he’s produced a side of depth, pace and high intelligence. Australia are on the upslope and they’ll continue to improve, just at the right time to make them genuine contenders for the 2023 Rugby World Cup.

Nothing sums up Argentina more than the performance today of Marcos Kremer. For most of the game, he was brilliant, huge in carry, massive in defence. However, the moment he gets his side onto the front foot, so a litany of juvenile penalties and a daft yellow card follow, almost as if the sheer adrenaline of doing good work carries him to a zone of over-enthusiasm.

Argentina had the possession and field position to hurt Australia a lot more than they did in this match. They enjoyed go forward, they dented a powerful Wallaby defence and they did 90% of things well. But as to the rest, it was absolutely comedic, with penalties conceded that you’d expect only from an U12 side. And what’s worse is that they make the same errors time and time again.

They need to fix this indiscipline and then find someone who can slow the adrenaline rushes down in midfield and calmly use the possession they get and finish off the chances they make.

Right now, they’re a decent side who can beat good ones on their day; their challenge is to become a good side that can beat anyone on their day and it’s frustrating to watch them continually plateauing and making the same errors every time they take the field.