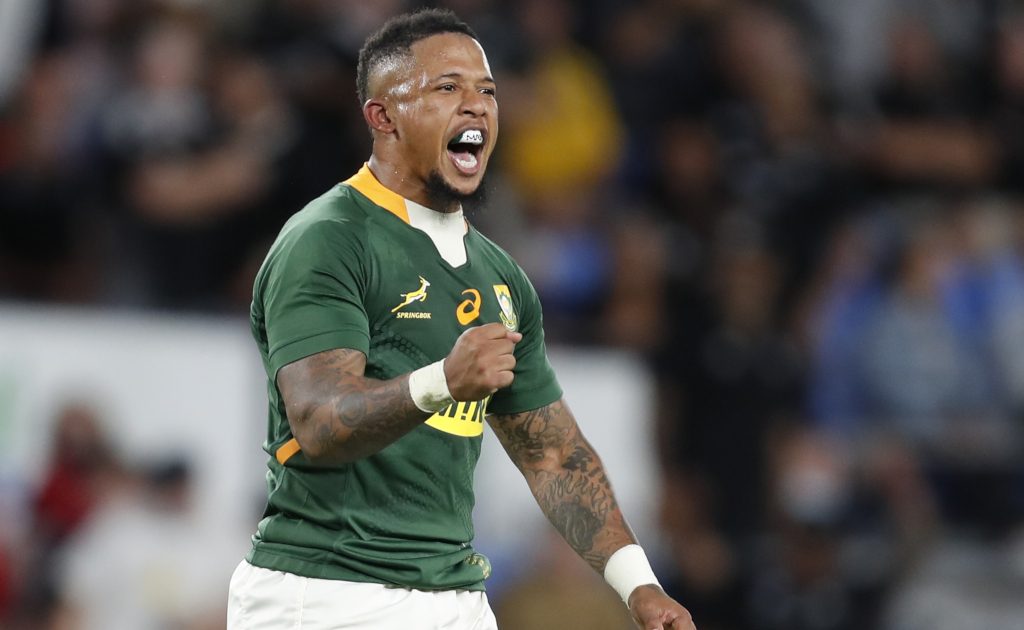 Following the victories sealed by South Africa over New Zealand and Australia over Argentina, here’s our five takeaways from the Rugby Championship round.

This was one of the finest Test matches witnessed in recent times; a gladiatorial battle of momentum swings, fine margins and lead changes that saw South Africa kick an injury time penalty to beat New Zealand 31-29.

The last time the Springboks beat the All Blacks when behind at half-time was 1998 and that statistic underlines the enormity of their win. It’s become a popular cliché to suggest SA have only two plans – Plan A and a Plan A – but this was more like Plan A+ as they managed far more pace and intensity than they’ve been able to find for the last six Tests.

It was all about an uplift of pace, whether that be in hand, in clearing out or on the ball itself and it’s clear that, as their fitness has increased, so they’ve been able to finally find the performance levels they produced when they became world champions two short years ago.

A wonderful symphony also needs a great orchestrator and the man in the middle, Matt Carley, again underlined the quality of officials that England are producing, as he delivered a calm and concise display that enabled the players to respond to his direction.

New Zealand will be remembered as the 2021 Rugby Championship winners, but the gap between the big three in the southern hemisphere is tiny – on their day, any team can beat any other and it’s credit to the All Blacks they managed to find a way to win just a few more times than their competition.

All in all, a wonderful end to the Australia-hosted ‘Festival of Rugby’ and a Test match that will be remembered as up there with one of the best.

At the centre of the South African display was their power and pace at the breakdown.

Controlled, clever and aggressive, they were supreme in pressuring New Zealand into simple errors. Whilst Kwagga Smith is no oil painting, his work around the rucks and contact area is an art form, and his display fully justified the South African decision to go for a smaller and more mobile flank. He was absolutely everywhere, turning everything into a contest and allowing freedom to his other back-row partners, Duane Vermeulen and Siya Kolisi, to strut their carrying stuff.

Their replacement strategy also paid dividends, with an early front-row change followed by some immense contributions from old-timer Francois Steyn and the mercurial Elton Jantjies, the former providing some good old fashioned field position with some enormous kicking moments.

The Springboks have finally managed to find a blueprint to return to winning ways, but in order to move forward from this series, they need to start to look at how they’re going to fill the boots of some of the older players; will Vermeulen and Steyn realistically make another World Cup? They may, but in order to do so they’ll require detailed physical management and we’ve already seen that their replacements are not near the level these old timers are at.

When they look back at this campaign, it will be with mixed feelings; immense pride at their performance in Round Six, but huge frustration at the close losses that were characterised by poor tee kicking and sluggish rugby.

Nevertheless, the world champions now move up to tour Europe with their pride intact and their plan in place. They’ll be a tough prospect for any side they face this coming November.

Today showed us that whilst New Zealand are a mercurial side, with the ability to finish off moves that others can only dream of, they are still a work in progress.

Their back-row today lacked the craftsmanship of the Bokke, despite an immense display from skipper Ardie Savea. The omission of Ethan Blackadder from the starting line up was an error – his intensity at the breakdown and his dark arts work gives the balance that New Zealand need between skill and sweat in their loose trio, and it’s almost certain that he’ll become a fixture in the All Black back-row during their northern hemisphere tour.

At 10, Beauden Barrett is a magician, but unfortunately you’re never quite sure if you’re going to get Tommy Cooper or David Copperfield. There’s no doubt about his brilliant ability to ignite attack, but on today’s head to head, Handre Pollard’s match control was far superior. In the backline, the combination of Anton Lienert-Brown and David Havili just didn’t work, the two very similar players lacking the contrast needed to make an effective centre partnership. To compound matters, with Barrett at 10, you need a technical centre, someone like a Conrad Smith or Aaron Mauger who plays percentages and has both hand and foot counterpoint to keep good defences guessing.

However, by saying this, these are easy fixes and 2021 was always going to be the year that Ian Foster tried a few different options before he sorts his team for the 2023 World Cup. They emerge champions, they understand what they need to do to improve and you can bet your bottom dollar they’ll do it.

The Wallabies ended their hosting of the Rugby Championship with an emphatic 32-17 victory against Argentina, led by an exquisite display of fly-half control by Quade Cooper and finished in style with a hat-trick from the flying young wing, Andrew Kellaway.

Make no mistake about this, the turnaround in Wallaby fortunes this year has been engineered by the brilliant decision by Dave Rennie to recall Cooper – a man that is turning everything he touches to gold.

With a powerful and solid pack, Cooper’s ability to deliver the three man in to out pod attacking moves that Scott Wisemantel meticulously designs is opening up every defence they encounter. It’s a simple process: soft, deft passing, looping options combined with two supporting runners off either shoulder and an absolute emphasis on the ball carrier using an inside line to step in to create space for those outside him.

The waves of running Wallabies are queuing up to work off Cooper. Since his return, so many of the backs have flourished. Kellaway today, Samu Kerevi in the whole series and Marika Koroibete in previous games, and it’s no coincidence that it’s Quade that’s enabling Australia’s return to form.

Most of all, it’s a delight to watch. It’s rugby played with sleight of hand over power of shoulder and it’s a handling game played at pace and with skill. Not only are Australia on a winning trajectory, they have three or four world-class players to return to this side following the relaxation of the ‘Giteau Law’ and they’re also winning over a lot of friends with the manner they play. It’s an exciting time to be in the shirt of green and gold.

Ok, there was a little glimmer of attacking ambition and a couple of memorable close range tries from debutant Thomas Gallo, but bluntly, Argentina could play all night versus static tackle bags and still not create anything from their midfield simply because of the number of penalties their pack and breakdown players are conceding.

They’re becoming oh so predictable in their indiscipline – in this world of uncertainty, one of the few things you can rely upon is Thomas Lavanini collecting a card of either hue in a Test match. You can also be equally convinced that Argentina’s penalty count will top the 15 mark in virtually every game they play.

The litany of soft penalties they haemorrhaged tonight removed any form of momentum and control from their game and the sheer stupidity of some of their transgressions in a 19 penalty count was staggering.

Argentina have a high quality set of forwards, but these players are costing their team through blatant and obvious offending. The concern must be that this is now a cultural thing within their side; surely they understand the laws and surely they must recognise how soft some of their illegality is?

The rot must stop now. We can criticise their back play but when those players are continually hampered by the illegal work of their colleagues we will never find out what they are capable of.