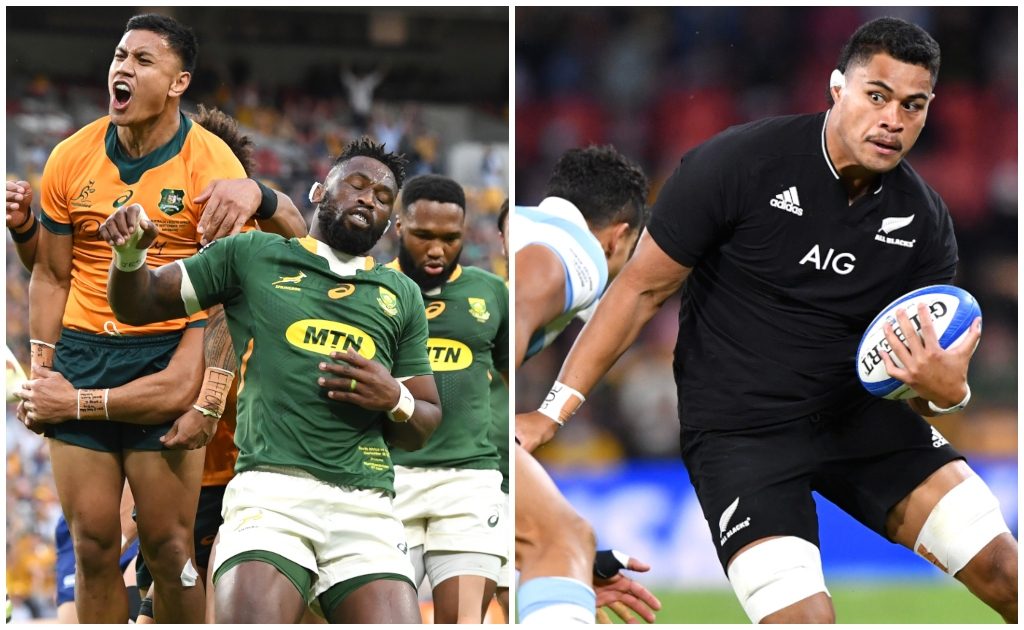 Following the victories sealed by Australia over South Africa and New Zealand over Argentina, here’s our five takeaways from the Rugby Championship round.

Whilst the victory on the Gold Coast a week ago against South Africa was one delivered by spirit, commitment and of the closest margins, this second win on Saturday was clear, concise and convincing.

Australia were absolutely magnificent, blending crushing maul defence with some real ambition in the backs, characterised by the out to in offloading game that Scott Wisemantel designs for any side he coaches.

Up front, impressive displays by Taniela Tupou, Matt Philip and the perpetual motion skipper, Michael Hooper, provided the platform for some deep attacking work, often started by Nic White and Quade Cooper and more often than not, finished by the physical running of Marika Koroibete, Samu Kerevi and the impressive newcomer, Len Ikitau.

Time and time again the Wallabies got around the fringes of the Bok rush defence through quick hands and the ability of their forwards to add extra numbers into the line. Rarely has the South Africa scramble defence been tested so extremely and so often, as the little offloads, inside passes and quick hands of the Wallaby backline picked holes in the Springbok blitz and allowed them to get around the outside of a narrow rush.

Make no mistake about it; this was an absolutely worthy win from Australia; nobody ever doubts their ability with ball in hand, but now they’ve refined both their set-piece and their carrying game, they look the complete package and are improving with every game they play.

For all the talk about the ability of the South African centres, they could have stayed out on the field in Brisbane until midnight and they’d probably not have been able to find the attacking spark to unlock the Wallaby defence.

Whilst their physicality is never in question, yet again, the passing and creativity needed to beat the best at Test level simply wasn’t there and at no point were they able to get around the fringes of the Australian defence in the manner their opponents did to them.

Faf de Klerk continues to be their shining light and his speed and precision masks a lot of the midfield deficiencies outside him, but once he left the pitch on the 68th minute mark, the Springboks looked absolutely shorn of any creative threat, to the point their power game simply became amplified whilst their running game was silenced.

Yes they might be physical behemoths; yes, they might be world champions in name, but right now they’re a long way away from matching the rugby completeness of either Australia or New Zealand.

The 23 we saw on the pitch on Saturday may be the core of the side that took them to their crown in 2019, but that was two long years ago and it’s now time for Jacques Nienaber to introduce new and more creative blood, especially in a back division that at times looked lacklustre and at others looked downright poor.

If you want to look at the mechanics of the Wallabies’ win then you need look only as far as their set-piece solidity, their maul defence and their ability to employ three-man attack pods to pass either side of the ball carrier.

Crucial to the maul defiance was the power of Tupou and Philip. When South Africa caught, Philip with Tupou and one other, formed a three-man driving pod to hit the catcher hard and legally as he came to ground, managing to wrap around that catcher before his support players arrived. It was a masterclass of thinking and execution and it removed the Springboks of their most potent weapon.

In attack, Australia have found a man in the mature version of Cooper that has time to scan and think before he passes. Put simply, the Queenslander had an extra second to spare with ball in hand compared to his opposite number Handre Pollard, and his ability to coax players to run on to his featherlight touches was absolutely crucial in three of Australia’s tries. The variety of movement in the midfield was quite sublime at times, with the carrier able to have options either side of him to create havoc as they were able to attack the secondary Bok defence on both sides of the ball.

If one thinks back to England’s win versus New Zealand in 2019, the very same out to in passes around the 15 metre line characterised that night in Japan and again, Wisemantel’s philosophy of having forwards running inside support lines to keep attacks alive paid dividends and he underlined his reputation as one of the world’s best attack coaches as his charges delivered his plan flawlessly.

In the second part of the Brisbane double header, New Zealand, tinkering with selection, overcame a doughty Los Pumas 36-13 with Tupou Vaa’i crossing for a brace of tries. However, if Argentina had the finishing ability of the wonderful All Blacks, they may well have pushed their illustrious opponents further, as they produced their best performance of this year’s Rugby Championship.

New Zealand did enough. Damian McKenzie underlined just how much depth they possess at fly-half and, most concerning for all the other Test nations, the scrum absolutely obliterated the Argentinean eight, often turning over possession at the set-piece through illegality.

🎯 the kick from Carreras

Right now, Argentina are a solid side on the verge of becoming a very good one. In Julian Montoya, they possess arguably the best hooker in the world, and in Marcos Kremer, Pablo Matera, Juan Martin Gonzalez and Guido Petti they possess four back five forwards that are as good as any in the game right now. The enormous Kremer in particular put in a huge shift, notching up 31 tackles and 14 carries and his improvement each week is clear to see.

Los Pumas’ forwards did a job that their backs were unable to finish off, but in the final analysis, New Zealand just had far too much in their locker to ever be under threat.

New Zealand learned one massive lesson in Brisbane; that young Ethan Blackadder is the link in their back-row that’s been missing since the retirement of the greats of Richie McCaw, Kieran Read and Jerome Kaino.

Blackadder is a tradesman; he is accurate, quick and intelligent, almost relentless in his mission to secure possession, to link with his backs and to sweep up any mess that’s made around ruck areas. Reminiscent of the great Richard Hill, his work is relentless, physical and accurate and his emergence just might allow the likes of Hoskins Sotutu and Ardie Savea, both of whom, despite their billings, have flattered to deceive at Test level thus far, to play their expansive games and to the flashy stuff whilst Blackadder delivers the dark arts around the breakdown.

For two years now, the All Black back-row has looked unbalanced, full of flash but lacking in grit. With Blackadder putting in such impressive performances back to back, he looks certain to have nailed down the blindside shirt for a few Tests to come and he’ll add that much needed abrasion that has been missing for a couple of seasons now.

Elsewhere, Ian Foster will be most pleased about the shape of the backline in attack. Time and time again McKenzie’s directness and ability to realign inwards gave the men outside him space to run. It’s an intuitive thing for Kiwis, but their ability to take a ball and step in so as not to strangle the space for the outside runners is a hallmark of great All Black play and on Saturday, the speed and straightness of the second wave runners was a delight to see and reminiscent of the great days of 2015.

New Zealand may not have been at their best, but factor in the running angles they’re demonstrating, their dominance at the scrum and the emergence of Blackadder as a Test starter and you can be assured that the All Black coaches will consider this to be a good day at the office.