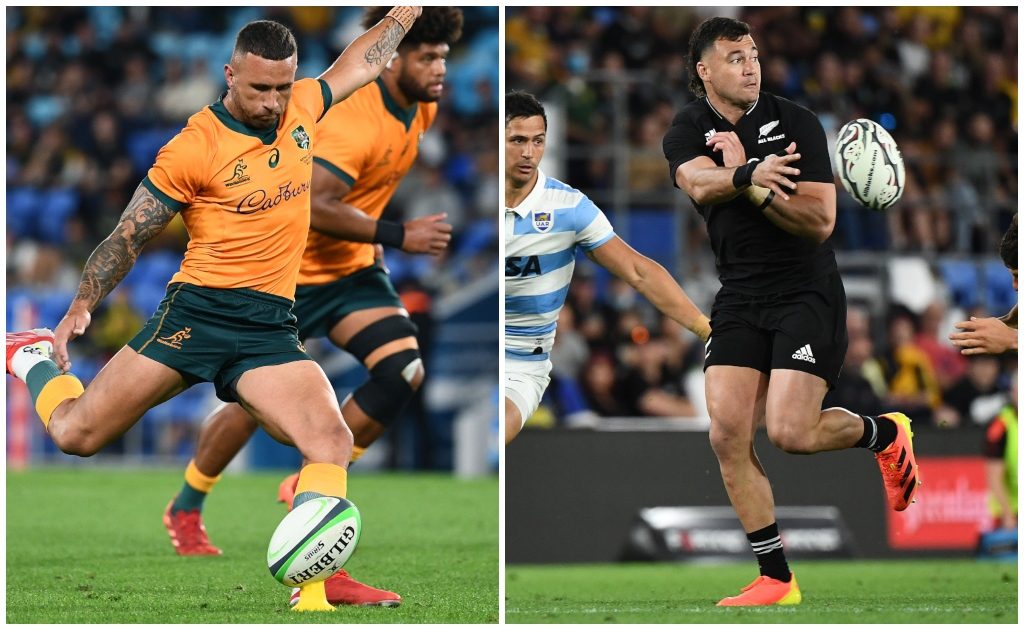 Following the victories sealed by New Zealand over Argentina and Australia over South Africa, here’s our five takeaways from the Rugby Championship round.

In the headline clash between Australia and South Africa, this was supposed to be all about the return to Test rugby of the great Springbok number eight Duane Vermeulen, who produced a thunderous display from the back of the scrum to remind us all of his immense class.

However, quietly in the Wallaby ranks, Quade Cooper played his first game in the gold shirt for four years and on the night, he absolutely eclipsed his more notorious opponent, producing a masterful display at fly-half that saw Australia sneak a famous victory in the last kick of the game.

Either side of Cooper, he was supported by two brilliant half-back performances from Tate McDermott and veteran Nic White, one in each half, with Samu Kerevi putting in a brutal display of direct running at 12 that reminded everyone that he’s still at least the equal of any centre in world rugby.

To beat the Springboks, you have to match them up front and Australia did exactly that, gaining at least parity at scrum-time and putting immense pressure on their lineout, where Lachie Swinton and Rob Valetini produced two of the bigger displays of their young careers, with Matt Philip, despite a yellow card, also having a night to remember.

For the rugby world at large, to see the Wallabies, always loved for their attractive and intuitive handling, matching the mighty Springboks (and at times beating them) in the set-piece will be a scary prospect – this young Australian side is work in progress under Dave Rennie and today, they made a massive stride in the right direction.

The last word was left to Cooper and his last gasp 45 metre penalty goal; it was a sensational ending to a superb Test match, and it was an apt end to a breath-taking night of high quality rugby from all four teams in Brisbane.

To witness something approaching the All Black reserve side take on an outfit as capable as Argentina with such ruthless ease was somewhat scary. For other nations, selection is a case of picking your best players and building a game-plan around them; for the All Blacks it’s more so they design a game-plan and pick the best players to deliver it – a somewhat different approach.

The manner the players react with such speed and rugby intellect is a joy to see and within seconds, they can transform a defensive set on their own line to a try at the other end of the pitch. Today, Argentina were powering towards the All Black line with spiky aggression when Marcos Kremer (outstanding all day) conceded a silly penalty entering the side of a ruck. Precisely 14 seconds later, the All Blacks score via a sumptuous offload from Beauden Barrett to Luke Jacobson who stormed over.

One small statistic from the match is quite remarkable – in 80 minutes New Zealand made more passes in centres (63) than either the Lions or South Africa managed in three Tests earlier this year.

The quality and depth of the New Zealand player base is nothing short of astonishing, and so is their commitment to speed, direct running and team work. South Africa might be the world champions but there’s no doubt who the most attractive side in the world is right now.

Both South Africa and Argentina could very well hold a joint training session this week, as their shortcomings were pretty similar.

The teams both used a 12-1-2 rush defence which requires depth in scramble to succeed and in both instances, their opponents got around them and the second wave scramble defence failed to pick off the phase runners. Maintaining width against pacey sides is key if you’re not going to haemorrhage points and whilst South Africa ran Australia to the wire, had they maintained more shape in the wide channels (despite being a man down at the time), they’d have prevented at least one of the Wallaby scores.

Both teams too need to maintain shape in midfield from their centres. In either backline there’s a real difficulty in passing from left to right in the 12 and 13 channels which cuts down their continuity options; Damian de Allende, for all of his physical brilliance in both attack and defence, still will step back inside when he is running left to right and in his last five Tests, he’s made precisely two passes in the three-quarter line off his left hand.

Both packs of forwards will also be looking to understand better when to attack or to absorb at scrum-time. There’s no doubt South Africa have consistently the best scrummage in the world but going for feet back short bind machismo based drives in their own half when all they need to do is secure and clear cost them six points and they may reflect that a little more scrummaging contrition may be needed in the future.

Nevertheless, both teams will emerge from this with answers to the questions posed above and the rematches next weekend of Sunday’s fixtures will be relished by all fans of great rugby.

Despite a moderate turnout for the Argentina v New Zealand game, the notion of playing these games back to back is a solid one and provides both fairness for player recovery, real interest for the media and a wonderful opportunity for to watch four of the best teams in the world in one bite sized package.

With Covid driving innovation, this one is solid and providing the game can be slightly better marketed and scheduled properly next year, this is a concept that would be great to see continue, this time without the incumbency of travelling restrictions which perhaps restricted a lot of supporters from witnessing and contributing to an amazing international event. It’s rare (maybe only at World Cups and Sevens events) to find four sets of fans socialising in the same area post-match but we’re absolutely sure that the lucky ones that attended had a great time celebrating the rivalries that only rugby produces.

One minor point is that the pitch was cutting up around the scrummage zones (five-metre line) by the end of the first half of the first match and making sure that the surface is fair for all of the teams competing should be paramount for the organisers.

To witness the precision of Luke Pearce and his TMO Matt Carley in delivering the superb spectacle of the South Africa v Australia game was a joy to behold. Clear communications, delivered quickly and decisively left the players in no doubt of what Pearce wanted to see and his consistency in interpretation was absolutely on point as he made sure that the match of the weekend was delivered legally and with pace and empathy.

In contrast, Nic Berry’s questionable performance in the New Zealand v Argentina match, whilst not really affecting the end outcome, might just inspire one of Jaco Johan or Rassie Erasmus (depending on which one is available, or which Twitter account is open on the day) to release the much awaited sequel to their social media rants during the Lions series. Based upon the match video material they have at their disposal, one might expect its box office performance to equal that of the Godfather II or Terminator II, so poor was Berry.

The number of times the All Blacks were allowed to lie around the ruck area was staggering; simple decisions, like allowing a player to get to his feet when falling on a loose ball seemed to be ignored, whilst Joe Moody, twice favoured with a penalty when first his knees had touched the floor, will be buying the Australian whistler beer all night. In each of these three occasions, an All Black try followed within a minute.

The interpretations and standards between the best officials and the rest at the highest level have reached quite staggering proportions. It seems churlish to criticise Berry once again when every follower of rugby knows he is doing his best, but his affect on big games is much too great and happening far too often.