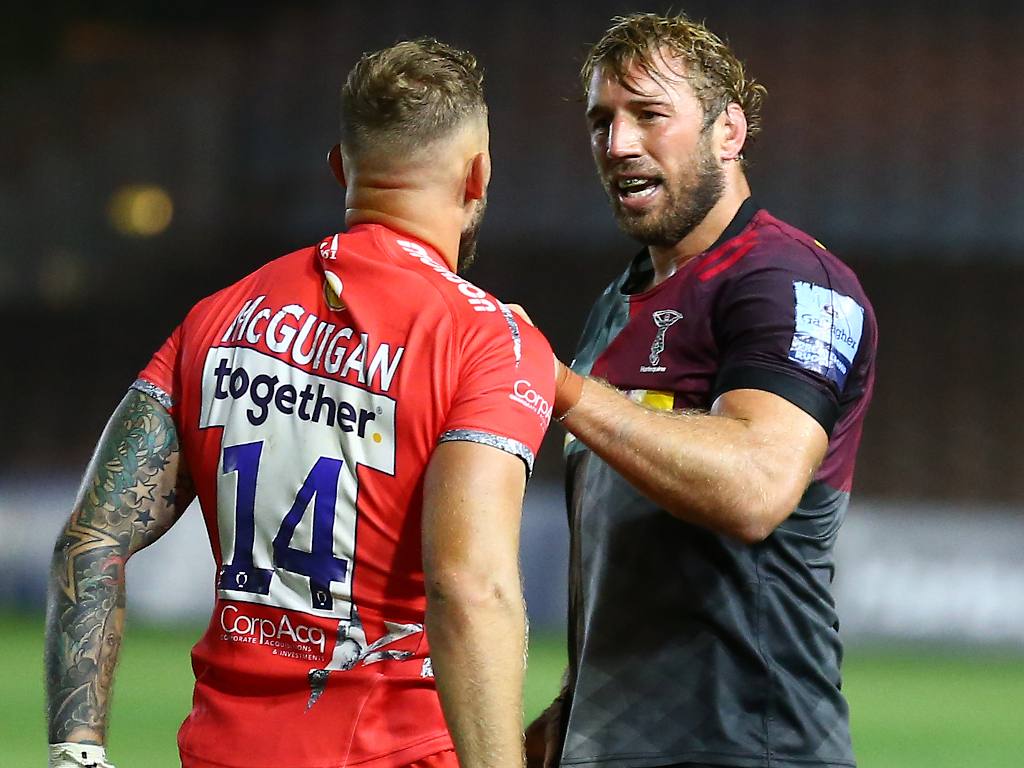 With five months out of the game you’d expect both players and officials to be a little less than pinpoint in their performances and the simple statistic of an average of 35 penalties per game underlined the rustiness of all, admittedly abetted by law tweaks and torrential rain during some of the matches.

As the otherwise excellent referee Tom Foley commented to the Chiefs and Tigers players when apologising for blowing up too early when Exeter had a clear three on two overlap 30 metres out; “Sorry lads, my fault – first one back, it’s been a long time off and we’re all getting back into it!”

Some players appear to have enjoyed lockdown a little more than others; Mako and Billy seem to have transformed themselves from the Vunipola brothers to the Roly-Poly Brothers and across the board, a few others seemed certainly to be carrying a few more pounds around their waistline than when rugby took its enforced break. Others seem to have embraced their home gyms, with Tom Curry, Jack Willis, Joe Marchant and Henry Slade all looking to have put on some serious timber, but in a good way.

In point of fact they aren’t new, the laws have been merely clarified, with key emphasis on players rolling away from the tackle area and referees keen to support quick attempts to jackal. It was great to see continuity between what we’ve seen in Super Rugby and this past weekend, with consistency from the officials across both hemispheres and real accuracy in the application of the ruck thinking.

It meant that more players were on their feet as fewer could afford to go down on tackle or ruck, it gave quicker ball at the base as less players were sealing off or lying over, and it also encouraged players to go legally and swiftly for a steal when it was clear and obvious to do so. Theoretically, if this continues, we’ll see more dynamic work around the breakdown, more hands available to carry and swifter distribution from the base.

A few players thrived under this arrangement- athletes like the outstanding Wasps back-row trio of Brad Shields, Thomas Young and Willis destroyed Saints at the contact area, and with this new style of play now favoured, we can expect to see forwards who stay on their feet legally to thrive, whilst those who try to take into isolated contact and to seal off, will wither.

🗣️ "Jack will be there or thereabouts, he can’t not be."

In Planet Rugby’s lead up preview to the restart, we commented many times about the ‘compression zone’ in the table, where six sides had only six points of separation. This was emphasised not only by the closeness of the results, but also by the ability we saw of any side to have the firepower and wherewithal to beat any on their day.

Out of the ‘big three’ of Exeter, Bristol and Sale, all were pushed right to the line and Sale in fact were turned over by a Chris Robshaw-inspired Harlequins, whilst Wasps and Bath take the crown for the most improved sides over lockdown, with Leicester Tigers, although soundly beaten, already showing a big step up in terms of organisation and structure under new head coach Steve Borthwick. However, we must also tip our hat to the bad boys of the Premiership, Saracens, who fielded a side shorn of nine players by transfers and loan deals, yet still pushed the fancied Bristol Bears all the way on the road at Ashton Gate.

The Premiership is in rude health, all things considered, and if it continues in this competitive vein, only the finest of margins will remain between the top eight when we get to play-off time.

There’s no doubt that Eddie Jones’ first EPS selection will see a host of new faces and already, some big names have thrown their hat in the ring. Back three challengers will undoubtedly include Ollie Thorley, who was outstanding in the Cherry and Whites’ thrashing of Worcester. In midfield, Jonathan Joseph and Marchant put in some big shifts, with the latter demonstrating just how his footballing has developed during his sojourn to Auckland, whilst Ollie Devoto and Ollie Lawrence both had their moments for Chiefs and Warriors, and Marcus Smith underlined his England claims with a display of control and imagination at the Stoop.

Scrum-half is a real conundrum for England right now and we saw Alex Mitchell put in a sniping display for Saints but question marks remain over the speed and accuracy of his distribution. However, the real star at half-back was Ben Spencer, who put in a consummate running display at Bath, going the length of the pitch for a debut try.

England are stacked with back-row options, but Willis was probably the player of the round this week, netting a staggering eight turnovers, with Shields, still only 29, putting in a consummate display of rugby intellect at number eight. Others such as Curry, Alex Dombrandt and Zach Mercer all threw their hat powerfully into the ring, with that new law interpretation really favouring the athletic back-rower, able to stay on feet and jackal or defend with accuracy over pure muscle.

After five months out, @WorcsWarriors are off to a flyer ⚡️

A word too for new Warriors skipper Ted Hill – despite the scoreline, his work at Sixways was Herculean, underlined by his support work for the opening try; in terms of an athlete that fuses size and power with skill and intellect, few are better and his substantial claims, alongside those of Willis and others, will surely give Jones a headache of the right type.

Up front, some big statements were made by Luke Cowan-Dickie, Harry Thacker and Tom Dunn, whilst David Ribbans showed his appetite for try scoring hasn’t diminished. But one player who again lit up everything around him was Maro Itoje, simply the best player on the park at Ashton Gate, able to keep his makeshift Sarries in the game to the last moment.

With one week of return to play, we’ve seen a minor shift in form and expectation. Whilst Exeter underlined their credentials, Bristol stuttered to win and Sale failed, we saw the emergence of Bath and Wasps as real challengers for top four spots with some scintillating rugby. Wasps seem to have worked hard on their defence, whilst Bath’s set-piece, often their Achilles heel, showed vast improvement.

Of all the teams, Saints perhaps were the one side that struggled to adapt their big back five forwards to the new law interpretations whilst Bristol and Sale will have concerns over the way their match-management came under pressure at half-back. Lastly, a huge shout out to Harlequins and in particular, Robshaw, who, after almost 300 matches for his club, put in a consummate display to take Paul Gustard’s side to a crucial win at home versus Sale.

But considering the enormity of the challenge of new laws, time out, lack of real crowds and reduced match/contact fitness, the Premiership delivered some high class, competitive rugby and we should thank all involved for their incredible efforts.