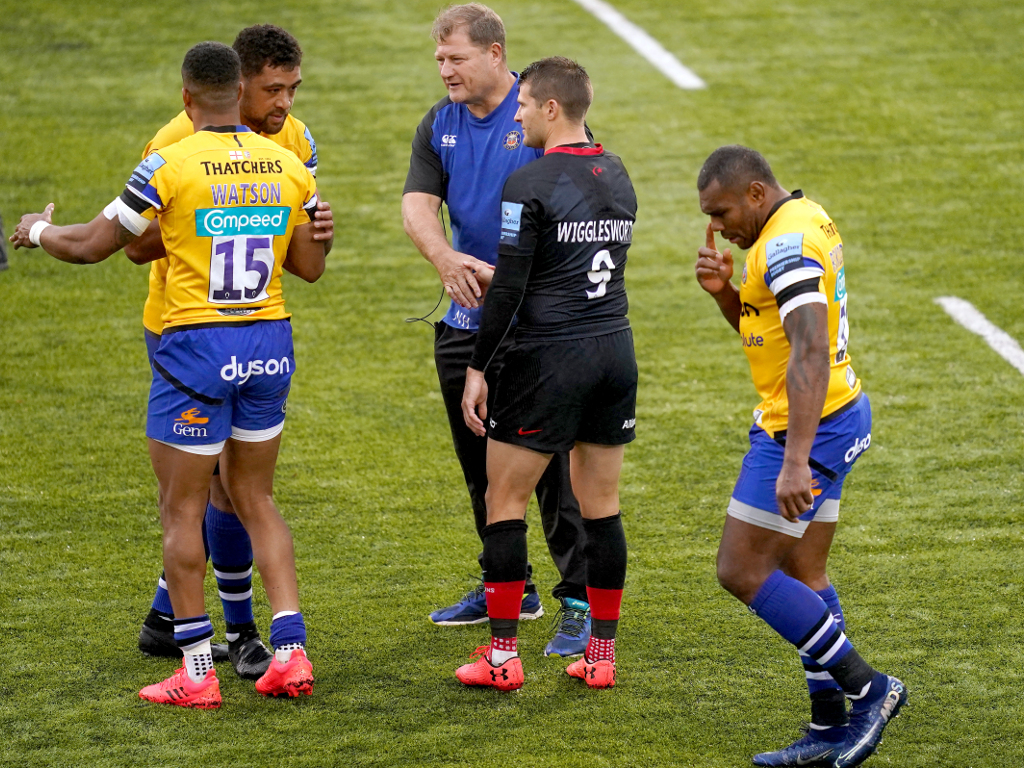 With Premiership Rugby and BT Sport assuring that, in principle, all games would be played and finished at the same time, we now know the semi-final line ups – or do we?

Whilst Exeter and Wasps are rightly assured home ties, their opponents won’t be settled until at the earliest, Tuesday, at the latest, Wednesday evening – a situation caused by the postponement of the Sale v Worcester Warriors fixture until Public Health England can carry out a re-test of the Sale squad, a wholly unsatisfactory outcome, but one, given the immense disruption of the season, that perhaps can be forgiven.

In some quarters, Sale director of rugby Steve Diamond has been accused of playing a media game, announcing that a fit but makeshift 23 were available on Friday without actually naming them, but, understandably, Worcester Warriors, who have a completely negative squad, wanted to abide by Public Health England’s rulings.

With the Northampton Saints v Gloucester game called off within a heartbeat due to Saints’ honest declaration that they could only field two front-row forwards, one wonders what the real position is, but right now, the truth is there’s confusion to the PRL product at a point in time where clarity is essential.

The opacity of the semi-finals was further compounded at Allianz Park where Bath blew a 17-0 lead to record a draw with the former giants of the Premiership, Saracens. The game, and Saracens’ comeback, played in a howling wind and driving rain, was reminiscent of a James Cameron ‘Terminator’ movie, with the unbeatable Saracens machine finally taking its last Premiership victim but dying into the abyss of Championship rugby as it did so.

In truth, if Bath fail to reach the semis now, they only have themselves to blame. They will learn from the cultural winning mentality from the Saracens they faced on Sunday, a team that have forgotten how to lose and whose self-belief galvanised a makeshift side.

Much has been written about Saracens, much hatred has been spewed out over social media and their reputation will be tarnished forever. But no true rugby fan could help but feel deep sadness, as a team that strode European Rugby like a Colossus finally made its last bow. The game was richer for them, the Premiership will be poorer without their glittering excellence.

As we approach the semi-finals, we know from history that form, right here right now, is the single most important asset a team can own.

Wasps and Bristol, both qualified, are in ripping nick, putting scores on teams that wouldn’t be out of place in the IPL. Whilst Wasps have the all-team game, Bristol have the big guns, the players that change games in an instant, and in the one-off situations that knockout rugby produces, their firepower may just prove telling.

Whilst Exeter have yet again led the pack virtually all season, they find themselves coming into a semi-final with three losses on the bounce in the Premiership. Now, some will say this is a result of fighting campaigns on two fronts, others will point to a need to rotate the squads and that the games were meaningless. However, winning is habitual and once losses set in, it shakes even the strongest of teams.

Although Exeter are still uncertain of their opponents next weekend, the simple truth is they’re ripe for the taking and we believe that there might yet be a twist in the tale of the Premiership.

At 4.45pm yesterday, three titans of English Rugby said farewell to the clubs that had defined their careers for so many years.

It’s hard to think of more effective club players than Chris Robshaw, Brad Barritt and Richard Wigglesworth and to put this in perspective, between them they have eleven Premiership titles, seven European titles and five LV= Cup medals, a haul of silverware that even the very best would be envious of.

They’ll be remembered not only for their individual performances, but for their leadership, their rugby honesty and the manner in which they conducted themselves on the field, each man defining the spirit of the game we follow and play.

Whilst Barritt will finally put his injury ravaged body out to pasture, Robshaw and Wigglesworth intend to continue in the game, with the mighty Quin travelling to California as player coach with San Diego and the Saracens scrum-half rumoured to be taking on a coaching role, possibly with his former club Sale.

As Robshaw walked off at Welford Road, Tom Youngs, his opposing skipper, bellowed out “Three cheers for Robbo…” – wherever you are today, stop for a moment and do what Youngs and Tigers did – give all of these three greats of the domestic game a moment of your personal applause.

With England having just unveiled a 28-man squad and with injuries producing question marks over the centres and back five of the pack, Eddie Jones has covered his midfield options with the recall of Quins centre Joe Marchant, but there is no sign of rumbustious Worcester Warriors 13, Ollie Lawrence.

Elsewhere, Courtney Lawes’ injury removes vast versatility out of the England pack, compounded too by issues with Joe Launchbury’s calf tweak. We expected the call-ups of Northampton duo Alex Moon and David Ribbans and once the Premiership knockout stage is over, Dan Robson should be included after another blistering running display against the Chiefs. Jones is also expected to add his Wasps half-back partner Jacob Umaga into the mix.