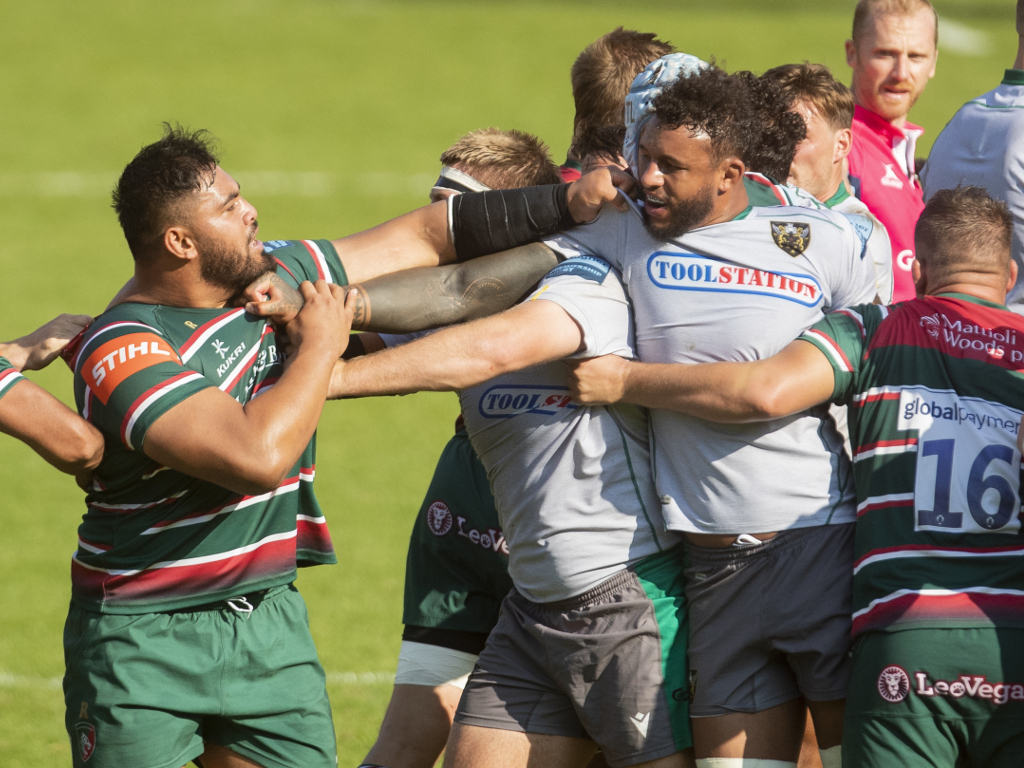 With just two rounds to go, the top of the table could not be more compressed. Whilst Exeter Chiefs are now assured of a home play-off place, just two points separate the chasing four clubs – Wasps, Bath, Sale and Bristol, with Wasps, the form horses, and Sale holding aces in terms of their significant points difference. Bristol’s seismic 59-35 loss at the Ricoh stadium on Sunday sees them slide down to fifth, with Bath putting in arguably their performance of the season at the AJ Bell, comfortably disposing of rivals Sale 37-22.

However, it’s the next two rounds that will inform the final placings and it’s the side that manages two wins or a win and bonus point loss that will prosper to the play-offs. Wasps have a tough trip to a resurgent Harlequins followed by a visit by Exeter; their impressive try-scoring record suggests they’ll do just enough from those two games. Bath will be reckoning on a win against Gloucester but have a tough test away at Saracens in the last weekend – in truth they can be sure of neither. Sale’s run-in looks easier, with Saints away and Warriors at home suggesting they could get full points, whilst Bristol will be banking on a full points tally, hosting Tigers and then travelling to London Irish with all to play for.

Unless we see a significant performance from one of the lower table sides, it’s Bath that we believe will miss out, leaving the likely quartet of Exeter, Sale, Bristol and Wasps competing in the knock-out stages of the tournament.

With many teams forced to slash playing staffs due to costs and Covid-19 impact, forcing them to rely on academy players during a season where fixture compression has tested the depth of every squad in the Premiership, we’re seeing a lot of unfamiliar names come to the fore in exciting and close battles in virtually every round of the tournament.

The good news is, one theme has emerged from these unfamiliar names – they are young English players and each and every one of them look like serious prospects for the future. Players like Jack Clement, Aaron Hinkley, Zack Henry, Max Malins, Josh Bayliss, Joel Kpoku, Tom de Glanville, Josh Hodge, Harry Randall, Alfie Barbeary and Gabriel Oghre aren’t exactly household names, but regular watchers of the England U20 games will be well aware of their potential and talent levels.

The fixture compression means these young guns have been thrown into senior rugby to sink or swim – the good news is they’re not only swimming but some, notably de Glanville and Randall, are positively putting in Olympic pool qualifying times. Hinkley and Barbeary in particular look to have stellar careers ahead of them and we’re pleased to report the nursery of English rugby is absolutely thriving in adversity.

Over the last two rounds, we’ve seen themes emerge with some bumper points scoring in the Premiership. Indeed, Round 20 was, we believe, the first time in Premiership history that the 12 teams averaged over 60 points per game, a testimony to good weather, attacking intent and, importantly, positive refereeing. The total number of points for the round (370) is the most scored since there were 379 points racked up in Round 22 of the 2017/18 campaign.

It’s the officiating that has impressed us most of all, with some magnificent and empathetic performances put in by every referee across the board. Just as England have a crop of golden youngsters coming through, so too, it seems, that we have a bumper harvest of outstanding young referees adding a lot of value to our domestic game. From the always outstanding Wayne Barnes and Luke Pearce, to the emerging talents of Tom Foley, Matt Carley, Christophe Ridley and Craig Maxwell-Keys, we’re seeing consistency of decision and interpretation producing some thrilling rugby. At the heart of this is the great Barnes, the man tasked with the RFU Refereeing Development programme. Barnes’ attention to detail, ability to get officials working as a team and his simple and engaging match management means he’s setting a standard that the youngsters are following with eager glee and he’s not afraid to downstream his knowledge for the betterment of the game. The officials should be congratulated – just as players are raising the bar with every performance, so are the Premiership officials and for that, they should be applauded.

With back-row options bursting at the seams and young props pushing their claims powerfully, it’s been great to see the emergence of a couple of speedy backs to pressure the usual incumbents. In particular, Tom de Glanville’s poise and rugby intellect at full-back looks oven-ready for the pressure cooker of test rugby and England may finally have found the specialist 15 they’ve long searched for. Alongside De Glanville, Ruaridh McConnochie has been a lethal weapon for Bath and his finishing is one of the main reasons that the West Countrymen find themselves challenging for honours – both should make Eddie Jones’ EPS when it’s announced in October.

But backing up Ben Young’s excellence at scrum-half has long been the Achilles heel of English rugby and while Ben Spencer has been tearing it up for Bath, a slightly more mature Wasp has been commanding every game he’s played; Dan Robson has always been mentioned in despatches but injury and form has restricted his caps to just two. However, right now, his partnership with England candidates Brad Shields in front of him and Jacob Umaga behind, is tantalising and destroying every team that he faces. He’s on red-hot form currently and now is the moment to let the Wasp buzz in the colours of England.

The last word this week goes to Leicester Tigers; a few weeks ago, like their namesake, they looked in danger of total extinction, but the arrival of Steve Borthwick and his detailed organisational skills has improved their fortune no end. They finally look like a side that actually had met in training before matchday, they’ve gone back to the traditional Tiger strengths of set-piece power and simple but effective phased forward play and finally, they’re bagging a few results that their heritage and fan base demand.

There’s no bigger local derby that Tigers versus Saints and the boost that the narrow win will give them, one based upon forward power and scrummaging excellence, is quantum. They’ve been the standard bearer for so long in English rugby that a weak Leicester is something no English rugby fan wants to see. Hopefully, under the brooding presence of Borthwick, they’ve finally turned the corner and are out of the gloom that’s clouded Welford Road for the last few years.