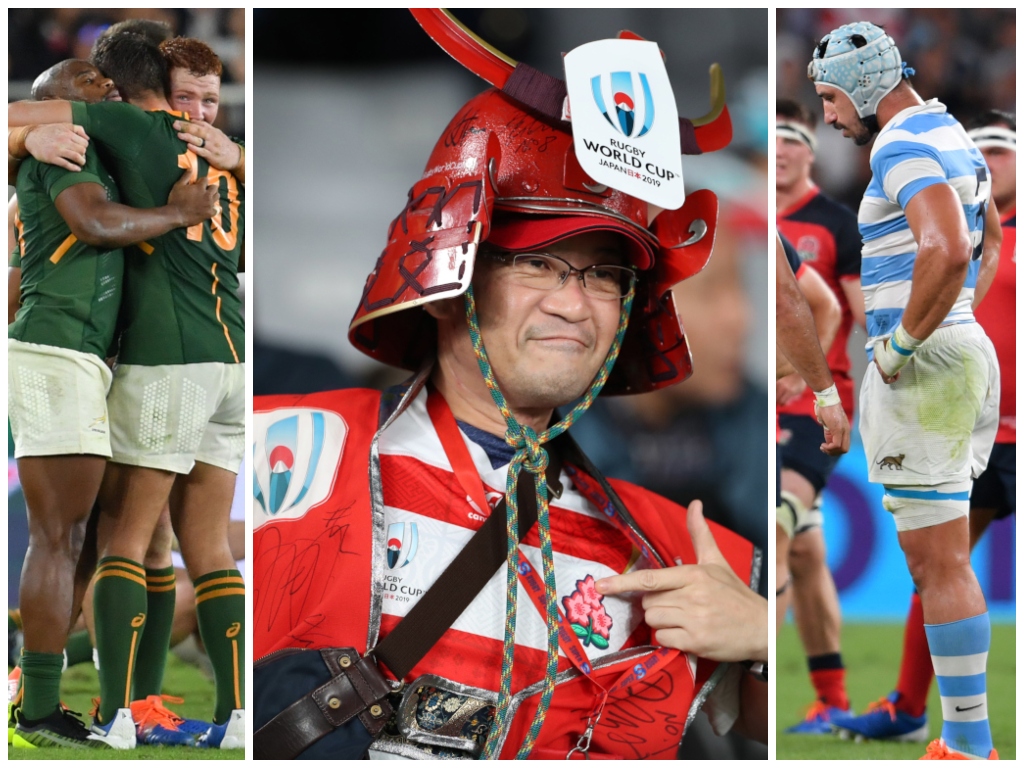 Following the conclusion of the 2019 Rugby World Cup, which saw South Africa claim the title, here’s our five takeaways from the tournament in Japan.

When World Rugby awarded the tournament to Japan a few years back, a few eyebrows were raised, some more quizzically than others. It was, to put it mildly, a left-field appointment, but one based upon a fantastic bid from the Japan Rugby Football Union, evidenced with the great success the country had had delivering three Olympic tournaments from 1964-1998; a bid balancing top-tier opportunity with the need to grow the game and to engage the non-core nations.

To say the gamble succeeded is an understatement; it was a roaring success with the host nation embracing rugby and rugby embracing Japan. Emotional, colourful, exciting and professional are all apt descriptors of the tournament outcome with thrilling rugby played in astonishing stadium environments.

Everywhere one went in Japan the chat and the rattle was about the matches. Never a country to do things by halves, the populace learned in detail the back story and the stats of their visitors, and every single citizen of the country appeared to a well-researched view on the chances of the various teams.

Even in adversity, with a super-typhoon smashing half of the country apart, a day later it was business as usual. Yes, for a few days there were a few moans and groans on social media about cancellations, but nobody who witnessed the devastation (and lives lost) could argue that the crisis management wasn’t anything but excellent and pragmatically thought through.

A senior World Rugby official even commented: “Sometimes the boldest of decisions are the most rewarding and awarding #RWC2019 to Japan back in 2009 was perhaps the boldest, but my goodness, it’s the best decision World Rugby has ever made!” And they’re right to be proud.

It remains to be seen whether long term the game will continue its momentum in the Land of the Rising Son but, knowing the Japanese enthusiasm for the sport, it’s a pretty safe bet to say it will.

Sayonara Japan, the rugby world bows to you.

"The way they have hosted this whole competition has been incredible"

In many sports, rankings mean little when compared to results at World Cups but, as we step away from Japan, there’s a remarkable symmetry with regards to the results, form and the rugby we saw played.

There’s no doubt, even for the most hardened critic, that South Africa are the worthy champions and are the best team in the world. They peaked at the right time, had arguably the best all-round game and certainly had the best set-piece in the tournament. They also had the political turmoil in their homeland as a 16th man, charging them to inspiring and gritty performances against some highly-skilled teams.

New Zealand’s all-round legacy and consistency in the last few years see them at second, despite disappointment overall. They are pushed hard by the brilliance of the lighter-weight English side who surprised many with their speedy style of rugby and, along with Japan and Fiji, undoubtedly produced some of the most memorable spectacles of the competition. It’s great also to see those teams like Japan and Fiji climbing above some of their more illustrious Tier One foes.

In short, when one looks at the final standing in the tournament and the world rankings, your initial reaction is: “Yep, that’s about right,” and in a sport where fans will argue over a beer or a coffee regarding the smallest of issues, that’s a testimony to just how successful the World Cup was.

I fought the law

After a couple of early red cards, and with World Rugby making clear to all that tackle height was something which HAD to be sorted, we saw officiating that was of the highest order throughout, with consistency applied via proper decision-making processes that the referees used to great effect.

A game of rugby is always going to be less binary than say football; the laws are complex and are ever in flux but, despite this, not one game turned on one single decision, a real litmus test of ‘getting it right’.

Gone, it appears, are the days of the fat kid bossing the tackle line through reckless aggression and that’s a great achievement for the game.

The ‘no tolerance’ approach to high tackles also had a couple of secondary benefits; firstly, players tackling lower allowed carriers to free their arms to pass or offload, resulting in much greater phase continuity and faster matches.

"It's a disgrace, it's cheap. That's not even a tackle, it's a cheap shot."-@ugomonye

Secondly, it brought skilful players some breathing space, both as defenders and attackers. The best tacklers are those like England’s Sam Underhill and South Africa’s Siya Kolisi; both smaller flankers, who had the agility to change their moment of hit and to tackle fairly at the last moment – it’s no surprise both men have left the field with their playing reputation enhanced to that of absolutely world-class performers.

Moving forward, there will be a few more tweaks, such as ‘time off’ regulations for resetting scrums and also perhaps the removal of the longer extended ‘caterpillar’ ruck, with World Rugby wanting half backs to speed up the time taken for box and exit kicks.

But all in all, with other sports like cricket and soccer having officiating issues around VAR and the third umpire, rugby’s officials were a beacon of shining practice and contributed a huge amount to the success of the tournament.

One of the oldest adages in the game is you can’t win much without getting the basics right. Despite all the pace in the game, the improvement in tight five ball handling and the legal brutality of defences, we learned one thing from the final itself; if you don’t get your restart, scrum and lineout right, you’re toast.

Despite the need for all players to be fit, agile and mobile, sides that historically could always rely upon an edge in pure bulk found that teams had caught up technically and no longer could be bullied. The way the Japanese scrummage coped with Scotland is a lesson in technique, and scrummaging as an eight for duration. Elsewhere, South Africa’s hang time at restarts was at the core of their ability to restrict territory – indeed, in the final itself it was probably even more important than the Springbok scrum, as Handre Pollard was getting four and five second hang times on his restarts over Owen Farrell’s and George Ford’s maximum of 3.5 seconds.

Detail like this is match winning – and so it proved. In the final it prevented England from any form of realistic exit strategy and resulted in huge territorial frustration. When the games have the modern props running hither and thither AND have the basics bolted on in this manner, the outcomes are compelling.

Always encourage that level of innovation, but always also understand that without a set-piece, rugby on the back foot at this level is almost impossible, exactly the way it should be.

As with all previous World Cups there is always the question of legacy and, with the dust barely settled, it’s far too early to be able to measure the long-term outcomes.

With pushback from various nations with regards to a ‘global calendar’ it’s now incumbent upon World Rugby to act and capture the momentum that the World Cup has given the game.

There are many things on the wish list: promotion and relegation (or even two tiered systems) for the Rugby Championship and Six Nations. A need to get Japan, Fiji, Georgia and Samoa playing regularly against the big boys to increase their exposure and funding, but also to prevent other sides creaming the best talent from those passionate nations.

This could be an amazing addition to the 6 nations if its true https://t.co/Mp789I2CYZ

Sadly, one major obstacle to this has always been gate receipts and funding, meaning that there’s massive disparity in union income and player reward when T1 nations meet T2 nations. It’s ridiculous just how financially unattractive it is for, let’s say, the All Blacks to visit Fiji or Samoa, or for those nations to tour the four Home Nations.

Until World Rugby start to ameliorate the rewards and TV rights equations, these problems, those of commerce not playing conditions, will remain.

There’s a huge opportunity to promote the sport now and the governing body must act fast to remove these simple commercial barriers and create a more level playing field so that the T2s are not playing matches metaphorically uphill.

It’s all very well for the game to say it’s a desire, but let’s make it happen through simple and fair discussion.