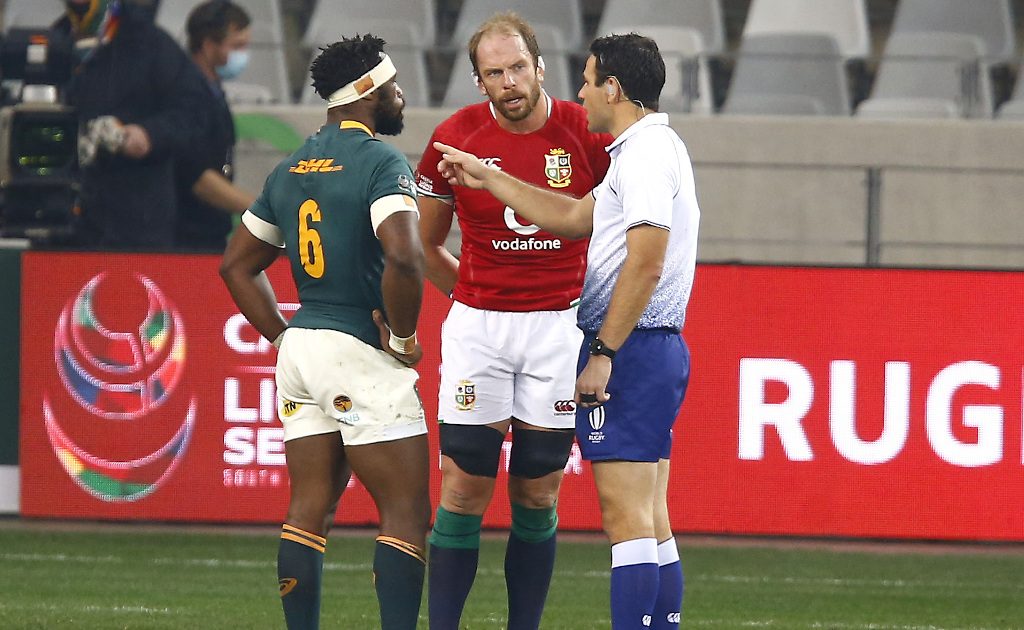 Following South Africa’s 27-9 victory over the British and Irish Lions on Saturday, here’s our five takeaways from the match in Cape Town.

This again was another game of two halves, with South Africa coming back from 9-6 down at half-time to control the match to win 27-9, with Makazole Mapimpi producing a brilliant display to take his team home.

The match was sluggish, played at a snail’s pace on a pitch that offered little to anyone that wanted to play rugby, but South Africa adapted much better to those conditions than the British and Irish Lions did, and when the ball is hoofed into the air by both sides for 80 minutes the underfoot conditions are rendered irrelevant.

The win sets the series up for an all or nothing decider in a week’s time. With such little to choose between two giants of the game, it’s fitting that the interest in the series will be extended and next weekend promises to be an absolute cracker.

Many of the South Africans had gone into this game short of Test match sharpness, but the run-outs of the last few weeks allowed the Boks to build momentum, mainly through the brilliant control of Handre Pollard at fly-half, supported by magnificent kick chasing from his entire backline, notably Lukhanyo Am and Damian de Allende, who created havoc in the aerial battles.

The switch of Franco Mostert from lock to blindside flank was a move of rugby genius. For most of the first half, Mako Vunipola, one of the Lions’ best performers, did a great number on Frans Malherbe whilst the latter had Kwagga Smith scrummaging behind him. Mostert’s switch allowed competition at scrum time and eventual dominance, with the power from the three Bok locks really telling.

That substitution also allowed South Africa to make much better inroads in the lineout, and that, coupled with an absolutely abysmal performance in both parts of the set-piece from replacement Lions hooker, Ken Owens, combined to give the hosts momentum and belief.

Finally, the Springboks played for the full 80 minutes – they didn’t fade and, charged by the adrenaline a lead gives you, they kept momentum going right until the end.

Above all, they had a game plan – a simple one – but an effective one and that in the end paid dividends.

For 40 minutes the Lions were superb – massive on the gain line, huge in the set-piece and brisk around the field. However, as the Springboks turned the screw, they really didn’t fire a shot in the second half.

They lacked shape – something to give them a process to deliver – and moreover they really struggled to get any form of forward momentum, with their longest carry of the match being something like 18 metres and no one managed any other single carry above 10 metres.

There was a lot of good things to take out – the first half performances of Maro Itoje and Vunipola were encouraging – but as long as South Africa met the Lions’ fitness levels, they never looked like moving out of the Springbok stranglehold.

Questions too will be asked about the aerial defence and the commitment to catching under pressure, and in that area the Lions were pulled apart.

For a side that looked world beaters seven days ago, the change in fortune was remarkable but one borne out of a lack of execution and a real dearth of creativity in the backline. The most worrying thing, however, is that the momentum is now with the Springboks and that will be extraordinarily hard to stop.

One of the most startling things about this match was the sheer length of the game. Each half took 65 minutes to deliver and that allowed South Africa to play hard rugby at the pace that suited them. With referee Ben O’Keeffe deliberate and consistent in his decisioning, he took great time to go though every aspect of every decision in detail, and that very much worked in the Springboks favour.

In every other aspect, the margins went the way of the host. Every contest, every small battle seemed to be lost and that will worry the Lions.

To suggest that was luck is missing the point. South Africa played pressure rugby with incredible accuracy and execution, based upon a brilliant rush defence – you make your own luck in rugby and South Africa did that aplenty.

They will have learned a lot from this game. They’ve unpicked a Lions weakness in the aerial defence, they hold the whip hand in the set-piece and moving forward, they’ll be relishing next weekend.

This is simple – the Lions have four work-ons this week. Firstly, get pace into the game and prevent endless stoppages – play at your speed and control the clock. Secondly, up the tempo in the set-piece; with luck, Wyn Jones will be available next weekend and he’ll add depth of the base. Jamie George, the best set-piece hooker the Lions have, must come in over the hapless Owens and at lock, it might very well be that the bell has tolled for one of the proudest of Lions, Alun Wyn Jones, who was anonymous in every aspect, and Iain Henderson must now surely start.

The aerial battle needs shoring up big time and with the best defensive full-back in the United Kingdom, Liam Williams, not even in the matchday squad, we’ll surely see a recall for the wiry back three player.

In midfield there was zero go forward and the statistic remains that no Lion managed a carry of over 10 metres other than Chris Harris in the first half. Dan Biggar became incredibly predictable and there’s a chance that Owen Farrell might well start with Bundee Aki brought in to add some fire into contact.

But the biggest issue will be the bench; not one of the Lions replacements gave any momentum that wasn’t on the pitch before, with the possible exception of Farrell, who tried manfully to get some front foot momentum with his exit strategies.

The worrying thing for the Lions is that they looked woefully short of both power and control. Whilst there will be calls for flying wings to be selected, the issue is not there; the problem is one of the simple basics of rugby and right now, it appears that the Lions can change the bowlers, but they can’t change the pace of their bowling.