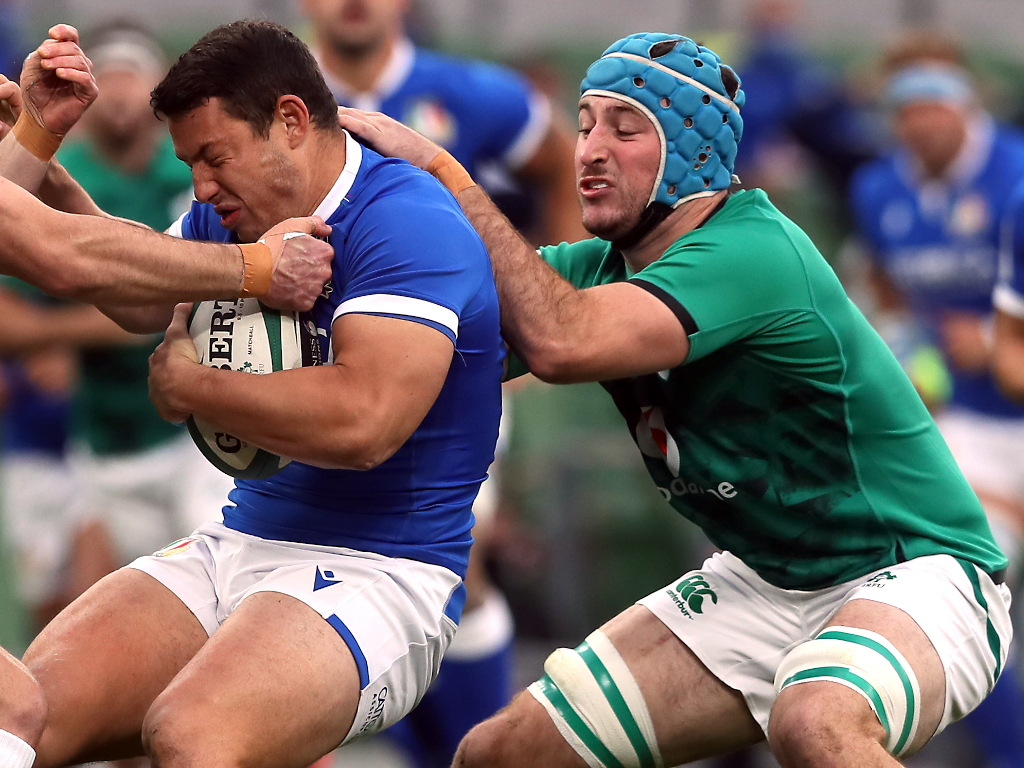 Following a 50-17 victory for Ireland over Italy in their Six Nations game, here’s our five takeaways from the fixture at the Aviva Stadium.

Ireland were good value for their win as they imposed a stranglehold upon the game that simply choked any Italian ambition. Whilst Andy Farrell will be delighted with his side’s seven tries, including two from debutant Hugo Keenan, he’ll be a little concerned that almost all of them came from Italian turnovers or mistakes, and that his midfield and go-to runners created little in terms of phase play.

It’s easy to criticise on a team’s first run-out, but Ireland’s progress more often than not was caused by turnover, error or simple defensive misalignment from the Azzurri. Franco Smith will be pleased by the impact his set-piece had but should rightly be very concerned about his wide defence, especially in the 16th man channel, a defence that proved very easy to unlock. However, in attack, Italy’s intent and ambition was clear, and their phase play could’ve yielded better results but for the profligate self-induced errors in final execution.

Key to Ireland’s victory was their absolute dominance at the breakdown. They were much quicker to get over the ball and steal, aided by the lack of the ability of the Italian pack to support their own runners. Will Connors, enjoying a titanic season for Leinster, made hay over the ball, aided and abetted by Tadhg Beirne and the outstanding CJ Stander. Yes, referee Matt Carley allowed Ireland to get away with murder at times – Caelan Doris clearly coming in from the side to steal to set up Keenan’s second try – but at Test level you make your own luck.

Part of Italy’s problems came from their back-row selection, something that normally is a strength. Their issue is they have got three strong, tall carrying power players but not one that is an expert on the floor. With the new laws rewarding the speedy jackaller, Smith may yet have to rethink an area of selection that before the game, he regarded as a strength.

The good news for Ireland was the impressive displays by two players making their debut in green. Keenan, bagging two but unlucky to have a third ruled out due to an obstruction in midfield by James Ryan, became the first Irishman to score a brace on Test debut since Dave Kearney in 2013 and showed immense appetite not only to finish, but to go looking for work.

On the flank, man-of-the-match Connors put in a complete performance, adding real steel in the chop tackle and jackal, poaching four turnovers and completing 21 tackles on the day. Ireland will welcome his display; openside has been a bit of a makeshift position for many seasons for them but now and it seems they might just have found the right man to take advantage of the new ruck laws in the shape of the outstanding Leinsterman.

However, the moment of the match belonged to the 20-year-old Italian, Paolo Garbisi, who tore the Irish defence asunder with an impish dummy and feint to go under the posts. Smith speaks highly of the young pivot, and based upon his try in the last moment, we can see why.

With Garbisi putting in a decent shift at 10, the notion of picking Carlo Canna, normally a fly-half, as a playmaker at inside centre seemed a decent move in the first 10 minutes of the game, but a lack of power runners taking pressure off him in the carry meant his time on the ball was hurried. The lack of cohesion between defence and kick from the Azzurri was palpable – a kick is only as good as the chase and in this instance, the execution of both was severely lacking.

However, there were a few green shoots of promise; Italy adapted better to the whims of Carley at ruck time in the second half, they showed intelligence in phase play and they finished well when given the opportunity.

Looking ahead to Paris, Ireland really need to discover more form and shape in attack if they’re to trouble the powerful and emerging French side. Johnny Sexton and Conor Murray looked ponderous and lacking in speed of thought at half-back; there was a distinct lack of ability to attack in phase play, with the Irish centres not allowing continuity in attack.

However, a win is a win at this stage of the international season. In terms of the wider picture, Ireland will learn a lot from this splendid victory; most of all, they’ll learn what they need to improve upon next week in Paris when they travel to secure the Championship.