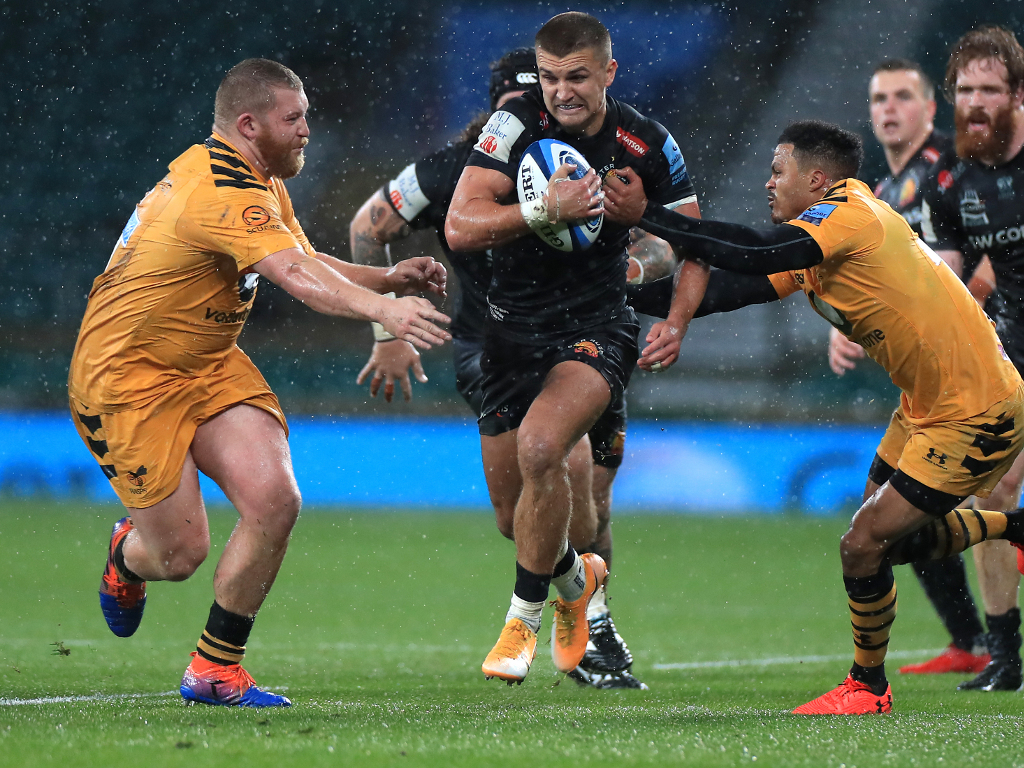 After thrilling action in Saturday’s Premiership final, Planet Rugby features writer James While has written his five takeaways from the game.

The best thrillers go down to the wire with no hint or clue as to the conclusion of the plot.

Exeter Chiefs versus Wasps did exactly that, with two proud and talented teams going toe-to-toe right down to the final whistle, in a remarkable match that saw Exeter become champions for the second time, beating the Midlanders 19-13 at Twickenham.

Given Wasps’ position regarding Covid-19 related unavailability and their inability to train or even name 23 players until two days ago, their performance was remarkable, with the old firm of Dan Robson and Jimmy Gopperth aided by the young upstart, Jacob Umaga, controlling possession and territory in conditions that could best be described as monsoon-like.

But Chiefs’ desire and experience took them home. Several times had they been robbed at the final hurdle in recent years but on Saturday they held their nerve and made it over the line to be crowned as champions again, after they also beat Wasps in the 2017 showpiece.

Close games often rely upon one or two moments of brilliance to inform the result. Step up England centre Henry Slade, a man too often in the shadows of players deemed more physical at international level, and who, in the 18th minute, finally got the mismatch in midfield that he needed as his quick feet turned the Wasp defence inside out to scamper over for a hammer blow of a try.

The Chiefs centre was a commanding presence all day, adapting to conditions not favourable to his precision running and handling. When Chiefs needed the long boot, his touch finding was immense and accurate, with one howitzer of a penalty making 65 metres to touch. When they needed the big hit in midfield, it was he who led the blitz defence and when they needed someone to make hard yards in their own half out of defence, it was Slade who led the charge.

England have confessed that they’re worried who is going to fill the massive crash-ball shirt of Manu Tuilagi for the next six months. Judged on Slade’s showing yesterday, they shouldn’t fret. Moreso, they should be excited to give one of the most talented running centres in world rugby an extended run in his favourite position of 13. We can’t wait to see what he will produce.

🗣️ "Now we can celebrate last week as well as this week." #EXEvWAS

Nothing is more important on wet days than simplicity of tactic and surety of set-piece. Despite the nuisance that the Wasps half-backs created when on the ball, the absolute dominance of Exeter in set-piece was the foundation of their win. Wasps, shorn of any form of depth, struggled to compete at scrum time with the international quality of Alec Hepburn, Luke Cowan-Dickie and Harry Williams.

Brad Shields is an integral part of Wasps’ lineout and leads the calling. The absence of his intellect and agility left huge holes in Wasps’ ball winning ability, but an interesting subplot saw them stop competing on the Chiefs throw-in for this reason. With Joe Launchbury delivering a compelling performance in contact, they focused on defending maul after maul in a legal manner than few ever manage to achieve against Exeter.

But the simple truth is that Sam Skinner and Jonny Hill had a field day, rising unchallenged to poach five of Wasps’ nine on target throws, effectively starving Wasps of any form of go-forward ball off their own lineout.

The game was in the balance until the last quarter, when both sides started to unload their bench. However, when you’ve struggled to get 23 fit players out onto the paddock as Wasps did, there’s always going to be compromises in terms of the replacement options you have, and the difference between the impact of both benches was telling.

That is where Exeter had an advantage which proved decisive in helping them edge out Wasps. Take off international props? Fine, we’ll bring another couple on, but two that are arguably the better scrummaging unit. Replace the best middle lock in the Premiership? Sure, we’ve got a 57-times capped Scotland international waiting for his chance to trot on. Swap the half-back? Fine, we’ve got another capped Scotsman warmed up and ready.

And, amongst these replacements were Ben Moon, an ‘original’ of the Chiefs’ 10-year journey, and Jack Yeandle, a man born less than two miles away from Sandy Park. Their impact on proceedings was absolutely quantum, with Yeandle putting in a 15-minute display of determination that was quite astonishing at times. Yes, depth was a huge contributory factor to Exeter’s win; depth of bench, depth of experience but, above all, depth of desire.

Exeter must have woken up yesterday morning in a confused place. Every target they’ve been set has been hit. Everything they’ve played for, they’ve got. They now have to reset their ambition and their next goal is to take 10 years of continued improvement into a sustained period of dominance in the game.

For Wasps, they must have woken up disappointed but proud. To have achieved what they have done – going from 10th in December to a Premiership final – is nothing short of remarkable. To have pushed the worthy Chiefs down to the wire in an epic final with only 23 fit players and a host of first choice starters missing is nothing short of miraculous. They can hold their heads up high and move on to bigger things next season.

For the players, England and Eddie Jones can no longer afford to view Exeter’s style as some form of poor relation to the ambitions of international rugby. Players like Hepburn, Williams, Hill and Joe Simmonds need their chance and have earned their opportunity. Equally at Wasps, no scrum-half in the Premiership has the complete skill-set Dan Robson has, nor does any back-row have the all court game Jack Willis possess. They must all get their chances.

But the other winners have been Premiership Rugby. Their patience, good sense and adaptability in the changing landscape of rugby post Covid has been remarkable.

Too often fans and pundits have criticised situations that have, at times, been almost unworkable, but rugby is a sport that’s outcome judged and, based purely upon the outcome of the 2019/20 Premiership season, all at PRL should be both thanked and congratulated for a season that’s thrilled, enchanted and captivated all that have watched it.