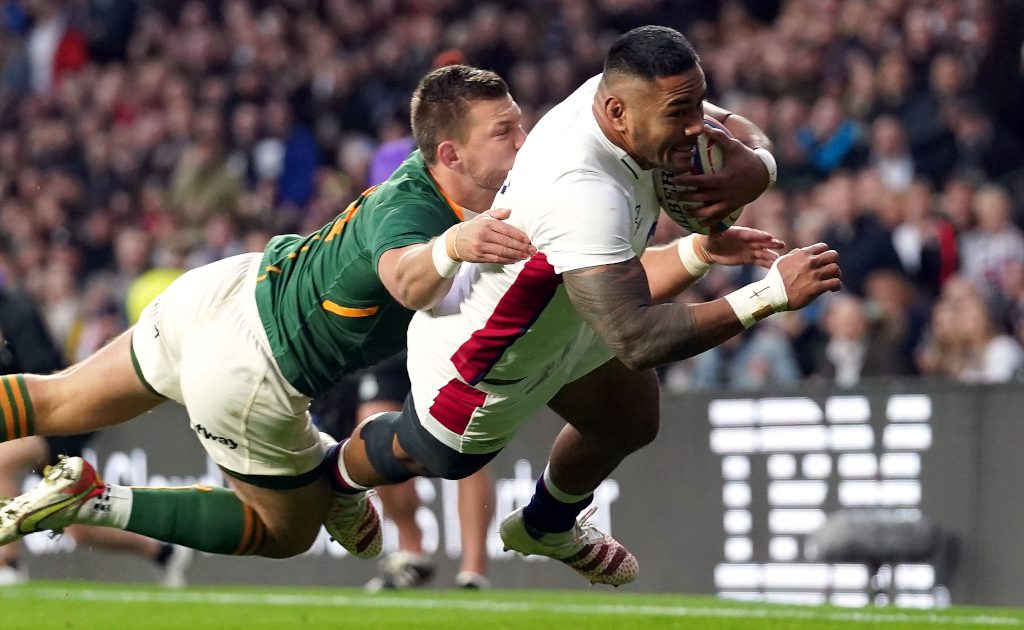 Following a 27-26 victory for England over South Africa in their Autumn Nations Series game, here’s our five takeaways from Saturday’s match at Twickenham.

A last-gasp Marcus Smith penalty saw England take the spoils by one point as they emerged victorious 27-26, in a game they dominated in skill and attack, came second in set-piece, but for a litany of second half penalties, they could have won far more convincingly.

At the heart of the victory was meticulous attention to detail by the England backroom staff – detail that provided variety, possession, territory and, ultimately, points.

For South Africa, this was one last game in a long season, one that certainly fatigued their legs if not their minds, spirit or commitment. They were mighty in their gainline offensive, committed in their set-piece, but in the final analysis lacking in the control, spark or creativity needed to match England on the scoreboard.

Make no mistake about it – this game was a watershed moment for Jones; a moment in time his coaching plans, rocky in recent times, found themselves restored to the rails of winning. It wasn’t only the win; it was the style, ambition and fearlessness that characterised every moment of England’s victory that will stay with both Jones and the 82,000 supporters for a long time.

Yes, South Africa won both the lineout battle and the scrummage battle. They caused England no end of issues at the breakdown, their legality was outstanding in scavenge, but the two key areas they failed to win was the collision and the aerial battle.

Up front, Tom Curry put in a display from eight that made a mockery of those that question his ability there. He was like a central midfielder – simply everywhere in the middle of the park, making decisions, carrying, harrying, providing a display of perpetual motion that could solve the climate crisis if someone could harness his energy.

Jonny Hill, Courtney Lawes and Maro Itoje were giants. Hill, a man who watched a frustrating Lions tour from the sidelines, ran his legs off like a man possessed, with Lawes once again proving without doubt he is the finest blindside flanker in the world. Whilst they may have been shaded at the lineout, in the loose they played at a different intensity altogether to their much vaunted counterparts, who, the outstanding Eben Etzebeth aside, were swept away by England’s three towering forwards.

Bevan Rodd, concentrating like a student sitting his A Levels, managed to win three scrum penalties with clever bind domination and a meticulous set up, whilst Jamie Blamire, someone whose mobility is never in doubt, added solidity to his England CV.

For a team that finished second best in a Rugby World Cup final, this was the sweetest of revenge. It was a triumph of will and bravery against the finest set-piece side in the world and it is a performance that will springboard these youngsters to new heights over the next two years.

In the backline, the England youngsters also played without fear and with breathtaking ambition. Smith’s electricity powered his cohorts forward, safe in the knowledge that run, kick or pass, the towering figure of Freddie Steward was there at the back, providing safe haven for any return of kick or carry. The big Tiger notched up his second man of the match award, but in truth, any of England’s players, especially Curry and Hill, could have been named as the outstanding player.

England took no time to get onto the board; a series of quick rucks created space on the right, with Bok numbers committed to defend until Smith switched direction and a couple of delightful passes later, Manu Tuilagi screamed over for his 10th England try.

Key to England’s attack was width and a ‘whole-pitch’ approach, using their mobility and kick accuracy to move the bigger Boks around the field to sap their energy. But with England conceding a litany of daft penalties in the second half, the die looked cast, and with South Africa leading by four points with eight minutes to go, so Henry Slade and Joe Marchant combined brilliantly to send Raffi Quirke flying under the posts for a debut try that might just be the most important he’ll ever score in his career.

Above all, England played with variety, pace and ambition against the finest defence in the world. To breach that line three times and to do it with such brilliantly crafted moves shows the potential of this young team. On tonight’s showing, they have no need to fear anyone.

For all their power, South Africa played rugby that was far too deep and far too reliant upon power to really maximise their second half territorial advantage. Handre Pollard might well be a points machine, but standing still and deep, he never quite had the momentum to launch attacks with the pace and precision of his opposite number, Smith.

They looked a little directionless, and with no Rassie Erasmus ready to trot on and issue his instructions, the South Africans probably lacked both the insight (and the hydration expertise) that Erasmus brings.

Whilst their front five went well, their much vaunted back-row was blown off the pitch by their counterparts, with their doughty captain Siya Kolisi the only man who walked off in credit from their trio. The famed Bomb Squad trotted on, with Vincent Koch and Malcolm Marx winning vital penalties for their team, but even they could not provide the ultimate momentum to get the world champions over the line.

There’s no doubt that their loyal and vocal supporters will point to end of season fatigue after 18 weeks on the road and a litany of injury issues to mitigate the pain of this loss, but make no mistake, this mattered to them more than any other fixture of the year and whatever the mitigation, this will hurt.

Today was a special day for England and Jones. One that you remember for a long time, but ultimately, in terms of silverware, means nothing. The only way that true meaning can be created from the performance is to capture the momentum of the moment and to carry that with you into the next campaign.

Jones mentioned post-match that he believed that the set-piece still needs work but rightly expressed delight at the open play and creativity of his attack. With his Lions regeneration exercise over, he knows that he has the spine of a team that, with the returning front-row players, can take on and beat any side in the world.

There’s no question this was the focal point of the England season, and in three games, they’ve created with width and fire, but defended well enough only to have their line broken on one occasion this November.

As a campaign, this one gets an A* and puts England on a plateau of northern hemisphere excellence alongside Ireland, the other outstanding team this November. Best of all, Jones has now won his last match against all of the southern hemisphere ‘big three’; he can spend his December break musing over a challenging Six Nations schedule ahead, but you can be sure he’ll be doing it with the grin of a young kid opening his presents on Christmas morning.