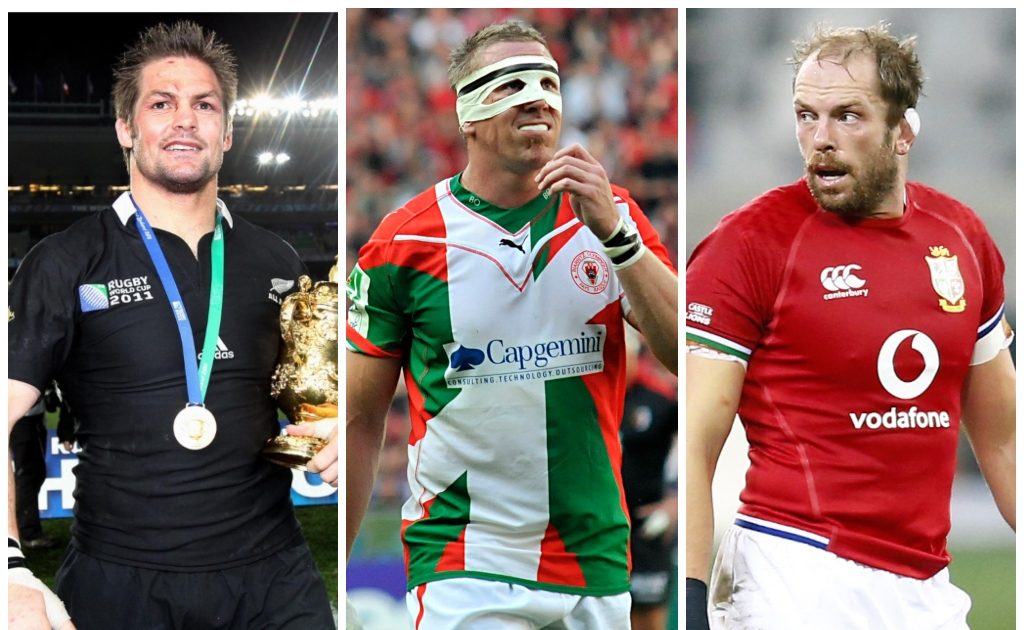 British and Irish Lions skipper Alun Wyn Jones has spent three weeks of his life defying the laws of medicine to return to play a leading part in the first Test against South Africa.

Less than a month after dislocating his shoulder against Japan, for many, this was a Lazarus-like recovery, a return to play that simply defies any form of logic.

We take a look at five players who displayed similar fortitude in their careers – the men who refused to bow down to pain and took themselves to new highs through sheer mental strength and a ridiculous dose of willpower.

In 2011, McCaw admitted he spent the entire tournament hiding his broken foot and ankle from both the media and his own coach, Sir Graham Henry. He went on, with his team to win, beating France 9-8 in the final but played in remarkable pain.

The injury really came to a head during the semi-final against Australia, and describing it in his biography, he said: “During the warm-up I didn’t feel it too much, but five minutes into the game I felt it again. Something letting go. A clunk or pop or crack. The pain came back.”

The amazing All Black then played the whole of the 2015 Rugby World Cup with the ankle held together with injected epoxy resin, literally glued back to hold him together throughout the tournament. A telling factor is that he never took the field at a training session throughout that World Cup, as Steve Hansen kept his most valuable rugby weapon in the locker, bathed in mothballs until game time.

It paid off – New Zealand retained the World Cup they won in 2011 and McCaw was named Player of the Tournament.

On Boxing Day 1988, the outstanding French openside was thrown from his car in a freak accident. His chest was crushed, his right humerus shattered and, worst of all, the nerves controlling the movement of his right arm were severed at the shoulder. Six months after the accident Cabannes’ right arm still flapped uselessly at his side and the endless neurological tests continued to find no active response.

With Cabannes initially in a wheelchair for nine months, French surgeons thought he’d never play again. But miraculously, his rehab work paid off and in 1991 he became France’s natural selection on the flank and won a further 49 caps.

As for the once-useless right arm, it came back to almost full force, causing Cabannes to comment: “I can now close my fist perfectly. Now that’s something important to have in French rugby!”

In 2004, in a club game for Saracens, Hill was tracking an opponent when his left knee gave out from underneath him. He had severed in two his anterior cruciate ligament. He spent a year trying to get fit and specifically, to make the 2005 British and Irish Lions in New Zealand tour where he shone in the warm-up games believing his knee to be solid. The flanker, considered by many to be England’s greatest player, made the first Test team and, in a moment of freakish symmetry, tackled Ali Williams and tore the new ligament in half exactly had he had done before.

Nobody gave Hill a chance to recover. He endured something like 11 separate operations, many medical complications, including a time when his body rejected the new ligaments and he lost 10kgs in three weeks due to the reaction.

However, in 2006, something finally changed. Hill used rugby as the drug to solve his knee issues, and miraculously, in 2008, he managed to play an entire season for his beloved Saracens almost on one leg – as his limping figure ambled from ruck to ruck relying purely his rugby IQ for his effectiveness. His display in the knockout stages of the European Cup against Ospreys defined his club career as he won the Man of the Match award, before calling it a day at the end of that season.

Harinordoquy and Sebastian Chabal were both formidable forces in the French back-row. However, in 2010, when playing for Biarritz against Racing 92 (then Racing Metro) the big number eight broke off a scrum and literally headbutted Chabal’s enormous knee as he was tackled. The blow resulted in a broken nose, depressed cheekbone and fractured eye ‘orbit’, three injuries that would persuade most intelligent people to give up the sport altogether.

But no. Not the big Basque Harinordoquy. Two weeks later, with a mask that was somewhat reminiscent of Hannibal Lecter in Silence of the Lambs, he defied his own doctors instructions and put in a man of the match performance against Munster. He overcame the pain and awkwardness of not only the broken nose and cheek, but a rib injury from the same tackle which also troubled him, before he eventually walked off to a standing ovation.

He appeared a week or so later for France with the same facial appendage and continued to play with the fractures until the end of the season. Biarritz coach of the time, Jack Isaac, commented: “The fact he put the mask on and ran out for us boosted the group – it was a reflection of the courage he shows week in, week out.”

Ok, so this one takes the prize by some distance. Shelford is regarded as the hardest player ever to don an All Black shirt – that’s saying something considering the production line of iron men that emerge from the Island nation.

Wind back to 1986 and the infamous “Battle of Nantes” in the second Test, New Zealand versus France. Roughly 20 minutes into the match, he was caught at the bottom of a rather aggressive ruck, and an errant French boot found its way into Shelford’s groin, somehow ripping his scrotum and leaving one testicle hanging free. He also lost four teeth in the process.

However, they breed them tough in New Zealand and, incredibly, after discovering the injury to his scrotum, he calmly asked the physio to stitch up the tear and returned to the field before a blow to his head left him concussed.

He was substituted and watched the remainder of the game from the grandstand where he witnessed the All Blacks lose 16–3. There’s been some tough men in the game, but in the pantheon of hard men, Shelford is on another level entirely.