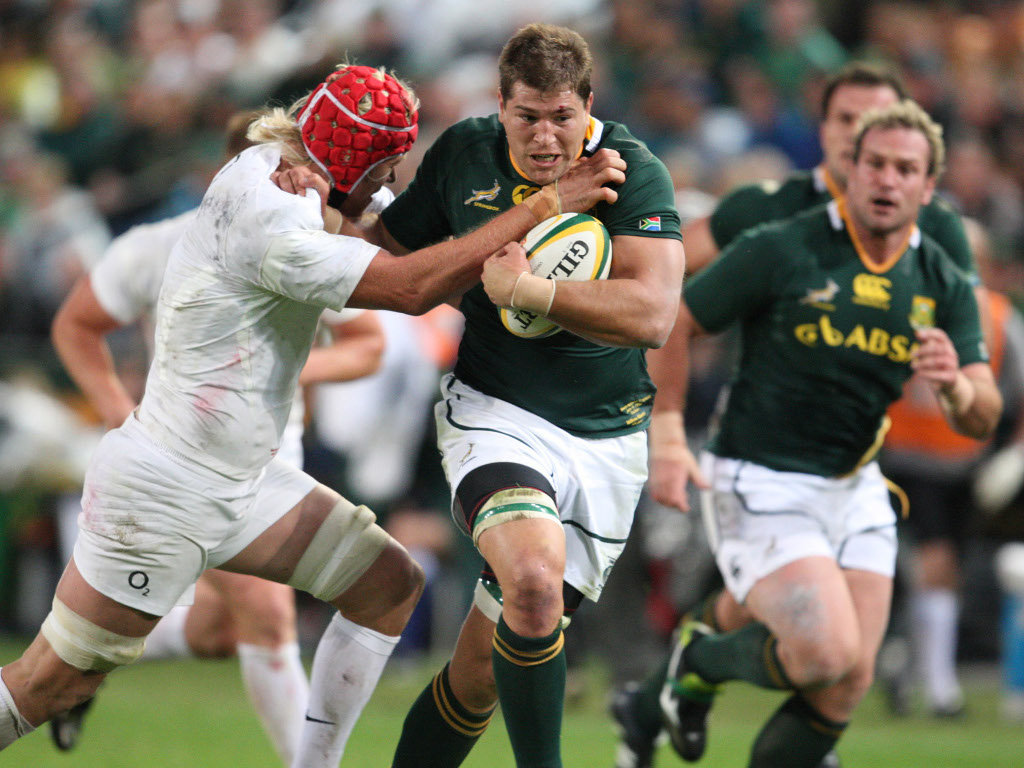 South Africa landed the first blow in their Test series with England as a strong second-half showing saw them win 22-17 on Saturday.

South Africa landed the first blow in their three-Test series with England as a strong second-half showing saw them win 22-17 in Durban on Saturday.

Tries from Morne Steyn and Jean de Villiers did the damage after the turnaround as the visitors struggled to repeat their impressive opening.

It was a deserved win for the Springboks however as they recovered well from a disappointing half that saw the sides go in with six points apiece.

England began in a cool fashion and looked comfortable in possession, taking all the correct options in the opening ten minutes. Ben Youngs was assured at the base while Dan Cole was hungry and Tom Johnson got through a great deal of carrying work as the Boks played second fiddle.

The visitors were rewarded for their efforts too as South Africa debutant Eben Etzebeth failed to roll away after a Cole carry. Consequently, Owen Farrell was able to send over the first points of the series from 40 metres out in the seventh minute.

But that sparked the Boks into life and it was their battering ram, Willem Alberts, who was creating the go-forward, resulting in Morne Steyn drawing his side level with fourteen minutes gone.

There was definitely a chess match feel to the action.

At 3-all the game began to pick up in pace as the likes of Ben Morgan and Chris Ashton made inroads through the heart of the Springbok defence. And Morgan's powerful surge – after a lovely late pass from Johnson – led to Marcell Coetzee offending. Farrell slotted it.

Pictures of the home coaching box illustrated the pressure on new coach Heyneke Meyer, who seemed worried about how his charges were fronting up in his first game at the helm. He wouldn't have to wait long for a reply though as England went offside and Steyn levelled.

That was how the scores stayed until the interval but that could and probably should have been different after Johnson used his hand on the blindside flank of a scrum just outside his own 22. Steyn called for the tee in the last kick of the half but the effort strayed wide.

Stuart Lancaster must have been delighted with how his team had fronted up in the first 40 minutes as they looked confident in their ability in both attack and defence, particularly at the breakdown as on three occasions they had turned over the Boks. That trend had to continue.

Meyer had different ideas though and seemingly rallied his team in the dressing room as England struggled to cope with the lift in intensity upon the resumption. Finally the host were able to enjoy a sustained period of ball as Bismarck du Plessis became prominent.

Cue 20 minutes of South Africa being largely in possession in England's half in a spell that led to Steyn having a mismatch against Johnson five metres out. He crossed for a try on 48 minutes before space opened up on the same wing 12 minutes later for De Villiers.

England were trailing 16-6 at that moment and desperately needed the next score, which they got in two-fold as Farrell sent over a couple of penalties, in the 63rd and 66th minute.

With ten minutes remaining in Durban the game was up for grabs but it was Steyn given the opportunities to see out the game and the Bulls number ten didn't misfire with his penalties, making it 22-12 before a late finish from Northampton's Ben Foden came as consolation.

South Africa meet England in the second Test match in Johannesburg next Saturday.

Man-of-the-match: Alongside hooker Bismarck du Plessis, flanker Willem Alberts carried like a warrior for South Africa. A mention for England debutant Tom Johnson for his first-half.

Moment-of-the-match: The try from Jean de Villiers was a sucker punch to England on the hour mark and put the Boks two scores up at 16-6. From that point on England were playing catch-up and in a second-half where they rarely threatened, the result was arguably settled.

Villain-of-the-match: Barring a bit of push and shove between Owen Farrell and Frans Steyn after the latter had kicked the ball at England's fly-half, it wasn't too feisty at all.